Warner Bros. Entertainment has announced that Hogwarts Legacy, the long-awaited and promising role-playing adventure game set in the universe of Harry Potter, not finally hitting stores this year, as originally planned. In this way, its new release date becomes 2022, although it has not been specified for when we can expect it, so we do not know if it will be early, mid or late. 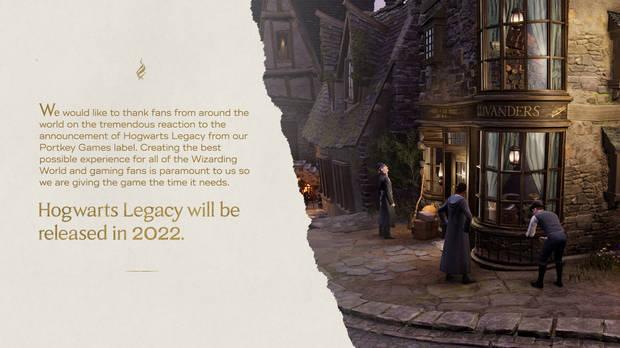 The only reason the editor has given for their delay is that they need more time for the game to be as good as they want, so we have no choice but to wait patiently to learn more details about it and a more specific release date.

Adventures at Hogwarts in the 19th century

Hogwarts Legacy ser an action, role-playing and open world game for PS5, Xbox Series X / S, PS4, Xbox One and PC that is being developed by Avalanche. One of the most interesting details about it is that it takes place in the 19th century, that is, a long time before the Harry Potter story took place.

In l we will be a Hogwarts student and we will have to become a great wizard while enjoying a completely original plot written exclusively for the game. During our adventures we will have to attend classes, deal with fantastic beasts, customize our hero or heroine, learn to make potions and, of course, master all kinds of spells and enchantments while uncovering a dangerous and dark secret that hides the famous school of magic created by JK Rowling, the original author of the books in which this entire universe of magicians and impossible creatures was born. Of course, Rowling will not participate in any way in the development of this video game, as confirmed by Warner Bros. after the controversies that have arisen around her for her controversial statements during the last months in relation to transgender people.