Marcin Iwinski, co-founder and deputy CEO of CD Projekt Red, has appeared in a video of around five minutes apologizing for the state in which Cyberpunk 2077 was published. take the blame, together with the board of directors, of the criticized versions of PS4 and Xbox One of the title, and explains why they were released in stores that way. It also offers a roadmap for 2021 without dates specific updates to bug fixes, DLC and upgrading to versions of PS5 and Xbox Series X / S.

“The console version of Cyberpunk 2077 did not meet the quality standards we wanted it to meet. I, and the entire leadership team, really feel this and in this video I accept responsibility for it, “Iwinski begins by saying.” Please, don’t blame any of our teams for what has happened. They are all incredibly talented and hardworking. “

“Myself and the board are the ones who make the final decision and it was our decision to launch the game“continues the manager.” Although, believe me, We never ever tried to make anything like this happen. I assure you that we will do everything we can to regain your trust. “Iwinski assures that during the testing or testing process did not come to light “many of the problems that you have experienced while playing the game. “

The founder of the Polish studio explains that as they approached launch day (December 10), see that the game on consoles improved every day: “[…] we really believed we could meet the final zero-day update. “It is because of the work on that patch, he says, that the media and critics did not receive the console versions until December 8. The PC version was released to the media in the first week of the same month.

The first major upgrade upgrade will arrive in 10 days

Iwinski ensures that the team is working on the future patches without doing “mandatory overtime” and ensures that “avoiding crunch in all our future projects” is one of the main priorities of the brand. On those patches, they promised two big updates to improve performance on PS4 and Xbox One (also with improvements on PC) in January and February. “The first update will be released in the next 10 days and be followed by a larger and more meaningful update in the weeks after. “

For the next few months they will regularly posting small and large patches for console and for PC that aim to offer “a better experience with the game”. The first free additional content they have been postponed to prioritize these improvements and more details will be released “in the coming months.” An image of an estimated roadmap indicates that the first free DLC will arrive sometime before mid-year, while the free update for Xbox Series X / S and PS5 I know go to second half of 2021. 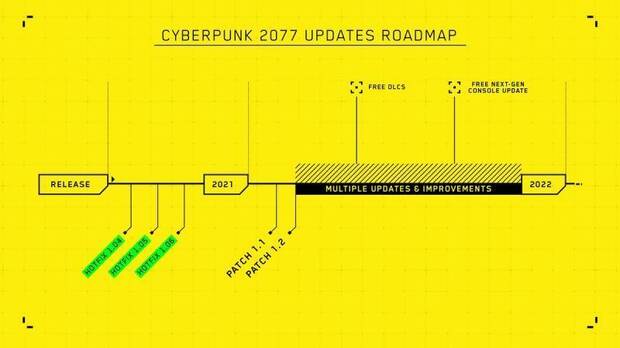 The difference between PC and consoles: “We made it even harder for ourselves”

The CEO has also offered a technical explanation on why are there so many differences between the computer versions and the PS4 and Xbox One versions; explains that the main problem is due to the internal data transfer speed consoles of the past generation. In addition, he points out that due to the way the game is developed, it is not easy to reduce its hardware requirements.

“Cyberpunk 2077 is ambitious in its scope, it has a multitude of personalized objects, interactive systems and mechanics”, explains the manager. “In the game, not everything is stretched out on level ground where we can make things less arduous for hardwarebut rather condensed in a large city and in a relatively unloaded environment. “To this we must add that the team focused on making the game “look great on computers” to later “adjust it to consoles; especially old-generation”.

However, although at first it didn’t seem like a “super difficult” task since they knew the difference in power between the systems, “time has proven that we underestimate the task”notes the CEO before explaining the problem in more detail: “The main culprit it was constantly having to improve our in-game streaming system for the old-gen consoles. “

“Streaming is responsible for ‘fueling’ the engine [grfico] with what you see on the screen and with the game mechanics, “he continues.” Since the city is so crowded and the disk bandwidth [duros] of the old generation consoles It is what it is, this is something that constantly put us to the test. “

Cyberpunk 2077 is available in stores in Spain (it was the best-selling game in GAME last month) and in the rest of the world since December 10 for PC, PS4, Xbox One and Google Stadia. However, the digital store PlayStation Store removed it from sale, although the study claims to be working with Sony to be available again for purchase on that platform “as soon as possible”. Likewise, Iwinski ensures that the promised returns are being executed: “[…] we just dispatched our first wave of refunds “.