If there is an announcement that in the recent Nintendo Direct could compete with that of Splatoon 3, it was Project TRIANGLE STRATEGY. You can see that Square Enix is ​​still betting heavily on Nintendo Switch, not content with having Bravely Default 2 just around the corner, continues to create sweets for the public of the Great N.

No you’re not dreaming, Octopath Traveler’s precious art style was introduced into the formula of an SRPG, which looks like a cross between the aforementioned title and a Final Fantasy Tactics. What we are most curious about is the matter of decisions and how they will affect the development of the adventure. At the same time it scares us, because if it is badly managed, it is easy for the differences between the routes to be negligible and for their quality to be diminished compared to if they had focused on following a straight line. For our part, it goes without saying that we will give it the opportunity, and you? While we proceed to lower the demo that is already available in the eShop, We leave you a fragment of the press release that Nintendo Spain sent us and incidentally we take the opportunity to attach some images that are translated into Spanish.

“This title continues SQUARE-ENIX’s celebrated legacy of strategy and role-playing games. The battles take place on terrain with different elevations, so the range of the character’s attacks will depend on his position and the weapons he has equipped: it will be essential to study the battlefield carefully before taking action. In addition, the decisions that are made at any given time will affect the development of the story and determine which characters will join the cause of the players. Project TRIANGLE STRATEGY (working title) is coming exclusively to Nintendo Switch in 2022. On the other hand, a free trial version of the game can be downloaded from the Nintendo eShop… starting today! ” 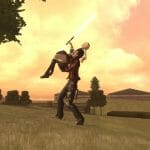