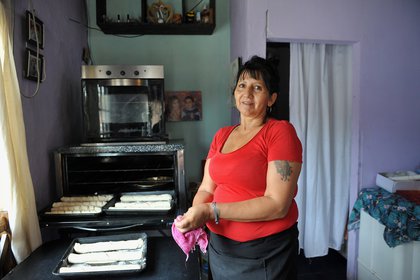 Photograph dated January 28, 2021 of María Fernanda Blanco who is under house arrest pending a final sentence for the crime of possession of drugs for commercialization, in San Fernando (Argentina). . / Enrique G. Medina

Buenos Aires, Feb 23 . .- The increase in the female population serving in prison for drug-related crimes in Argentina highlights the tensions of a system that does not contemplate the helplessness in which the children of the detainees remain, who most of them are the sole breadwinner in the home.
In a tiny house in San Fernando, a few kilometers from the city of Buenos Aires, María Fernanda Blanco is under house arrest pending a final sentence for the crime of possession of drugs for sale.
Until June 2020, Fernanda, 51 years old and a mother of eight children, was housed in one of the many prisons she passed through. All those times he had to leave his children alone or distributed among relatives.
Fernanda met jail for the first time at the age of 24. At that time, he already had three children and an ex-partner whom he had abandoned, fed up with the constant beatings to which he subjected her.
“I didn’t have help from anyone. I had a profession, I had studied pastry, bakery, but no matter how much you have the profession you have, if you don’t find another way out …” he muses.
Without a home or job, and with her children in charge, she chose to follow in the footsteps of relatives who were already doing drug dealing (retail drug trading).
“I should have looked for help somewhere, but I didn’t think it existed either,” he says.
Over the years, she and her children went through a lot. Along with two of the youngest then, she was detained for several weeks in a ward of the Ezeiza prison, the same prison where years later she carried out part of the pregnancy of her youngest son, now 10 years old.
“They passed the thousand and one, because they suffer the consequences more (…) in this last cause sometimes I called and they were without gas and the world was collapsing, that is the reality,” says an anguished Fernanda.
From his current home confinement, where he lives with several of his children, he sews clothes for the parish and bakes bread and dough, tasks, some of them, which he learned in the courses offered by the NGO “I did not go”, one of the few that help incarcerated women.
There Fernanda waits for Justice to be issued on the appeal of her sentence: “I am prepared for everything, so that they can say that the sentence was final or that I am free, nothing is eternal, and in the meantime I will continue to make a good life and try that my children start together with me “, he assures.
CONSEQUENCES OF FEMALE INCARCERATION
Fernanda’s case is not very different from that of dozens of women. In the last 15 years, the female prison population in Argentina increased 103%, and although they only represent 4.4% of the total inmates, 45% of them are detained for causes related to the drug law (23,737) .
“This has to do with an increase in the persecution of drug crime, as well as an increase in vulnerable populations, because we are generally talking about poor women,” says Macarena Fernández Hofmann, researcher with the Criminal Policy and Violence in the Confinement team. of the Center for Legal and Social Studies.
“It is a punishment that breaks those lives into a thousand pieces,” says the expert, “separates the mother and ‘children'” and at the same time affects other family members, who must take charge of a situation, which can carry a very economic burden. big”.
For Fernández Hofmann, these issues are completely invisible by the Judicial Power, which determines the punishment, and by the Executive Power, which must accompany these women.
HOME PRISON AND PANDEMIC
The pandemic revealed the inability of the health care system for incarcerated populations, who in many cases are housed in overcrowded facilities.
As a consequence, many women at risk, and who were already in a position to request benefits such as home arrest, were favored by the streamlining of the process.
“We are not talking about freedoms, we are talking about people who went to house arrest with wristbands, the situation is still one of deprivation of liberty,” explains Hofmann.
There was then a decrease in the population of imprisoned women, many of whom were with their children, a “benefit” that allows mothers to live in prison with children under 5 years of age, the same happened with pregnant detainees.
“It is very important that women who are detained can access this benefit, basically because that implies that they can be with their ‘children'”, underlines Fernández Hofmann.
However, he clarifies that since there are no policies in this regard, they become “an even more invisible population”, since “they are locked up with their children in their homes, without any type of assistance”, often in highly vulnerable situations.
DEPRIVATION OF LIBERTY AND STATE POLICIES
“What you see with respect to the approach to criminal prosecution is that it falls on the smallest links, because obviously the woman who markets in a retail way, such as the ‘mule’ woman, is the most persecuted. All that effort and expense is focused on situations of vulnerability “, says Fernández Hofmann.
Meanwhile, the issue of children with detained adult references is “invisible”, since there is no policy on the subject and there is no accompaniment of women and men who leave prisons, “there are years and years in which that this policy is relegated. “
“Each of these stories is a story of vulnerability, poverty, exclusion. Sometimes the State exercises it directly, sometimes indirectly because of its lack, but when you put the magnifying glass you find all that,” says the specialist.
“When you see it in specific populations such as women, that explodes even more in the face, due to the affectation that the ‘children’ have,” he concludes.
Julieta Barrera