It is said that the Prince William accused Prince Harry of putting fame above family, after the explosive interview with Oprah.

“The conversation Harry and William had after the big interview did not end well,” said the insider of the brothers, who have not seen each other for a year when Harry separated from the royal family with his wife Meghan Markle.

Prince Harry and Meghan Markle after renouncing the royalty went to Canada, as no one there paid attention to them, and finally they moved to Los Angeles and bought a multi-million dollar property in Montecito, Santa Barbara, California. According to the report, the Duke of Cambridge is not pleased with the way his younger brother is adjusting to his new life. 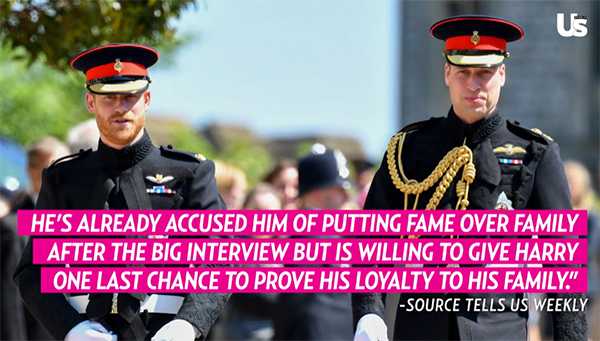 “William feels that Harry has grown bigger since he moved to California – that success and Hollywood has gone to his head,” says the source. “He has already accused Harry of putting fame above family after the interview.”

The siblings – whose strained relationship has been the subject of intrigue over the past few years, will gather this summer for the unveiling of the statue of their mother Princess Diana. While “William insists” on seeing his brother before the event, the source told Us that the Archewell founder “refuses to meet” and “will not take orders” from anyone.

“If Harry misbehaves that day or worse, he doesn’t show up, William will never forgive him.”