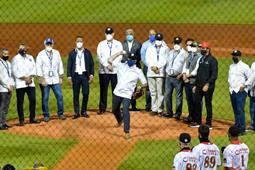 President Luis Abinader held this Sunday the launch of honor of the inaugural match of the 2020-2021 season of the Lions of El Escogido against the Tigres del Licey at the Quisqueya Juan Marichal stadium.

After pitching, the president highlighted the commitment of the Dominican Government to successfully develop the current autumn-winter campaign of the Professional Baseball League of the Dominican Republic (LIDOM) that will have 30 games in the regular series that will be extended until next December 20.

“It was what we had to do so that the whole country could enjoy winter baseball,” said the head of state, referring to the government’s effort to make the current season possible.

Abinader, who said that he grew up and played ball alongside former Lions general manager Moisés Alou, said he hopes to honor the great Dominican players who have excelled in the Major Leagues from the government.

“I hope, on behalf of the Dominican Government, in the next few days to recognize those older players, we are working on that,” the president revealed.

The president also referred to the atypical season due to the absence of fans due to the pandemic, and said that he makes efforts through the Ministry of Public Health so that within the sanitary controls, from now on they can attend fans to the stadiums .

“We are studying to see in what way we can make that with a special distance the Dominicans can come to watch the games. We are going to see how and when it will be possible to open up in that sense, always taking into account everyone’s safety.