This Thursday the members of the DES collaboration (Dark Energy Survey or mapping of dark energy) have presented in a virtual seminar and through 29 scientific articles the most accurate measurements of the composition and growth of the universe obtained so far.

The new results, which use the largest sample of galaxies ever analyzed in cosmology and cover a huge region of the sky, show that, in general, the way the subject is distributed in space is consistent with the predictions of the standard cosmological model.

The Dark Energy Survey (DES) collaboration has created the largest and most accurate maps of the spatial distribution of matter, both ordinary and dark, in history

Over six years, DES observed 5,000 square degrees (almost one eighth of the celestial sphere) in 758 nights, cataloging hundreds of millions of objects. For the moment, the results presented now have been obtained from data taken during the first three years of the project (226 million galaxies observed in 345 nights) to create the largest and most accurate maps ever made of the distribution of matter in the recent universe.

Map of the distribution of matter (especially dark) made from measurements of the gravitational lensing effect in 100 million galaxies. The map covers about one-eighth of the sky and several billion light-years in extent. In the yellow regions there is a concentration of matter greater than the average, while in the black regions there is less. The rectangle at the top left widens the region marked in light blue. The dots are clusters of galaxies identified in the images, most likely to be found in areas with a higher concentration of matter. / DES collaboration

Since DES studies both nearby galaxies and those billions of light-years away, its maps provide a large-scale panoramic picture of the universe as well as a movie of how that structure has evolved over time. of the analyzed period: last 7 billion years.

To test the current model of the universe, DES scientists have compared their results with measurements made by the Planck space observatory of the European Space Agency (ESA).

Planck used the light signals known as the microwave background radiation to observe the early universe, only about 380,000 years after the Big Bang. The Planck data also provides a very accurate view of what the universe looked like 13 billion years ago, and the standard cosmological model predicts how the distribution of dark and ordinary matter should have evolved up to the present day.

Evidence that does not fit the theory

If DES observations did not fit this prediction, it is quite possible that there were aspects of the universe not yet discovered. Although the published results are consistent with the prediction, there is still evidence, both in DES and in previous experiments, that matter in today’s universe is distributed, by a small percentage, more evenly than predicted, an intriguing finding. it deserves further investigation.

The DES results are consistent with the standard cosmological model, but show that the matter in our universe is distributed, by a small percentage, more evenly than predicted, an intriguing finding that deserves further investigation.

The Ordinary matter makes up only 5% of the universe. Dark energy, which according to cosmologists produces the accelerated expansion of the universe counteracting the force of gravity, accounts for almost 70%. The remaining 25% is dark matter, whose gravitational influence holds the galaxies together. Both dark matter and dark energy remain invisible and mysterious, but DES tries to reveal their nature by studying how the competition between the two shapes the large-scale structure of the universe throughout cosmic history.

“DES has succeeded in restricting the properties of dark energy to a level of precision that rivals and complements that obtained by studying microwave background radiation,” he says. Ignacio Sevilla, a scientist at the Center for Energy, Environmental and Technological Research (CIEMAT), “and it is exciting to have achieved one of the most precise measurements ever obtained of the fundamental properties of the universe.”

The analysis and photographed the night sky has been carried out using the Dark Energy Camera (DECam), 570 megapixels, installed on the 4m diameter Víctor Manuel Blanco telescope, located in the Cerro Tololo Inter-American Observatory, in Chile. DECam, one of the most powerful digital cameras in the world, was designed specifically for DES and was assembled and verified in Fermilab (United States), with an important Spanish contribution. 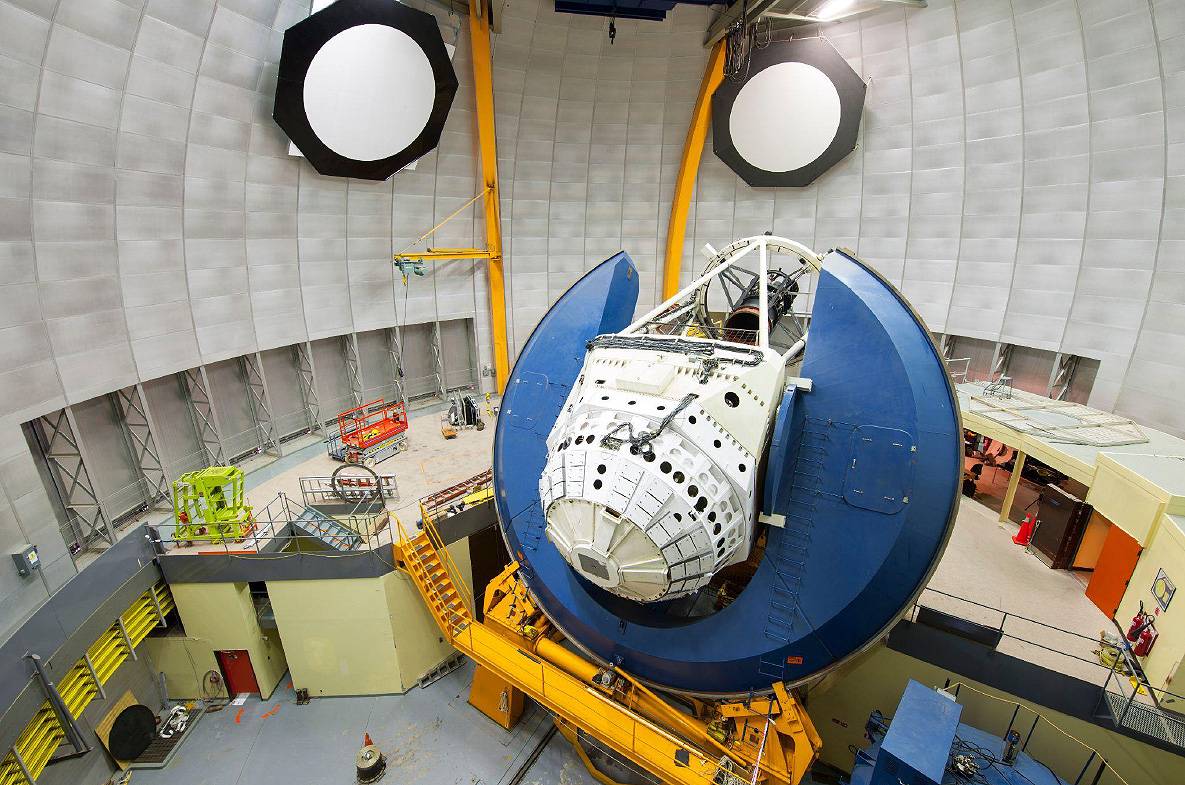 White Telescope from which the DES project has been carried out. The black cylinder contains DECam, the powerful camera with which the images of galaxies have been taken, and in whose construction Spanish groups played an important role. / Reidar Hahn and Fermilab.

“The challenge was of unprecedented complexity, it involved a multidisciplinary team of hundreds of people, an investment of millions of hours in supercomputers and required the development of techniques that will mark the future of the field in almost all aspects of analysis,” he says. Martin Crocce, researcher at the Institut de Ciències de l’Espai (ICE, IEEC-CSIC). “We are entering a new era of our global understanding of the universe – he adds – with direct observations, ranging from the early universe, with 380,000 years, to the recent universe, 13 billion years later.”

Two physical phenomena to study the dark side

To quantify the distribution of dark matter and the effect of dark energy, DES relies primarily on two physical phenomena. First, that at very large scales galaxies are not distributed randomly through space, but rather form a spiderweb-like structure as a consequence of the gravitational pull of dark matter. Researchers have measured how this cosmic spider web it has evolved throughout the history of the universe. The clustering of galaxies that make up the cosmic web, in turn, reveals the regions that contain a higher density of dark matter.

Second, DES detects the trace of dark matter using the weak gravitational lensing effect. When a distant galaxy emits light, the trajectory of the photons that compose it is disturbed by the gravitational effect exerted by the distribution of masses that are along its path. As a consequence, when we observe this galaxy, its shape is very slightly different from the original one, and the pattern of these distortions depends on the quantity and distribution of matter along the path of the light.

These are the largest matter maps ever created, covering an eighth of the sky and showing mostly dark matter, which does not emit light and cannot be detected by traditional methods.

“By analyzing the subtle distortions of our 100 million galaxies, DES has been able to trace the distribution of matter that produces them,” he explains. Marco Gatti, Predoctoral Researcher at IFAE (now at the University of Pennsylvania).

“These are the largest matter maps ever created, they cover an eighth of the sky and show, above all, dark matter, which does not emit light and cannot be detected using traditional methods,” the researcher emphasizes.

This analysis has been partly possible thanks to new techniques for modeling large-field maps and large simulations carried out by Spanish groups and distributed on a Big Data platform (CosmoHub) housed in the Port d’Informació Científica (PIC), a CIEMAT and IFAE data center.

“A key point has been the development of new methodologies to measure the red shift of the 100 million galaxies, directly related to their distances, which makes it possible to produce a 3D map of the universe,” he points out. Giulia Giannini, researcher at IFAE.

Data from the first three years of the project are presented, but DES’s final analysis, with twice the number of galaxies, is expected to extract an even more accurate view of the dark matter and energy in the universe.

This and other advances have allowed the team to determine the density and uniformity of the universe with unprecedented precision. “Among many other factors, we have corrected for the impact of external elements, such as stars or atmospheric effects, on our data.” He says Martin Rodriguez Monroy, researcher at CIEMAT.

Along with analyzing the signals from the weak gravitational lensing effect, DES also measures other indicators that constrain the cosmological model in independent ways: the distribution of galaxies at very large scales (the acoustic oscillations of baryons), the number of clusters of massive galaxies and high-precision measurements of the brightness and redshift of so-called type Ia supernovae.

“The DES data is unique because it allows us to test the cosmological model by studying very different phenomena,” he says. Santiago Avila, IFT researcher, who adds: “The largest scales reveal some sound waves generated in the early universe (the acoustic oscillations of baryons) and also how the first structures were formed from quantum fluctuations generated during cosmological inflation” .

DES completed its observations of the night sky in 2019. The team is now ready to tackle the full data set, which will double the number of galaxies used in the results released today. The final DES analysis is expected to extract an even more accurate view of the dark matter and dark energy in the universe.