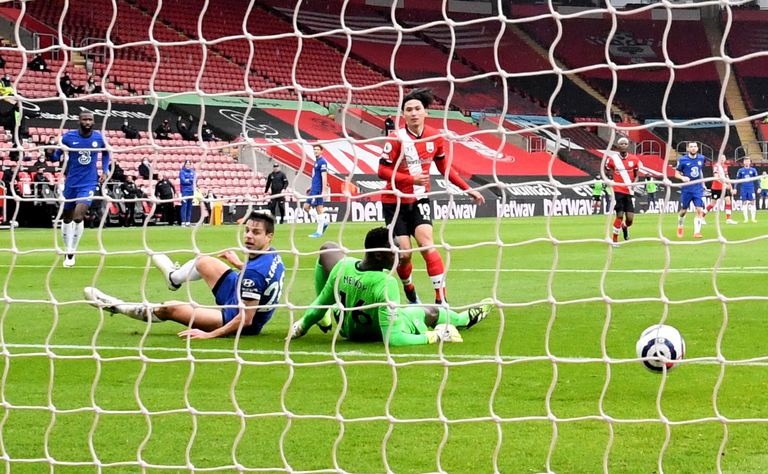 Thomas Tühel’s Chelsea marched very proud when they drew at Saint Mary’s. Three days after facing Atlético in Bucharest in the first leg of the Champions League round of 16, the London team was unable to penetrate with solvency the most bored defense of the Premier. Southampton had just conceded 20 goals in six consecutive league defeats but Chelsea only beat them from a penalty to tie. Minamino’s goal in the first half, a feast for the eyes of the home crowd, exhibited the sudden doubts that assail Chelsea at the most delicate moment of the season.

“In the first 80 meters we played clearly well and in the last 20 clearly not,” said Tuchel at the end of the evening. “We created a lot of space for our attackers but the decisions at the time of the last pass were not good. We lacked timing ”.

The London team stabilized after the traumatic dismissal of Lampard and linked a draw and five victories. Nothing suggested that he would find big problems in Saint Mary’s, the field of the most beaten team in the Premier so far this year. But Tuchel made modifications to the mold of his system. There were two changes. He removed Jorginho from midfield and instead paired Kanté with Kovacic; and replaced Kepa after two consecutive starts to restore Mendy under the sticks. Goalkeeping mysteries aside, the team suffered with Jorginho’s departure. The absence of the most conscientious midfielder from the squad, suddenly sitting on the bench, exposed Chelsea to Kovacic’s defensive vagaries and Kanté’s lack of organizational sense to take over all maintenance and logistics services. Kanté is a two-stroke engine, he is inexhaustible and he is also a good footballer, but the company assigned to him surpassed him because neither Werner, nor Mount, nor James knew how to alternate their supports.

Tuchel has devised a plan to double the wings with the playmakers, Mount and Werner, and the wingers, James and Alonso. Above it crowns the pyramid with a point, which this time was Abraham and other times it is Giroud. For the machinery to work smoothly, players must receive the ball early in advanced positions. This did not happen because neither Kovacic nor Kanté gave speed to the game, nor did Mount know how to hook with recurring punctuality. Sometimes yes sometimes no. Chelsea was in that dilemma when Redmond put a low pass that put a very serious question on the back of three visiting centrals. Contemplative Kovacic and Kanté surprised, the ball continued its course without Zouma noticing that Minamino was unmarked behind him. The only one who saw him was Azpilicueta. The Navarrese guardian, always attentive, went to put out the fire but arrived when the house was ashes. Hand in hand with Mendy, the Japanese Minamino made a feint worthy of the most suffocating pasture in Lomas de Zamora. After the goal, he defined with a slap. With the outside.

Tuchel tried to repair the damage after the break. He removed Kovacic to let Jorginho take the helm and brought in Hudson-Odoi to replace him with Diyech within half an hour. The decision visibly upset the outgoing player and Tuchel pointed it out at the press conference. “I did not feel that Callum [Hudson-Odoi] he was totally involved in the game, I didn’t see him attentive in the pressure after loss; we cannot save 5% of energy ”, he said. “It was a difficult decision but tomorrow we will forget everything and focus on Atlético.”

Tuchel’s changes did not refine the team in the last meters. The team only got out of trouble in part, thanks to the coincidence of Mount’s noble effort and accidental action.

The British media machine, and also the continental one, remains suspended before Jason Mount. The pundits repeat that the young Englishman is already a great player. The appearances are magnificent: lungs, dedication, professionalism, class to shape, control and hit. Even a recognizable toupee. It remains to be known, however, if he has the intellectual stature to manage in his head the full matches (not enough with the highlights) of a giant team that last summer made the largest investment in transfers in the world: about 250 million of euros. Against Southampton, Mount did not find the thread of the plays in the last third of the field. He redeemed himself when Danny Ings, the rival forward, made him an absurd penalty. From its execution it derived the 1-1. But Chelsea did not go beyond there and his coach was tense when in the subsequent press conference they asked him if he did not think that his job consisted of amalgamating an expensive squad: “My job is to win games not to make some guys play who have cost a lot of money”. On Monday they travel to Bucharest with a bad body.

Meanwhile, the Merseyside derby was played at Anfield. Liverpool lost to Everton for the first time in 22 years and made their fourth straight loss (0-2) for the third time in club history in the Premier League, deepening their incredible epidemic of injuries in the center of defense. The misfortune that began in the first leg derby at Woodison Park on October 17, when Pickford broke Virgil van Dijk’s knee, culminated yesterday when Henderson had to retire from the field with a muscle tear in the first half. Henderson, a natural midfielder, had patched up the defense along with Fabinho, another inside who was injured weeks ago in his attempt to fill the gap previously opened by the misfortunes of Matip and Gomez.

Ancelotti’s Everton reaped the benefits of the subsequent decline. Richarlison, author of the 0-1, and Calvert-Lewin, who caused the penalty of 0-2, exploited Liverpool’s lack of coverage.

The defeat places Liverpool in sixth position in the standings, equaled 40 points with Everton, which is seventh. West Ham thus enters, temporarily, in fifth place with access to the Europa League.