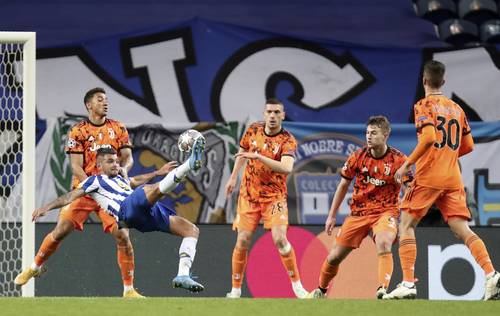 Port. Porto surprised by beating Juventus 2-1 in the first leg of the Champions League round of 16, a result that forces Vecchia Signora to win in the second leg to avoid another setback in the top European competition. while Borussia Dortmund beat Sevilla 3-2.

The champion of the most recent nine Scudetti of the Italian Serie A and that in the past three editions of the Champions League has not passed the quarterfinals, was frozen by two goals in the first bars of each half of the game, the work of the Iranian Mehdi Taremi (2) and Malian Moussa Marega (46). Federico Chiesa, in ’82, restored hope for the return to Turin, while star Cristiano Ronaldo had a lackluster performance.

Juve was barely able to cope with an efficient, patient and well-organized Porto, but that final goal away from home may have a vital weight heading into the second game on March 9.

When just 63 seconds of the game had elapsed at the Estádio do Dragao, a compromised loan from Uruguayan Rodrigo Bentancur to his goalkeeper Wojciech Szczesny was used by Taremi to throw himself to the ground, steal the ball and reach the nets. It was the second fastest goal in the history of the Champions League in a direct elimination match.

The first is occupied by the Austrian of Bayern Munich, David Alaba, precisely in a match against Juve in the quarterfinals in 2013, at 24 seconds.

Again the Vecchia Signora returned from the locker room far from the maximum concentration. Only 21 seconds after the Spanish referee Del Cerro Grande decreed the resumption, the winger Wilson Manafá filtered down the right, near the end line he gave back to the forward Marega, who controlled and finished with a low shot.

The Mexican Jesús Tecatito Corona, who was the starter, looked for the nets when trying a Chilean that was deflected by the goalkeeper of the Italian team. Despite the mood shown by the tricolor, the play was invalidated by a previous offside.

Juve had not made merits until then for a better result. But when the match languidly consumed the last minutes, Frenchman Adrien Rabiot enabled Chiesa, who first beat Argentine goalkeeper Agustín Marchesín to discount on the scoreboard.

Portuguese star Cristiano Ronaldo was missing, as was almost the entire team, and only appeared in compensation time to claim a penalty, but the whistler did not even resort to VAR.

We have studied Juventus well. The team assimilated the coach’s idea very well. We knew we had to push hard so that they didn’t play their game, said Pepe, a Porto defender.

Although Chiesa ended Porto’s five-game streak without conceding a goal in the Champions League, Juve could not prevent the Portuguese from signing their first win against the Bianconeri in European competition.

We serve them the game they wanted on a silver platter. It is normal that there is a bit of fatigue after so many games played, it is not easy to always maintain the same rhythm and level of concentration. Fortunately we managed to stay in the race, said Andréa Pirlo, Vecchia Signora coach.

Meanwhile, a great display by Norwegian Erling Haaland, author of two goals and one assist, allowed Borussia Dortmund to beat Sevilla 3-2 to get closer to the quarterfinals of the Champions League.

Sevilla took the lead with a goal from Suso (4), but the Iranian Mahmoud Daoud balanced (19) after a great individual action by Haaland. The young Norwegian striker finished the comeback (27, 43), although the Dutchman Luuke de Jong cut distance for Sevilla at minute 84 of the game.