Although the model was presented just over a year ago, the German firm wanted to include the spectacular Porsche 917 Living Legend concept as part of the #PorscheUnseen promotional initiative. Taking advantage of this occasion, some unknown details of the model and a new name have been revealed.

Although the #PorscheUnseen initiative of the German brand aims to unveil prototypes and secret projects that until now had remained hidden from the public, a few models that had actually already been presented previously have also been included, such as the spectacular Porsche 917 Living Legend concept, a design study that was unveiled last year and that until now we knew simply as the 917 concept.

This striking prototype is truly a full-scale model that was unveiled to mark the 50th anniversary of the birth of the original Porsche 917, which was unveiled and premiered in competition in 1969. This new modern variant was unveiled in March 2019 and he was one of the exceptional protagonists of the “Colors of Speed” exhibition that the German brand organized in its museum last year. 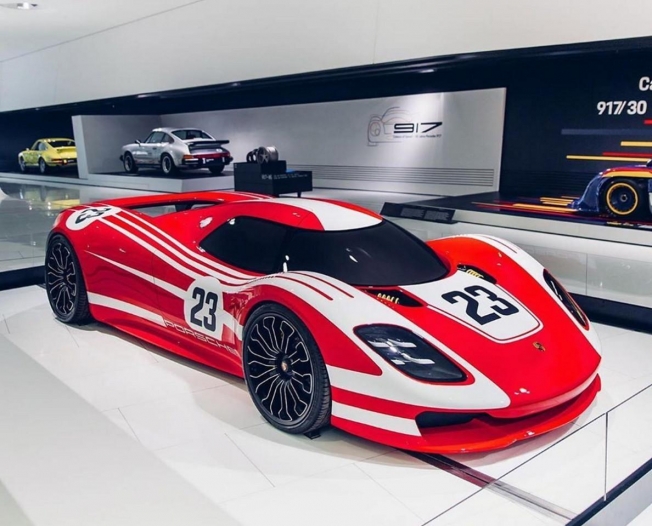 The Porsche 917 Living Legend concept in the Porsche Museum.

This model starred in a strange anecdote a few months ago when some journalists discovered the patent sketches of this model and thought that it was a new hypercar from the German company. The reason for the confusion was quite simple, since the sketches used for said record showed some details that were not present in the scale model presented, in addition to having a very different image due to the lack of color in the sketches themselves.

The Porsche 917 Living Legend Concept is one of those projects that were born with the sole purpose of answering a question that begins with the expression “What if …?”. In this way, the designers of the German brand presented their personal vision of what a modern variant of the model might look like, taking as inspiration the example of the Porsche 917 KH that won in the 24 Hours of Le Mans in 1970, from which it even inherits its iconic red and white livery.

The truth is that the German company hardly revealed a single detail when it presented this curious prototype in 2019. It limited itself to saying that it had been created as a tribute to the 50th anniversary of the original competition sports car. However, thanks to the new #PorscheUnseen initiative we have discovered some new details about this model, such as that had been created long before the anniversary celebration. This prototype was made in 2013 and also, yes it had a specific mechanical baseWell, now we know that it was developed taking into account the technical scheme of the Porsche 918 Spyder.