One of the models included in the #PorscheUnseen initiative has been the radical Porsche Boxster Bergspyder, a strange single-seater variant of the Porsche Boxster that although it was unveiled a few months ago, the truth is that it was developed in secret a long time before.

One of the few models presented by the peculiar #PorscheUnseen initiative of the German brand that we already knew is the Porsche Boxster Bergspyder, which was presented in the middle of last year 2019. Although the first images of this strange variant of the German roadster had already been published, it does not mean that we knew too many details about this peculiar design study, which will be fully detailed in the new Porsche Unseen book from the Stuttgart firm.

This quirky single-seater speedster-type open variant really pays homage to the classic Porsche 909 Bergspyder, a racing variant that was launched in 1968 in response to the Ferrari 212 E Montagna and that he had a ridiculously low weight figure, 384 kilos, so It is the lightest competition model manufactured by the brand. This new Bergspyder variant, on the contrary, throws a weight on the scale of 1,130 kilos. Which is not bad at all if we take into account its size. 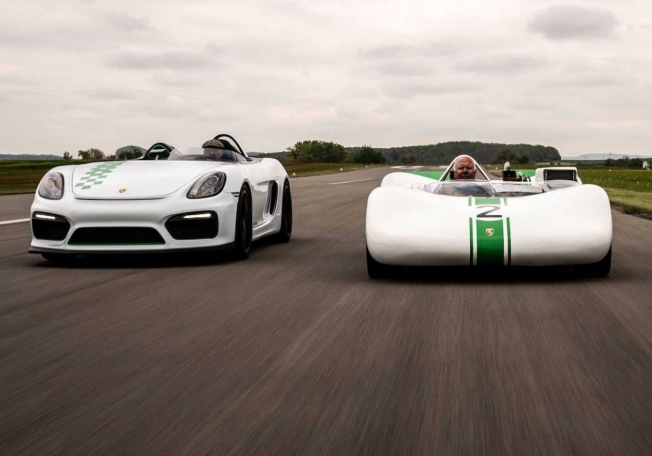 The original Bergspyder was quite a miniature and a featherweight.

The new model was presented in 2019, on the occasion of the Gaisberg Hillclimb, the famous Austrian climbing event, and it is located in the brand museum in Stuttgart, although the truth is that it had been created quite a long time before, in 2014. This is one of the details that the German firm omitted during its presentation last year.

To recreate the radical look of the classic trolley, Porsche designers based on a 981 generation Porsche Boxster, eliminating its conventional windshield to adopt a very small drift behind which is the dashboard of the Porsche 918 Spyder. The cockpit was also modified to turn the passenger side into a large chest to store the helmet that is covered by the covers and elements that give the Boxster this single-seater silhouette. The decor is complemented by touches of green in various areas, including the brake pads, to recreate the aesthetics of the original model.

Unlike the rest of the models presented by the #PorscheUnseen initiative, the radical Boxster Bergspyder is a true functional model, as we can see in the images in which he appears taking a walk through the Alps or sharing a circuit with the original 909 Bergspyder. This variant does not employ the mechanics of the conventional Boxster, but rather the 3.8-liter flat 6-cylinder block from the Porsche Cayman GT4 that delivers 393 hp. This allows the attractive car to complete the 0-100 km / h in about 4 seconds.