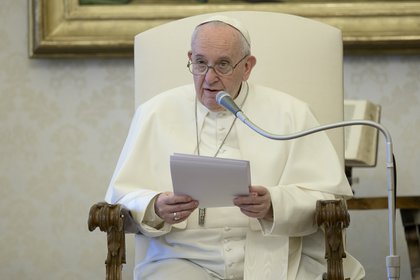 The Pope has alerted young people to consumerism that “deactivates originality” and “homogenizes” society, while urging them to fight against the culture of “use and throw away”.

“To choose, especially today, is not to allow oneself to be domesticated by homogenization, it is not to allow oneself to be anesthetized by the mechanisms of consumption that deactivate originality, it is to know how to renounce by pretending and showing oneself. Choosing life is to fight against the mentality of using and throwing away and completely and quickly, “Francis pointed out during the mass, which was celebrated in the Basilica of St. Peter of the Vatican in an act reduced by the sanitary provisions established in the face of the pandemic.

Likewise, during the homily, Francis attacked “the fever of consumption, which narcotizes the heart with superfluous things.” It has also warned of the “obsession with fun, which seems the only way to avoid problems”, but only postpones them.

Thus, he has reproached that in today’s youth society “there is a fixation on the claim of their own rights” and they even forget “the duty to help.” For this reason, he has vindicated true love, which is above all “gift, choice and sacrifice”, as opposed to “the great illusion about love, which seems something that must be lived by dint of feelings.” In this way, he urged young people “not to give up their big dreams” and not be content “with what is due”, but to seek “high goals, with joy and audacity”.

“We are not made to dream about vacations or the weekend, but to make God’s dreams come true in this world,” he said.

The Pope has also stressed to young people the importance of making “firm” and “fundamental” decisions in life. As he has pointed out, banal elections lead to a “banal life”, while large elections make life “great.” And he has specified: “We become what we choose, for better and for worse. The beauty of the choices depends on love.”

During the ceremony, a group of young people from Portugal received from the Panamanians the wooden cross – which symbolizes the World Youth Days (WYD) – and an icon of the Virgin ‘Salus Populi Romani’.

This Sunday’s mass marks the beginning of the road to WYD in Portugal, which will take place in that country in 2023. This act was postponed in April during the confinement that Italy experienced to stop contagion in the first wave of the pandemic.

The Holy Father has also announced that from 2021 the diocesan WYD, which each diocese develops, will be celebrated on Christ the King Sunday instead of Palm Sunday.