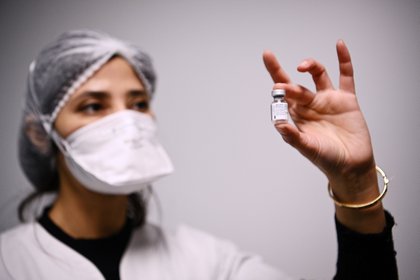 Brussels, Jan 13 . .- The CEO of the pharmaceutical company Pfizer, Albert Bourla, said on Wednesday that the vaccine against Covid-19 that they have developed together with BioNTech has shown high efficacy against new variants of the virus in experiments done so far, although clinical results have yet to be analyzed to be certain.
“We have done several ‘in vitro’ experiments and there appears to be a very, very high efficacy of the Pfizer / BioNTech vaccine against the two new variants, both the UK and South African variants,” Bourla told a conference on the European Union and health organized by the European People’s Party (EPP).
This is “a very clear indication, but we have to also measure clinical results to be sure. But, in my opinion, I think the results will be very positive,” he added.
Bourla explained that right now the pharmaceutical company is analyzing whether, in addition to protecting against Covid-19, its vaccine prevents the transfer of the virus, something on which there are still no conclusive results.
In animals – he said – a “significant protection” has been detected in terms of the transfer of the virus and, although it has not yet been tested in humans, Pfizer has “encouraging data” and could learn more in this regard next February.
The CEO of the US pharmaceutical company said that right now they are focusing their efforts on improving their capacity to produce the vaccine around the world and hope to “dramatically increase” production.
“We hope to be able to deliver 2 billion doses this year, compared to the 1.3 billion we had before, and the efforts do not stop,” said Bourla, who attributed the bottlenecks to the fact that it is the first time that this vaccine has been produced and it is being done in extraordinary quantities.
The EU, he added, has acted “quite quickly, especially in this second phase”, to secure a significant number of doses of the Pfizer / BioNTech vaccine, a large part of which will arrive soon.
Specifically, the European Commission negotiated before the efficacy of the vaccine was confirmed a contract to obtain 200 million doses of it, with the additional option of receiving another 100 million.
Brussels implemented this option after authorizing the use of the vaccine in the EU and, of these 100 million, 50 million doses will be delivered in the second quarter of 2021, according to Bourla.
In January, the Commission closed a new agreement to obtain an additional 300 million and, of this, 75 million will also arrive in the second quarter of the year.
These amounts are in addition to the doses that are already arriving for vaccination campaigns in different European countries, where criticism has come due to the slowness of the immunization effort.
Bourla said, on the other hand, that they are evaluating whether it is possible “to produce a version that can be published” of the contracts signed between Pfizer and BioNTech and the EU since, although these are confidential, in Europe “it has become an issue very sensible”.