The future of high-performance cars, whether we like it or not, is in question. Pollution regulations have no mercy on funny, incorrect and inefficient cars, sadly. We are witnessing a mass extinction of sports cars, but there may be light at the end of the tunnel. That light is the sports plug-in hybrids, cars that promise to combine performance, efficiency and driving fun. Cars like him Peugeot 508 PSE. Will he be able to convince a purebred petrolhead?

PSE stands for Peugeot Sport Engineered, and it is the surname that Peugeot sports cars will have from now on. There are great chances that the initials GTi will never return to the tailgate of a Peugeot, since the future is presented in a very different way. Lightweight, affordable cars powered exclusively by powerful internal combustion engines give way to plug-in hybrids. But Peugeot wants us to continue getting excited at the wheel, and for this, they present us with a 360 hp sports saloon with a simply sculptural look.

The Peugeot 508 PSEs are offered in both a saloon body and a SW station wagon body. 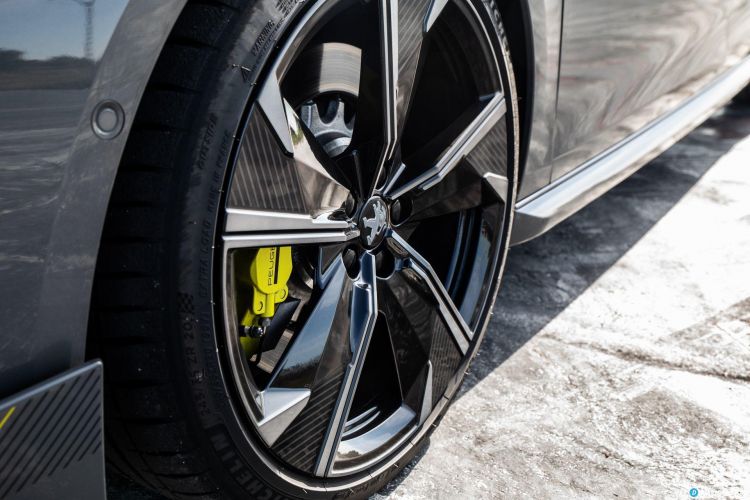 Before getting into flour, I want to make a brief reflection on the design of the Peugeot 508 PSE. Personally, I think that Peugeot is in a golden age as far as design is concerned, and the car that best represents it is the Peugeot 508. The acronym PSE gives the precious 508 the aggressiveness that we could miss in its GT Line versions . The GT Lines are somewhat restrained, but 508 PSE show their claws without shame. They do it with a multitude of specific design details, which together clearly make a difference.

For a start, the “Selenium Gray” color of the test unit is exclusive to PSEs. So are your 20 inch black rims and aerodynamic design, wrapped in Michelin Pilot Sport 4S tires. Its grille becomes black, curdled with aggressive design slats. An aggressive design patent on its specific bumper, which highlights both the lower aerodynamic lips and the color accents “kryptonite green”. Three diagonal bars, the symbol of Peugeot Sport Engineered, can be found on the bonnet, C-pillar and rear emblem. 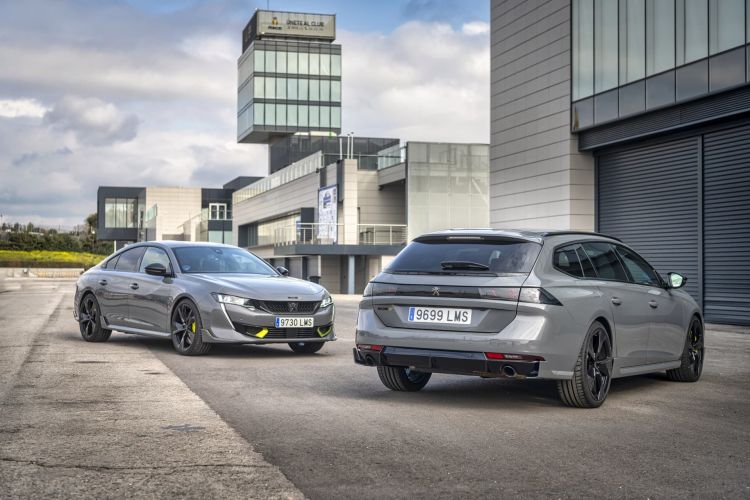 Its interior quality is excellent, as good as you would expect at the top of the Peugeot range.

The “green kryptonite” is also found in the aerodynamic lips, in a more subtle way, and in the brake calipers, which we will talk about a little later. In the rear we have a black diffuser and two very real tailpipes. The black color joins both rear optics and is also present in the window frames or rear-view mirrors. The interior is perhaps the area where there are fewer changes: beyond the stitches or the graphics of the i-Cockpit instrumentation, it could well pass for that of a 508 GT Line.

Before testing it, the car has already knocked us out aesthetically. Only a Volvo V60 Polestar Engineered could hold his gaze, and it’s a really subjective appreciation.

360 hp hybrids for the most powerful production Peugeot ever 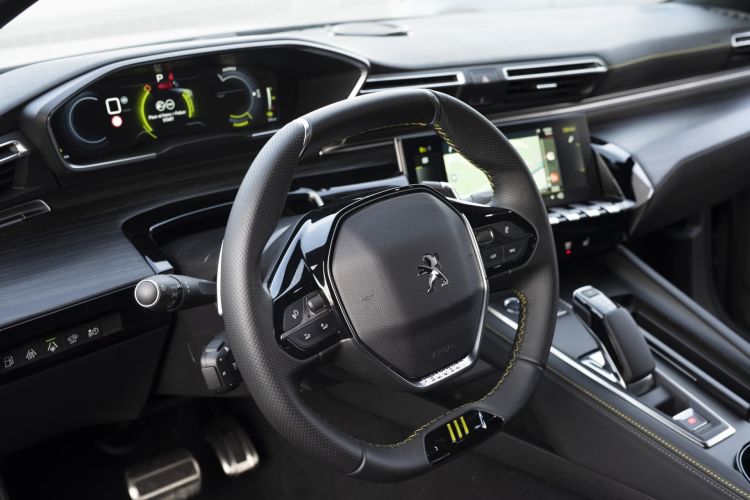 Altogether, this car develops 360 hp and 520 Nm of maximum torque. It has all-wheel drive and is capable of doing the 0 to 100 km / h in just 5.2 seconds, with a top speed of 250 km / h. The plug-in hybrid system battery has 11.8 kWh of gross capacity, and allows a modest electric range of 42 km. Although by the hair, this car has a ZERO label from the DGT and homologated emissions of 46 g / km of CO2. The on-board charger allows 7.4 kW of optional charging power, with 3.7 kW of charging power as standard.

In the other driving modes other than Sport, the car’s maximum power is limited to 330 hp.

At the running gear level, the Peugeot 508 PSE has a specific tuning, with adaptive suspension and a lower ground clearance – 10 mm on the front axle and 1 mm on the rear axle. In addition to its 245/35 ZR20 size tires, the track width increases by 24 mm at the front axle and 12 mm at the rear. The braking equipment has been reinforced, with Four-piston front calipers and 380mm ventilated discs. Necessary, since the saloon weighs 1,850 kilos when empty, and the family car marks 1,875 kilos on the scale. 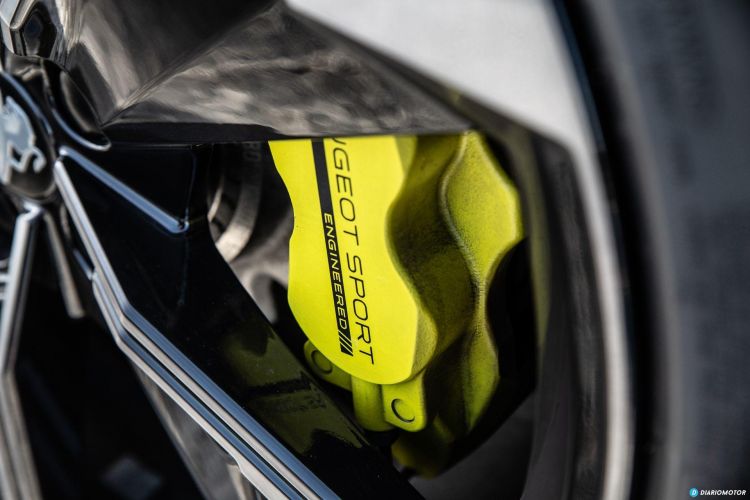 At the wheel: a recipe with room for improvement

What you really want to know is how is the car doing in sporty driving, so I will refer you to the tests that we already have of the Peugeot 508 to know how is their habitability, qualities or operation of the infotainment system. After an exit from the Jarama Circuit with the battery charged and the Hybrid mode activated, I arrive at the beginning of the section of curves and activate the Sport mode. Without hesitation, I sink the right pedal and with hardly any hesitation, the car shoots forward, combining the force of its three engines.

The heat engine sounds good, and it sounds good without resorting to tricks or false leaks.

The car picks up speed with astonishing ease, and soon I find myself playing with the limit of legality. The first thing that strikes me is the excellent steering feel and weight, which is much more communicative and precise than on other Peugeot 508s. The suspension tuning is excellent: I remember that the 225 hp 508 Hybrid was a relatively soft and not very agile car, unlike the PSE. Swinging is minimal and the weight of the car, close to two tons, is surprisingly well camouflaged. 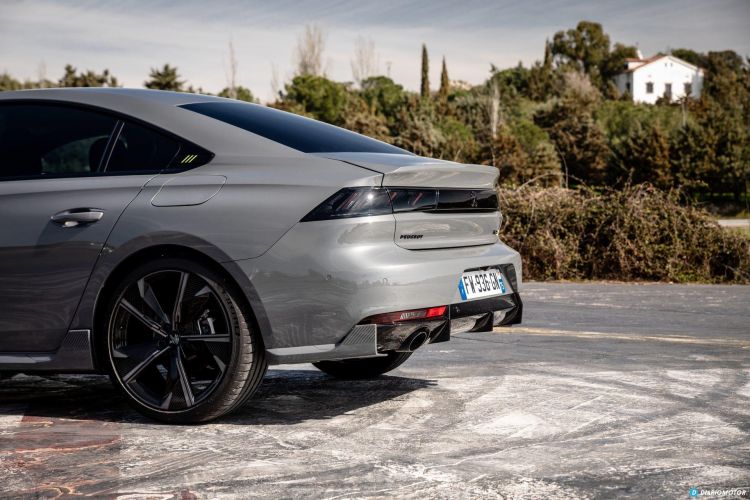 Of course, we are facing a car of almost 4.80 meters and a high weight. There are certain inertias, but they only manifest themselves in very tight curves, or at the limit. In a section of fast corners and good road surfaces, it is a brilliant car. In fact, in Sport mode, with the ESP slightly relaxed, the rear of the car helps us to round some corners. The feel of the Michelin Pilot Sport 4S, of course, helps this excellent cornering. Another point I want to highlight is the feel of the braking, which is usually unnatural and strange in many hybrids.

The entire test was carried out with a battery charge. We have not been able to check the behavior of the car with a discharged battery.

In sporty driving the bite of the brakes is incisive and again, very natural and dosable. The size of the brakes has prevented the dreaded fading or warm-up, at least on this touchdown. So far it might seem that the Peugeot 508 PSE is a dynamically perfect car … but I’m afraid it’s time to give one of lime and another of sand. My main complaint is due to e-EAT8 gearbox operation: It is quick to upshift, but not fast in downshifts. And when the reduction takes place, it is difficult to perceive. 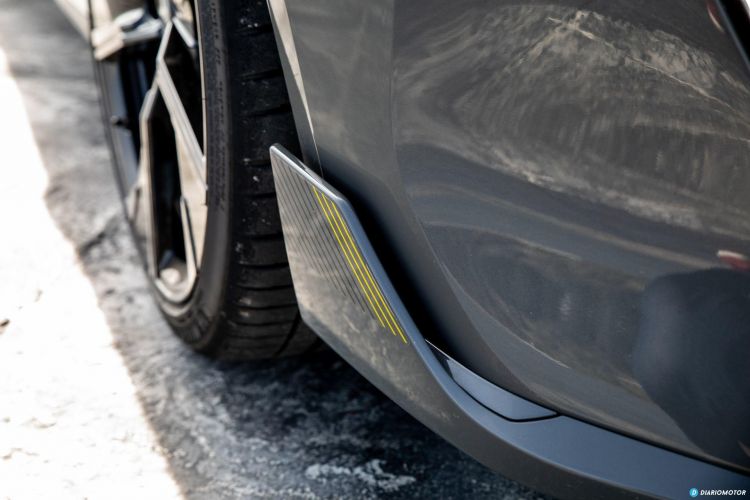 However, my main complaint is that there is no possibility to set a manual mode on this gearbox. We can change gears using the paddles behind the wheel, but after a few seconds with the same gear engaged, the car takes control and enters higher gears. This may mean that we enter quite a bit “sold” in that curve for which we were maintaining the second. The other problem is the dosage of the power delivery of its two electric motors, especially when driving on a stretch.

It is inexplicable that we cannot maintain manual control of change.

When they have to deliver their full power there is no complaint, but when we ask for a more modulated power, they deliver more or less power than we expect, creating a feeling of artificial driving. Another side effect of this is that if we release the throttle fully after full throttle, for a few moments we continue to have thrust from the electric motors, producing an unpleasant feeling of out of control for those few seconds. In short, driving “fine” on a mountain section is difficult. 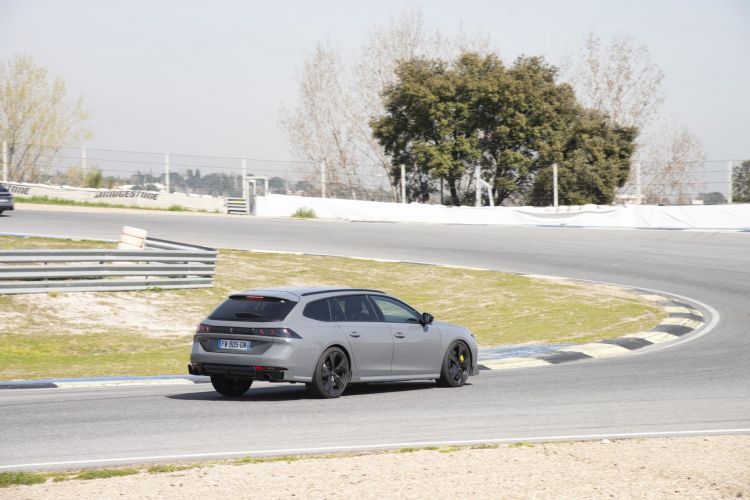 In this contact we were also able to drive the car for three laps in the Jarama Circuit. At a modest pace and with a 225 hp Peugeot 508 Hybrid as “hare”, we were able to certify the impressions taken on the mountain sections, and the good wickers with which Peugeot Sport has worked on its set-up. It is not a circuit car and the touchdown was not intended to explore its dynamic limits. For this we will resort to a thorough test in our favorite mountain sections in the north of the peninsula.

This same powertrain will be present in other Peugeot with the PSE surname, possibly in a 3008.

There is room for improvement on this 508 PSE, but still I have to confess that I expected to find a less polished product. As a first effort on the part of Peugeot Sport Engineered we have to give it a well-deserved “progress properly”. When Peugeot polishes the behavior of the gearbox and modifies the power delivery of the electric motors, it will be an almost round car. 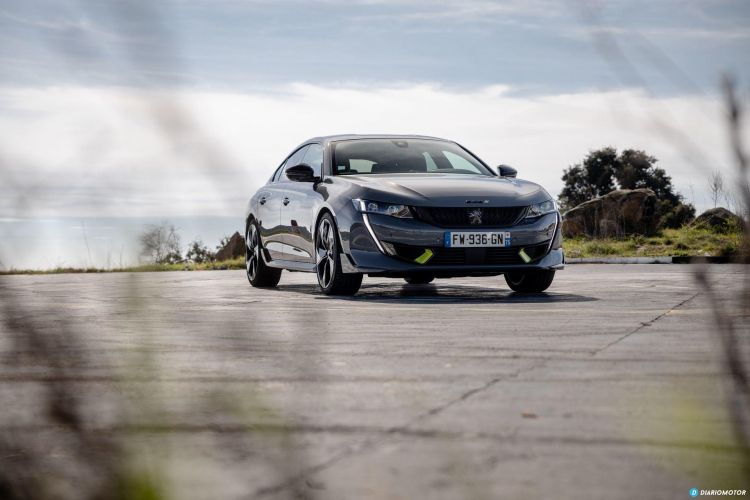 The Peugeot 508 PSE are already on sale in the Peugeot dealer network. They are not available at all dealerships: marketing starts at the 14 dealers designated as PSE Expert Center by the brand’s Spanish subsidiary. The price of the Peugeot 508 PSE is 64,200 euros for the five-door version, and grows to 65,400 euros in the SW family version. It is a high price, but it is a truly “full-equip” car, in addition to enjoying a level of performance worthy of premium alternatives.

Whether we like it or not, this is the sportsmanship that we have to live. The alternative is worse: not enjoying sports versions.

The brand considers its rivals to be cars with the surname AMG, M or RS. Although it is more powerful and faster than cars like the BMW 330e or the plug-in versions of the Mercedes C-Class or Volvo V60, it goes without saying that its orientation is not as visceral or purist as that of a BMW M3 or a Mercedes-AMG C 63. It is a car with room for improvement, but it is a very interesting car. One of its strengths is that arrives very soon to a segment in which there are hardly any alternatives – beyond the Volvo V60 Polestar Engineered, considerably more expensive and exclusive. 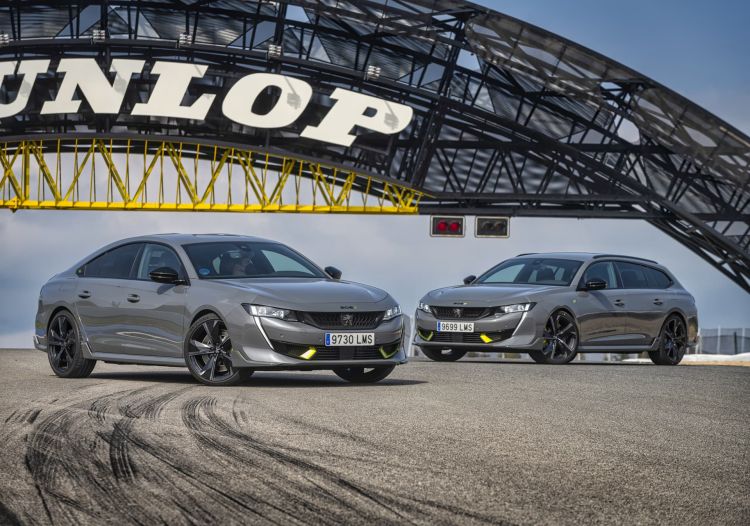 It is now time to see if the market is able to understand the Peugeot 508 PSE, a preview of what the sportiest Peugeot of this decade will be like.