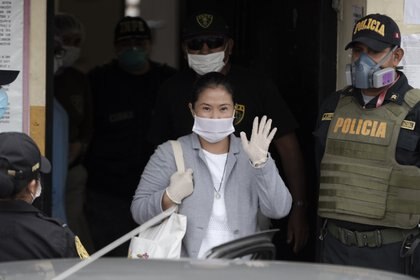 The prosecutor of the Lava Jato special team, José Domingo Pérez, has requested this Monday the suspension for two and a half years of Fuerza Popular, the formation led by Keiko Fujimori, considering that there is still the possibility that they may incur in a crime of irregular financing , so their presence in the next general elections in April 2021 would be in danger.

“The one who currently exercises, to this day, the representation and presidency of the party is Keiko Fujimori Higuchi, who was aware of the illegality of the money that entered that organization,” Pérez defended this Monday before a court specialized in organized crime in Lima to settle the case.

“The leadership remains in the party,” pointed out Pérez, who has asked the judicial authorities “how they are going to guarantee” the party president, “which is the one who received illicit money” and how they assure “that she is not going to to have procedural danger “.

Pérez has presented before Judge Víctor Zúñiga, the same magistrate who sent Fujimori to prison, various instances and judicial decisions in which both Fujimori and Fuerza Popular would be responsible for various tax crimes, including money laundering and concert to commit a crime.

Fujimori had been in prison from the end of 2018 until last May, accused of having received bribes from the Brazilian construction company Odebrecht to support his electoral campaigns in 2011 and 2016 in exchange for favors.

“There is a high probability that their legal representatives, the leadership, will repeat this same action or conduct of reusing this company to collect money from allegedly illicit origin,” said the prosecutor, who has warned that Fuerza Popular is committing new to this type of illegal financing due to your debts.

“If tomorrow, a representative of the Prosecutor’s Office comes and says that a political party receives money from drug trafficking and with that carries out activities and participates in democratic life, shouldn’t its activities be suspended? In the case of Fuerza Popular, it is accredited that he received money from corruption, “he assured.

THE “DEATH PENALTY OF THE PARTY”

During the hearing, on behalf of Fuerza Popular, the lawyer Christian Salas has criticized the request of the prosecutor Pérez, considering that it is based on “suspicions” and not on “real grounds”, and that this would also mean an attack no longer on the party leaders, but the rest of supporters, members and voters, who would be taken away their right to vote in the next elections.

“You cannot presume facts, what you must do is prove. Here we come to affirm and prove with sufficient evidence that there are none in this case,” Salas said, according to the Peruvian newspaper ‘El Comercio’.

For his part, Fujimori has stated to the press that in the event of this suspension, this would imply the “death penalty” of Fuerza Popular “because it would prevent the list of more than 170 candidates from participating” in the next elections, and with it it would lose “its legal personality”.

“Popular Force represents a political current that has had parliamentary participation and representation for more than 30 years,” said Fujimori, who feels endorsed by the law, since “no party can be suspended during an electoral process.”

“If they want to eliminate us, let it be through the popular vote,” Fujimori has settled.