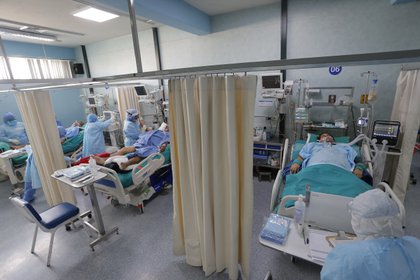 Upon finding out about another 6,480 recovered, 1,176,128 people were also discharged from a medical center or completed their home quarantine period. . / Luis Ángel González / Archive

Lima, Feb 20 . .- Peru reported another 3,306 cases and 187 deaths from covid-19 in the last 24 hours, which raised the total number of infected to 1,275,899 and to 44,877 deaths since the pandemic reached the country , in March of last year.
When other 6,480 recovered were reported, 1,176,128 people were also discharged from a medical center or completed their home quarantine period.
Thus, in Peru there are currently 54,894 active cases of the epidemic, 14,693 of which are hospitalized and 2,068 of these in intensive care units (ICU).
MINISTER SUPERVISES VACCINATION
This Saturday, the Minister of Health, Óscar Ugarte, visited the central Andean city of Huánuco to deliver a second batch of vaccines from the Chinese Sinopharm laboratory for health personnel in charge of caring for patients with covid-19.
Ugarte also started up a pharmacy and held a work meeting at the Hermilio Valdizán contingency hospital facilities, where he coordinated actions in the fight against the pandemic with local personnel.
The Ministry of Health (Minsa) said that medical personnel in Huánuco, some 420 kilometers from Lima, are being vaccinated in 343 health establishments throughout the region.
TWO MILLION VACCINES
While the vaccination of “front line” health personnel in the fight against the pandemic is progressing with a first batch of one million Sinopharm vaccines, the minister reported that another two million doses will arrive in the country at the beginning of March.
Ugarte indicated that this new batch is part of the contract that was signed with the Chinese laboratory for the purchase of a total of 38 million vaccines.
He added that in the next two weeks 250,000 doses of Pfizer would also arrive in the country and another 800,000 during March, as part of the contract deliveries for 20 million vaccines purchased from this laboratory.
AN IMPORTANT BREATH
Ugarte indicated that the arrival of these vaccines will give his country “a very important respite” and that, in addition, the international initiative Covax Facility would advance the shipment of between 600,000 and 700,000 Pfizer and AstraZeneca vaccines for March and April.
Peru began the vaccination process on February 9 with a first batch of 300,000 doses of Sinopharm, to which another batch of 700,000 doses was added on February 13.
The Minsa reported that until this Saturday the first dose of the Sinopharm vaccine had already been applied to more than 160,400 members of the health personnel, out of a total first goal of 396,258.