Today was the big day, AMD has launched the Radeon RX 6800 and Radeon RX 6800 XT, and we finally have between us the first independent performance tests of these two graphics cards in current games.

When the RDNA 2 architecture was announced, AMD emphasized performance of these new graphics cards in current games low rasterization, that is, it did not show information about its possible performance when working with ray tracing. However, the benchmarks they showed were very clear, according to the Sunnyvale company the Radeon RX 6800 was better than the RTX 3070, and the Radeon RX 6800 XT was better than the RTX 3080.

The results and information AMD gave were very positive, and I was deeply delighted as we needed competition at all levels for the prices of graphics cards to normalize in a similar way to what happened in the CPU sector after the launch of the Zen 2 architecture, but the fact that they did not specify figures in the results of NVIDIA and that they decided to omit data from performance in ray tracing got me thinking wrong.

Performance tests published by specialized media such as GamerNexus, HardwareUnboxed, Kitguru and TechPowerUp! show somewhat disparate results if we limit ourselves to absolute performance, but most agree on a number of key points that will help us better understand the real value behind the Radeon RX 6800 and Radeon RX 6800.

Each medium has achieved different results, and that is why I invite you to see for yourself the analyzes in detail, but as I said at the beginning, there are contact points in all of them which are very important. AMD claimed that the Radeon RX 6800 XT was superior to the RTX 3080, but it is not.

In some titles, the Radeon RX 6800 XT even surpasses the RTX 3090, but taking a performance average the conclusion is simple: the new graphics card from AMD it is a bit slower than the RTX 3080 in 4K (about 6%). In 1080p and 1440p there is no agreement, since some media give the first one as the winner, and others the second. Keep in mind that we are talking about raster results, that is, without including ray tracing or DLSS 2.0 in the equation.

For its part, Radeon RX 6800 outperforms RTX 3070 in 4K by 7% to 9% margin, according to most of the analyzes I reviewed. In this case, the result does fit with what AMD said at the time, although the difference is less than what the graphs that the Sunnyvale company showed suggested. Again note that we have not included either ray tracing or DLSS in the tests.

In terms of consumptions and temperatures, AMD solutions are a little more efficient, but they move in temperature values ​​similar to those registered in the RTX 3070 and RTX 3080. Thus, the Radeon RX 6800 registers highs 69 to 71 degrees, while the Radeon RX 6800 XT is round between 77 and 81 degrees. There is no agreement between the different media, but it is understandable, since the test environment and the ambient temperature have not been the same.

Ray Tracing and DLSS 2.0: The Value of Specialization 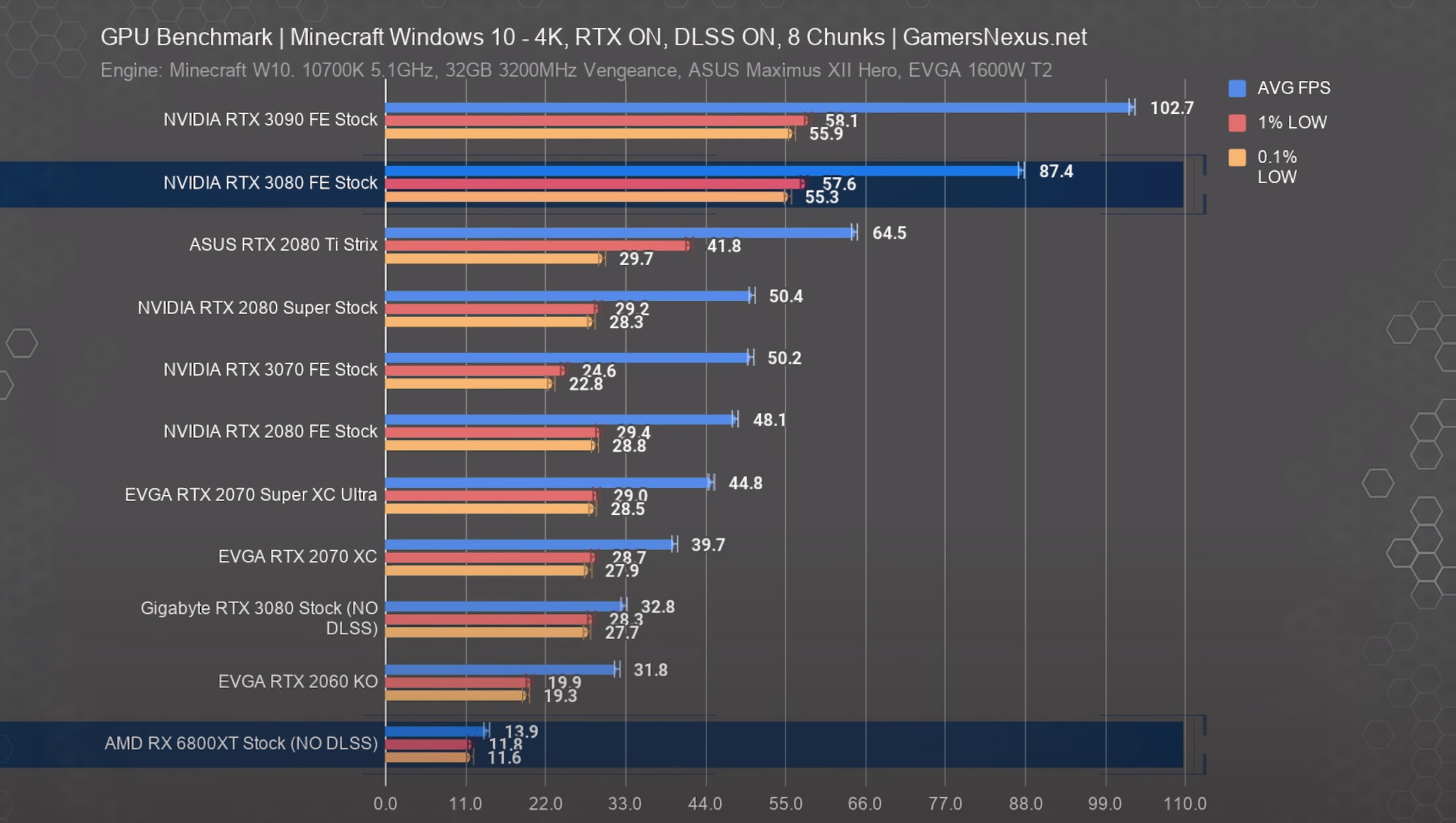 When we go to see the performance results in ray tracing we see that the Radeon RX 6800 and 6800 XT crash, so much so that the frame rate per second drops to a third in some cases, and the superiority of the NVIDIA Ampere architecture becomes apparent.

These results confirm what I told you at the time in this article, and that is the ray tracing performance of the Radeon RX 6000 would be, at best, on the level of the RTX 20 or a little above. NVIDIA has the upper hand in ray tracing, that’s beyond dispute, but what if we put DLSS 2.0 into the equation? Well, take a look at the GamerNexus graphics and judge for yourself. You can enlarge the images by clicking on them.

AMD has done a good job with the Radeon RX 6800 and RX 6800 XT. They are powerful, have good energy efficiency, register great consumption values ​​in relation to performance per watt consumed, and thanks to their 16 GB of graphics memory they are emerging as an interesting option in the long term, but they do not reach the level that Ampere architecture has on two fronts that have proven to have enormous potential: DLSS 2.0 and ray tracing. 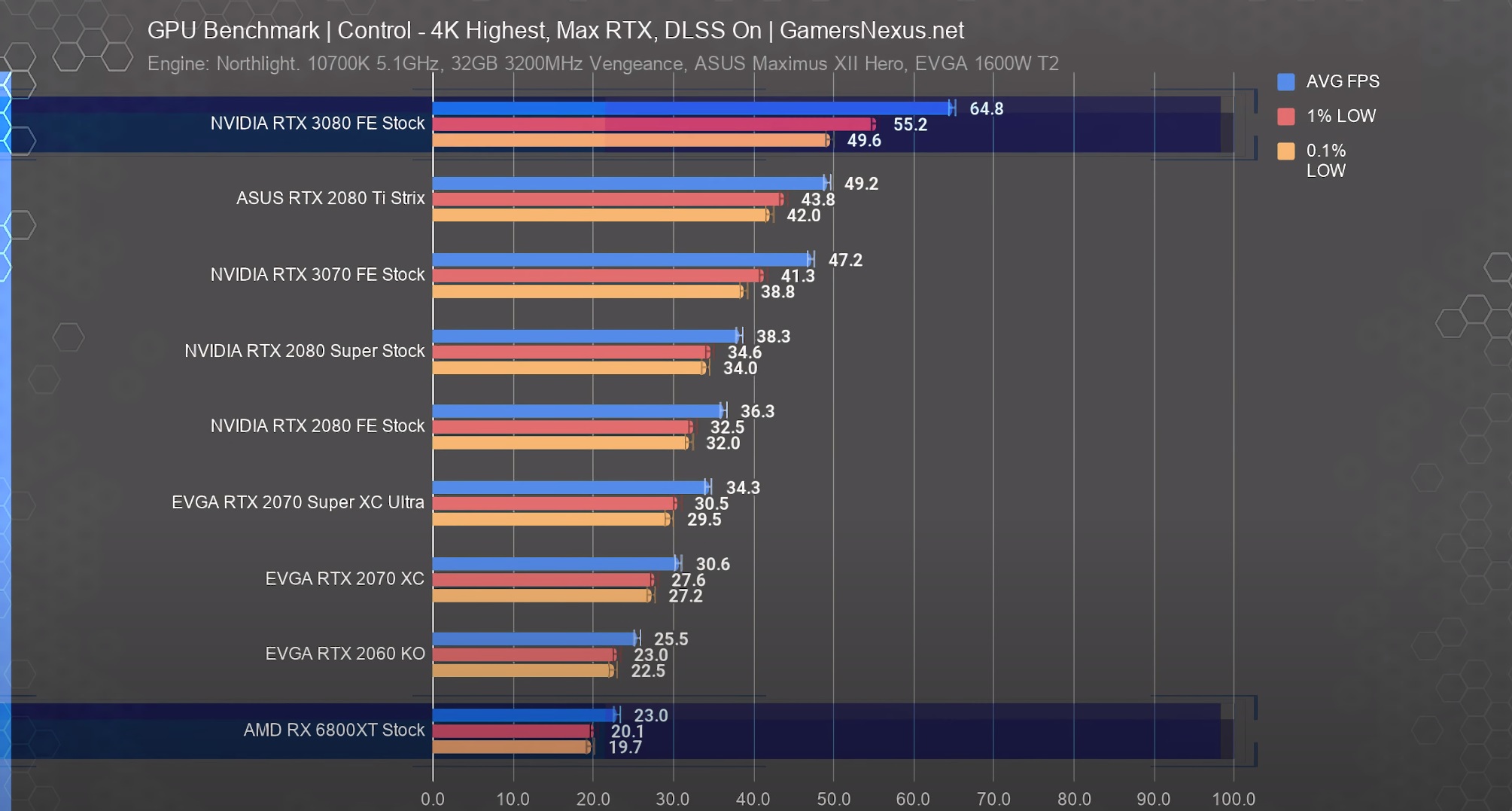 I know that more than one will tell me that ray tracing does not matter, that DLSS 2.0 does not care, and that there are hardly any games that take advantage of these technologies. I ask those same users, If AMD had the advantage with both technologies, would you also care? Let’s face it, the DLSS 2.0 is a marvel that doubles the performance without loss of visual quality, and that even improves the finish compared to the native resolution in certain titles (Control and Death Stranding, for example). It is so interesting that it makes an RTX 2060 able to move games in 4K with maximum quality at 60 FPS totally stable, so no you shouldn’t care.

On the other hand we have ray tracing, a technology that has a great impact on performance, it is true, but well used. can greatly improve the graphics quality in games, and that it has stopped being the future of these to become the present.

My conclusion is very clear, AMD has done a good job with the Radeon RX 6800 and 6800 XT, but we must be fair and acknowledge that NVIDIA has a more advanced architecture, and that remains a level above, a reality that will not change until AMD presents a real and effective alternative to DLSS 2.0 technology.

Taking a joint assessment, I think the Radeon RX 6800 and Radeon RX 6800 XT are at a good level in terms of gross power, and may be a good option if the sale price turns out to be reasonable, something that, for now, I prefer not value, since as expected the stock is conspicuous by its absence. Availability is nil, and the prices i’ve seen are so inflated than Radeon RX 6800 XT around 800 euros. However, and making a joint assessment, I still think that the RTX 30 are a more interesting option because of the difference that makes the ray tracing and, above all, the DLSS 2.0 technology.