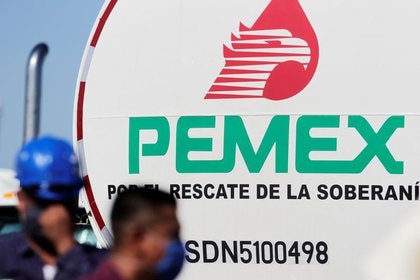 In financial markets flooded with so much cash that speculative-grade bonds can have a yield less than 2%, the state-owned Petróleos Mexicanos is an atypical case.

At 5.4%, the yield on the company’s benchmark bonds is not only well above that of similarly rated debts, but it is also nearly four percentage points higher than the rate that investors demand to buy Mexican government bonds. . This gap, known as the sovereign to quasi-sovereign spread, is the highest of its kind in the world, and the message it conveys is clear: Pemex’s financial problems are so serious that investors have serious doubts about whether the government will bail out the company when necessary.

But is this a rational fear? 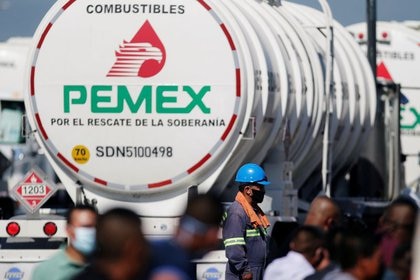 Pemex’s financial problems are so serious that investors have serious doubts about whether the government will bail out the company when necessary. (Photo: .)

For some very experienced financiers, it is not a rational fear. Pemex yields, they say, should be much lower. As bad as the company’s finances are today — and they are almost certainly worse than ever — creditors have something on their side: history. Not once in the last 50 years has a financially healthy government like Mexico allowed a state company at the level of Pemex defaults on its bondsaccording to Lee Buchheit, who has participated in nearly every major sovereign debt restructuring conducted during that time as an attorney at Cleary Gottlieb Steen & Hamilton.

“For companies like Pemex, which are so important to a country’s economy,” says Buchheit, “everyone knows that they really can’t be allowed to fail.”

Especially under the leadership of a president like Andrés Manuel López Obrador, a populist leader who was born in the heart of the Mexican oil region and whose main objective of his economic doctrine has been return Pemex to its former glory. For AllianceBernstein, Pacific Investment Management Co. and Emso Asset Management, AMLO’s obsession with Pemex was a key factor in their decision to take a counter bet on bonds.

“This particular government, and especially this president, has been a long-time supporter and advocate for the nationalization of the oil and gas industry in Mexico,” said Pramol Dhawan, who leads emerging markets at Pimco, the second largest debt holder. of Pemex. “It is quite difficult for me to imagine a scenario in which the government, much to its regret, abandons Pemex.”

In an interview Wednesday night with Bloomberg News, Treasury Secretary Arturo Herrera emphatically reiterated the government’s commitment to Pemex, calling the company one of the most important assets in the country and promising to reveal a significant reduction in the company’s tax burden this year to help stabilize its finances. Pemex, Herrera indicated, is an asset that must be taken care of.

The government will inject between USD 1.3 billion and USD 1.5 billion into Pemex this year, and will offer fiscal relief of 75 billion pesos (USD 3.7 billion), according to .. 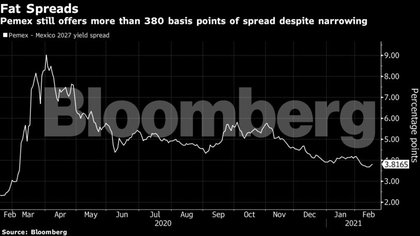 The Government will inject between USD 1.3 billion and USD 1.5 billion into Pemex this year (Photo: Bloomberg)

Under almost any measure, Pemex is worse than at any other time in its 82-year history. Its oil production has fallen sharply since the early years of this century. Its debt of $ 110.3 billion, by far the highest among its peers, continues to rise. It has also had the highest COVID-19 death toll of any company tracked by Bloomberg in the past year, and the numbers continue to climb as it struggles to maintain operations.

But investors relying on López Obrador’s unwavering support have made high gains on Pemex bonds in recent months, and six-year securities have returned 15% since the end of October, four times the average. emerging markets. And Pemex yields remain unusually high. The company’s spread over the sovereign is 382 basis points, more than 20 times the equivalent measure for Petróleo Brasileiro SA and five times the level for Ecopetrol SA, of Colombia.

The anniversary of the oil expropriation in Mexico in the 1930s is celebrated throughout the country on March 18. (Photo: .)

Pemex’s spreads are even more than 100 basis points higher than those of the symbol of quasi-sovereign risk: South African Eskom Holdings SOC Ltd., an unprofitable state company that it depends on government bailouts to pay off its debt. Its bonds yield approximately 200 basis points more than sovereign bonds.

In recent decades, there have been examples of SOEs defaulting in Dubai and Russia, but in those cases governments were also in trouble. Mexico, by contrast, enjoys investment grade credit ratings, even though Pemex’s finances are increasingly precarious.

A Pemex spokeswoman did not respond to a request for comment. Herrera said there is no risk of default.

The oil company’s debt burden is increasing as production approaches its lowest level in four decades. Volatile oil prices during the coronavirus pandemic have compounded its problems, forcing the company to cut back on investment. It is putting pressure on suppliers, to whom it owes billions of dollars. “He’s starting to play with fire,” said John Padilla, managing director of IPD Latin America. “This is a game of mercy. The only question is, when is the button pressed?

In all the years that Pemex has been on life support, successive Mexican governments have not disconnected it. This is due in part to the influence that Pemex and its more than 125,000 employees have over the country, where sovereignty over the oil industry is considered part of the nation’s heritage. The anniversary of Mexico’s oil expropriation in the 1930s is celebrated throughout the country on March 18.

López Obrador, 67, campaigned promising to revive Pemex, but it has been a challenge, with downgrades to a speculative degree by Fitch Ratings and Moody’s Investors Service Inc. The aid has been given mainly with provisional measures, such as 46.3 billion of pesos (USD 2.3 billion) in tax benefits in 2020 and a debt swap with the government in December that released 95.6 billion pesos to pay short-term liabilities. 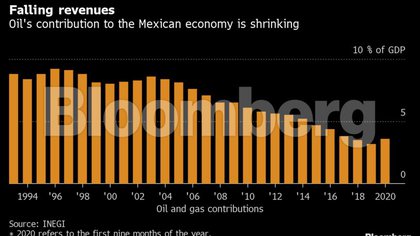 Despite all the concern about Pemex’s finances, the question for many investors is simply whether they can continue to count on the government’s support. (Photo: Bloomberg)

Despite all the concern about Pemex’s finances, the question for many investors is simply whether they can continue to count on government support.

At Emso Asset Management, a Pemex bondholder, Patrick Esteruelas, head of strategy, says that Mexico is aware that a default or restructuring would raise doubts about the administration’s willingness to pay its own debts.

“The Government of AMLO sees Pemex as a central pillar of its objective to achieve energy self-sufficiency,” he said. “We consider that the sovereign risk of Mexico and the risk of Pemex are effectively the same.”

“We must be fraternal”: AMLO warned that 10 countries monopolize 80% of the vaccines against COVID-19 “Break the pact and resign”: Salgado Macedonio’s victim confronted the Guerrero candidate “They are still mercenaries”: Epigmenio Ibarra launched against Loret de Mola after conflict with López Obrador