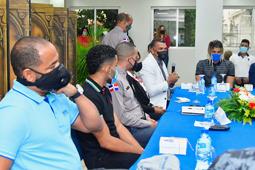 The law enforcement institution will implement said program through the institution’s preventive directorates and will have the cooperation of figures linked to sports, the director of the National Police reported.

Major General Edward Sánchez González made the announcement by leading an event with a large group of stellar Major League Baseball players who will join the National Police in this preventive and educational crusade.

It will be developed in all the communities of the country in coordination with players and athletes from other disciplines who are role models for the citizens, particularly children and young people. The program will be carried out mainly in the most remote and needy areas of the country and it contemplates the rehabilitation of infrastructures such as fields and baseball stadiums, which will be restored with the assistance of the Ministry of Sports. “We are going to work on strengthening civic-police relations with training activities for children and youth in the communities of origin of these athletes,” said the director of the National Police, who was accompanied by his wife Margarita de Sánchez and his son Edward