– Who is it: He was born in 1970, in the California of the film and television studios where his father worked. Obsessed with the seventh art since he was a child, he began shooting shorts in high school and continued to do so while leaving large institutions such as Emerson College or New York University to continue recording stories. After receiving praise at Sundance for his short film ‘Cigarettes and Coffee’ (1993) and launching into the feature film ‘Sidney’ (1996), he earned the nickname of a child prodigy when he premiered ‘Boogie Nights’ (1997) at twenty-seven. Since then he has become one of the essential North American talents of contemporary cinema.

– Style cues: He is capable of shooting immaculate modern classics without losing absolute authorial control. The neatness of its plans, wide and orderly, contrasts with the complexity of its protagonists, generally dark and self-destructive. The strength and classicism implicit in his photography has not changed when he himself has replaced his reference director, Robert Elswit, in ‘The invisible thread’.

– Famous quote: Asked the filmmaker about the meaning of the rain of frogs at the end of ‘Magnolia,’ he replied, “Oh, I hate it, when directors are supposed to explain their films. I’ll just say that if I had more money, I would have made cats and dogs rain ”.

– Phrase you can say in front of moviegoers: “Of the great pedantic conductors of today, such as Nolan, Aronofsky or Winding Refn, the one who really interests is Thomas Anderson.”

– Phrase that you cannot say in front of moviegoers: “I am more of Paul WS Anderson.”

FIVE FILMS YOU MUST SEE

– ‘Magnolia’ (1999): Through nine different stories that will inevitably converge into a single story, the filmmaker tells us about people desperate to tear down the facade they live behind and accept their true feelings. In addition to achieving what is probably the best interpretation of Tom Cruise, Anderson has expressed on more than one occasion his satisfaction with the work achieved: “I think that ‘Magnolia’ is, for better or for worse, the best film I have done” .

– ‘Wells of ambition’ (2007): Drawing on the 1927 novel ‘Oil!’ By Upton Sinclair, the director achieved the perfect example of a contemporary classic. Tough, forceful and marked by the impeccable photography of Robert Elswit, the double performance of Paul Dano and the brilliant transformation of Daniel Day-Lewis into a miserable miser of the early twentieth century, the film tells us about the dangers of mixing religion, greed and family.

– ‘The Master’ (2012): The most elusive version with the director’s audience. To talk about the Church of Scientology, he plunges us into a labyrinthine tale of alcoholism and the search for being in which Joaquin Phoenix and Philip Seymour Hoffman attract and collide over and over again, delighting us in wonderful accidents.

– ‘The invisible thread’ (2017): The director takes us together with the most respected designer from 1950s London to show us, once again, how difficult human relationships are. “We are all children of Kubrick, right? Is there anything you can do that he hasn’t done? ”Anderson said years ago, before filming for the second (or third time) a new version of what was narrated in ‘Eyes Wide Shut’.

– ‘Intoxicated with love’ (2002): When a guy as intense as Anderson set out to make a romantic comedy, what he accomplished was this dark tragedy about a guy unable to function properly with people of the opposite sex. Present on every Adam Sandler list of titles that do deserve our applause, he won the Best Director award at Cannes.

– ‘Pure vice’ (2014): Adapting well to Thomas Pynchon is impossible, and Anderson knew it better than we did. For that alone, and because he somehow accomplished the feat, ‘Pure Vice’ will always deserve more attention than it did. 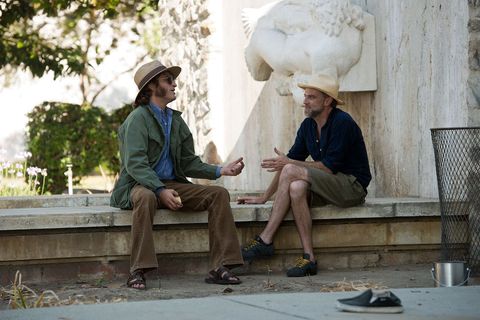