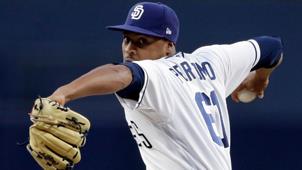 The Padres added a trio of prospects to their roster of 40 on Friday, protecting them from being drawn in next month’s Rule 5 draft.

Venezuelan infielder Tucupita Marcado and rights Mason Thompson and Reggie Lawson entered the roster, while pitcher Luis Perdomo, who underwent Tommy John surgery last month, was designated for assignment to make space. In five years with the Padres, Perdomo posted a 5.19 ERA, constantly showing glimpses that he could become a weapon as a long reliever but could never hold out.

Two promising Marlins Dominican prospects, shortstop Jo Sé Devers and patrolman Jerar Encarnacion, were included on the roster of 40 on Friday to protect them from the Dec. 10 Rule 5 draft.

Devers, 20, is the Marlins’ 13th-best prospect, according to MLB Pipeline, and was acquired in 2017 in the trade that brought Giancarlo Stanton to the Yankees.

In 2019, Devers was in three tiers, including Jupiter Advanced A-Class, and averaged .322 with an OPS of .781. He only played 47 games that year, after a forearm injury sidelined him for nearly three months.