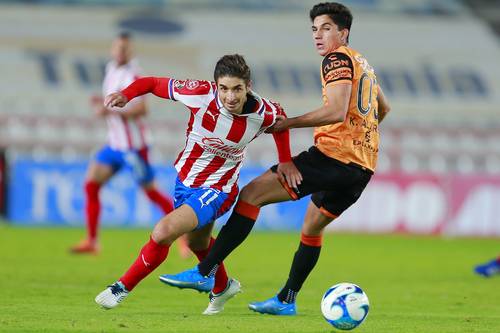 ▲ Chivas took the lead, but miraculously did not lose.Photo Jam Media

Pachuca missed a penalty in the final minutes and had to settle for a 1-1 draw against Chivas, thus wasting the chance to get his first win in the 2021 Guardianes tournament.

With the equalized, the Tuzos remained in the last place of the general table (18), with only three units, while Guadalajara, who tied his third game without knowing the defeat, added seven points and was placed in 13th place.

The people from Guadalajara took the lead at minute 27, when Jesús Molina jumped from a corner kick to connect the ball with a header and drive it into the back of the net.

However, at 48, Pachuca got the 1-1, after Gustavo Cabral took advantage of the fact that the ball was left alive in the area after a corner kick to fit it into the opponent’s goal.

At 89, the Tuzos had an unbeatable opportunity to win, when a penalty was scored in their favor for a hand from Hiram Mier.

Roberto de la Rosa made the charge, but his shot was blocked by the Chivas goalkeeper, Raúl Gudiño, so both teams had to distribute units.

America was sanctioned by the Disciplinary

The Disciplinary Commission determined yesterday that América did incur in improper alignment of its player Federico Viñas, for which he was sanctioned with the loss of the match played against Atlas, consequently, the result is modified and it remains 3-0 in favor of the Foxes