The second vice president of the Government, Pablo Iglesias, has taken time to record his talk show in the middle of the second wave of the coronavirus pandemic and when deaths in residences of elders, where he is competent authority, they have not ceased. The also leader of Podemos has issued this Sunday a meeting with the journalist and writer Olga Rodriguez and ensures that “this interview was recorded complying with all security standards against Covid-19.”

Despite managing a ministry with several key open fronts During the pandemic, Pablo Iglesias reserved a good part of a day for his occupations at the head of this program. In the program, the leader of Podemos wears a mask, which confirms that it was recorded during the pandemic.

«I always start these interviews by asking about childhood, but now as we are in a dystopian world in which the pandemic has disrupted everything, the first words I want to ask you are a reflection of this strange 2020. How has this 2020 changed you? How does it condition what you do, what you say, what you are? ”Asks the vice president. After that observation, Iglesias does not mention the open health crisis in Spain.

The program has been published on the YouTube channel of Podemos, where after 24 hours published it has barely harvested 10,000 views. With his interviewee, Pablo Iglesias questions current journalism and shows his concerns about the situation in the United States States, Israel, Lebanon, Syria, Egypt, Hungary, Iraq or countries where there are wars. But nothing about Spain.

The second wave of coronavirus is hitting with special virulence nursing homes, a dramatic situation that calls into question the role of the vice president Pablo Iglesias, who was already late for the first shock of Covid-19 in these centers. Since March, more than 21,000 elderly have died in residences with symptoms of this disease. As reported Doctors without borders “The mortality of our elderly is rebounding strongly.” The NGO warns that “in the last week of October, 336 elderly died in residences, 50% of the total deceased (790) », based on official data from the Ministry of Health. 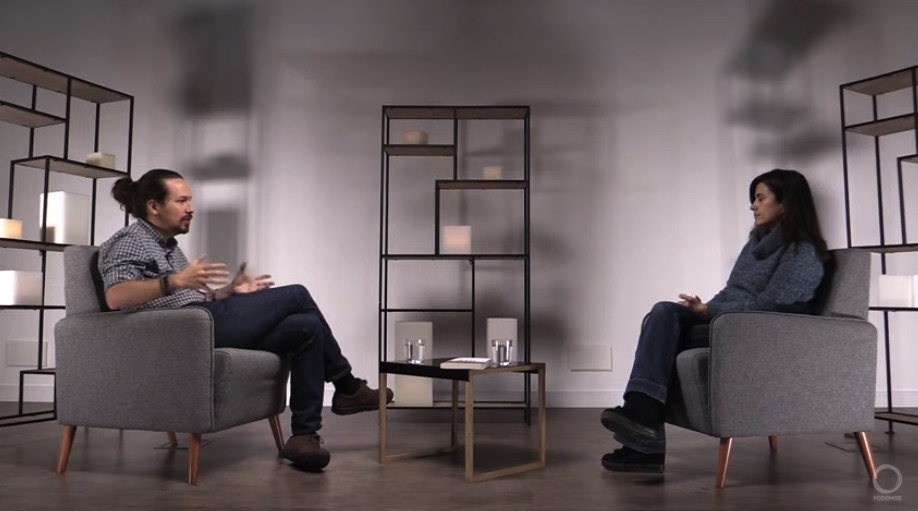 Doctors Without Borders denounces that October 30 there were 8,100 older people infected in residences (2,500 more than just 7 days before). “This represents an increase of 45% for only 7 days (not counting the cases of Madrid and Murcia, which only report the elderly who physically die in nursing homes)”, they highlight.

Without stepping on a residence

In this sense, one of the great criticisms he has received is that Pablo Iglesias has not yet visited any nursing home affected by the virus. Instead, the Minister of Defense, Margaret Robles, Yes, he recently traveled to the ‘El Almendro’ Municipal Center for the Elderly, in the Vicálvaro district (Madrid), to follow first-hand the disinfection work of the UME in the ‘Misión Baluarte’ operation.

This represents an increase of 45% for only 7 days (not counting the cases of Madrid and Murcia, which only report the elderly who physically die in nursing homes).

Since the start of this operation in September, the Armed Forces have completed a total of 326 disinfections, of which 281 in the Community of Madrid.

Although Pablo Iglesias emerged as the sole command in the residences, the work of the purple leader to solve the drama of the coronavirus in these centers has been blurred. In the seven months of the pandemic, the leader of Podemos has not sat down with the representatives of the nursing homes despite the fact that this group claimed to be able to see him.

In fact, the deputy of the Parliamentary Group of Vox Reyes Romero asked the Government in Congress about the reasons why the second vice president “has refused to meet with the employers’ association of nursing homes every time he has tried to contact him.” And the Executive’s reply indicated that Pablo Iglesias had delegated such contacts with the residences in the Imserso, a body dependent on his department, and with the Secretary of State for Social Rights, Ignacio Alvarez.

In the first wave, the nursing home employers tried to contact the vice president up to five times to convey their concerns. And all of them were ignored, according to the Business Circle for Attention to People (CEAPs), the state body of the most important agency in Spain in terms of places and representativeness.

Specifically, on January 27, February 3, March 20, March 24, 30 of the same and on May 5, the employer formally requested to meet with the Minister of Social Rights, but there was never a meeting with the vice president to reverse the deficiencies. In the second wave, Pablo Iglesias delves into this abandonment of functions while promoting on his talk show.