He was in the border of dead. After a boxing career that elevated her to the altars of women’s boxing and amassing a considerable fortune, when she began to kiss the canvas, the ins and outs of a marriage to an obsessive and controlling husband-trainer were discovered who provided her with the necessary drugs to that the descent into hell would cover the constant contempt he felt for her.

After a life in common with Christy, Jim Martin he was overcome by jealousy and wanted to end the life of the boxer. What Jim did not think of is that, crawling wounded to the street, she would ask for help and survive to tell it. Christy Martin was a pioneer paving the way for women’s boxing, cover of Sports Illustrated and survivor of domestic violence.

Christy Martin, with her coach and husband, Jim Martin, during the winning season in the ring. Photo: Lennox McLendon / AP

Put women’s boxing on the map

His story begins in 1989. At the age of 21, a teacher student, he had to pay for his studies and for 1,000 dollars he got into the ring as Christy Salters. When a promoter saw her compete on the “Toughwoman” circuit winning three consecutive titles, he sought out a coach for her. James martin, who got her sparring against her boys at a gym in Bristol board, Tennessee. He was impressed with its potential. In 1992 he proposed to her when she was 24 years old.

After 19 consecutive victories, in 1993, Christy won his first title, the world championship WBC superlight in view of Beverly szymansky in three rounds. In 1994 he debuted in Las Vegas winning by knockout in the first round. He defended the title six more times until, in 1996, he reached the pinnacle in the great televised fight against Deirdre gogarty where he reaffirmed his world title. His notoriety was on the rise. Cover of Sports Illustrated In 1996, he signed a contract with the fighting promoter Don king and went from earning $ 15,000 to having a fee of $ 150,000 per night. She became the first female boxer to be inducted into the ‘Nevada Boxing Hall of Fame’.

After two years without any defeat, in December 1998, he fell to Sumya anani. In the post-match interview, the 30-year-old boxer said she had enough. But the contract with Don king It ended in 2001 and Christy got into the ring eight more times. In 2003 he suffered his first knockout loss to Laila ali and by the end of 2006 she was feeling overwhelmed. He went into a depression because of his hidden sexuality for so long, the abusive pressure of Jim and the defeats received within the ring.

He found refuge in the cocaine that Jim provided. By 2008 I did not leave home. The nearly $ 4 million he had reaped by taking and hitting was gone.

His coming out of the closet came ‘online’. Through Facebook he contacted a former high school lover, Sherry lusk. This one got her out of the cocaine addiction and they started a love relationship. Christy initiated the divorce papers with Jim. On November 22, 2010, the two women met at a motel near Daytona beach and they kissed before entering the room. Jim Martin I was observing. The next morning, when I come home, Christy he heard someone sharpen a knife in the kitchen. He went to his room where he was getting ready to rest since he had a headache. Jim He entered the room and stabbed him three times in the chest and cut his leg. Then he shot her with his own pink pistol that he kept while she yelled “You can’t kill me!” 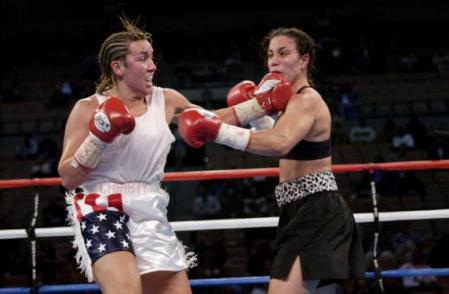 On November 17, 2001, Christy Martin faced Lisa Holewyne, who years later would be her partner and support in the gym she has set up. Christy won the match. Photo: John Gichigi / Allsport

Looking back, Christy She admits that she married for social convenience since in high school she had been intimate with boys and girls and was concerned that his interest in other girls could harm her career as a boxer in a fairly conservative family. Jim He convinced her that her family did not love her, that she would not find anyone who wanted to train her, and that he was the only person she could trust. The psychological and physical control that Jim applied to it grew as the years went by: “No one has knocked me down, except Jim” he said Christy when he changed his last name to Salters after divorce.

After the assassination attempt and almost left for dead, Jim Martin left her in the conjugal bedroom convinced that Christy he would give his last breath there. But as she had done many other times, she got up, went out into the street and managed to stop a car that took her to the hospital. Jim was sentenced to 25 years in prison. 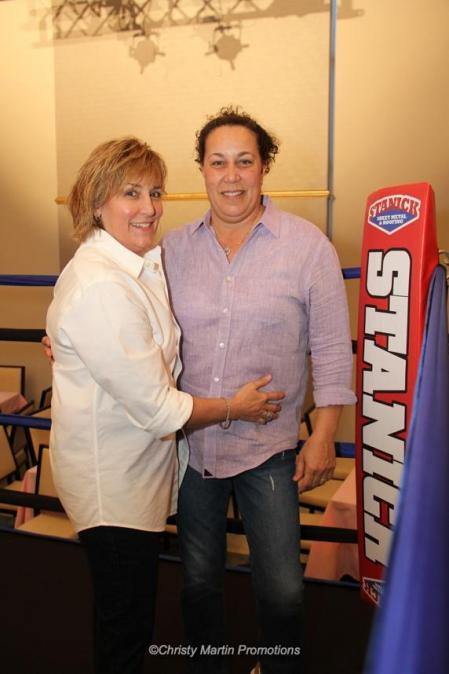 And he returned to the ring. After seven days in hospital she asked Michael Diaz, a coach who was in Las Vegas, to prepare him for new battles. “Boxing is the best therapy I can find,” he told her.

One hundred and ninety-three days after the shooting and stabbing and at age 43, Christy Salters She stepped into a ring dressed in pink to seek her 50th victory against Dakota stone. In the sixth round, although she did not want to, the doctor asked to end the fight: the X-rays showed nine fractures and after two hours in the operating room, Christy He could not speak as a blow to the head had affected the right part of his body. He refused to give up and still in 2012 fought against Mia st john who beat him in 10 rounds. Christy Salters he had to accept that his boxing career was over and that he was returning to the real world. For two years she was a substitute teacher at the institute Vance of Charlotte until, together with her new partner, the ex-boxer Lisa holewyne, has set up a gym where he trains and prepares boxers organizing evenings through ‘Pink Promotions’ where we find, among his pupils, Evan holyfield, son of Evander Holyfield, with pink gloves, those that marked the trajectory of a survivor. 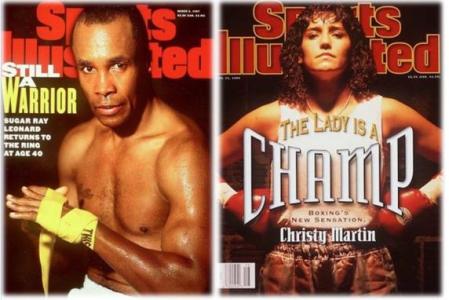 Christy Martin was the cover of the same sports magazine as was Sugar Ray Leonard, Sports Illustrated

Being the first in sport and in life has its physical or mental consequences and resilience becomes the best of allies. Christy She went up and hit rock bottom but began a path that opened the opportunity for so many women who were reflected in their fight, on the ring and in married life. In 2013 he spoke to senators on Capitol Hill in Washington, DC to support the ‘Protecting Domestic Violence and Stalking Victims Act’. Now she organizes boxing evenings in which her fighters wear pink gloves to raise funds for organizations in defense of battered women. Physically, the consequences of so many blows cause him a lack of physical resistance and double vision, but what hurts him the most are the blows received outside the ring.

Discover more stories of athletes who have broken the schemes of the world of sport, have gone against the tide or have overcome the obstacles that life had in store for them at www.historiasdeoutsiders.com