Since last Thursday, I have spent a lot of time putting together a complete and realistic Outriders performance test so I can share it with you. It wasn’t easy for me as this game unfortunately lacks a built-in benchmark, and has highly variable frame rates per secondIn fact, sometimes it is enough to look in the opposite direction to go from 120 FPS to 250 FPS.

And why an Outriders performance test? Well for three reasons. The first is that it is one of the most important launches of Square Enix, the second is that we are facing a very interesting triple A title, both for gameplay and for setting and technical section, and the third because it is a title based on the Unreal Engine 4 that adopts NVIDIA’s DLSS 2.0, a revolutionary technology that, recently, has been integrated as a plugin in the Unreal Marketplace. We have already told you, at the time, all that that implies in the face of the standardization of DLSS 2.0 in the short and medium term.

Analyzing the performance of Outriders with DLSS 2.0 technology gives us a glimpse what can we expect from such applied technology, in such a simple way, to games based on the Unreal Engine 4, and the truth is that the result is fantastic. Broadly speaking, I would dare to say that the implementation of DLSS 2.0 in Outriders is as good as the one we saw in Death Stranding.

Outriders with DLSS 2.0 in performance mode 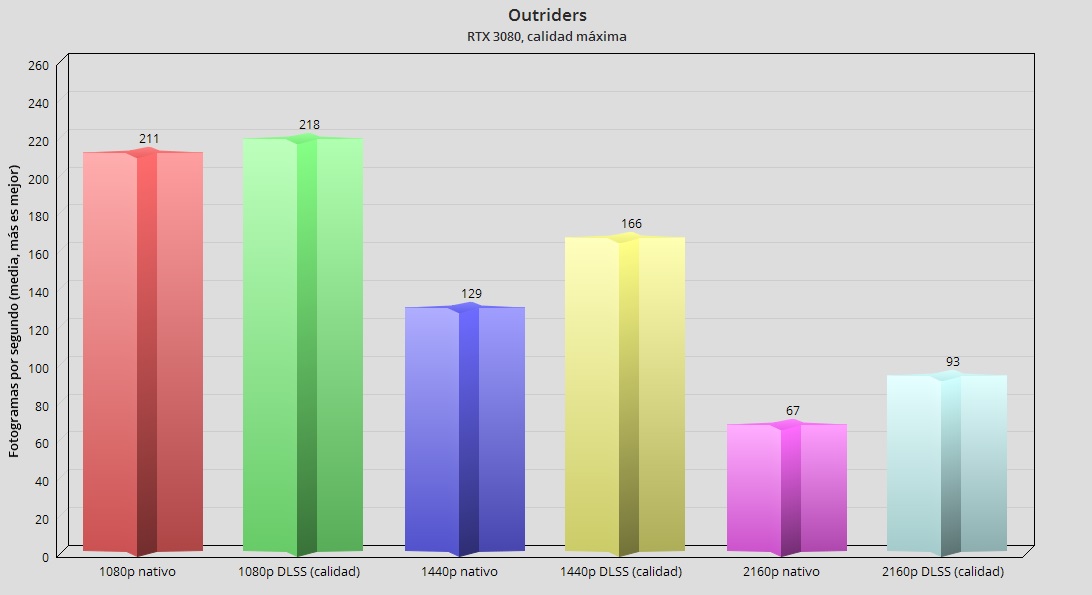 In the attached graph we can see the performance of Outriders in three different resolutions: 1,920 x 1,080 pixels, 2,560 x 1,440 pixels and 3,840 x 2,160 pixels. With the graphic quality set to the maximum, we see that the RTX 3080 has no problems to achieve stable averages of more than 60 FPS even in 4K resolution. You couldn’t expect less from a graphics card that remains, to this day, NVIDIA’s second most powerful in the general consumer market.

DLSS 2.0 has a very big impact on performance when we move above 1080p. This has an explanation, and that is that, as many of our readers will know, this technology uses an image reconstruction process based on a process of combining several images with a resolution lower than the native one. This combination is supported by an algorithm (artificial intelligence) to achieve the best possible result. 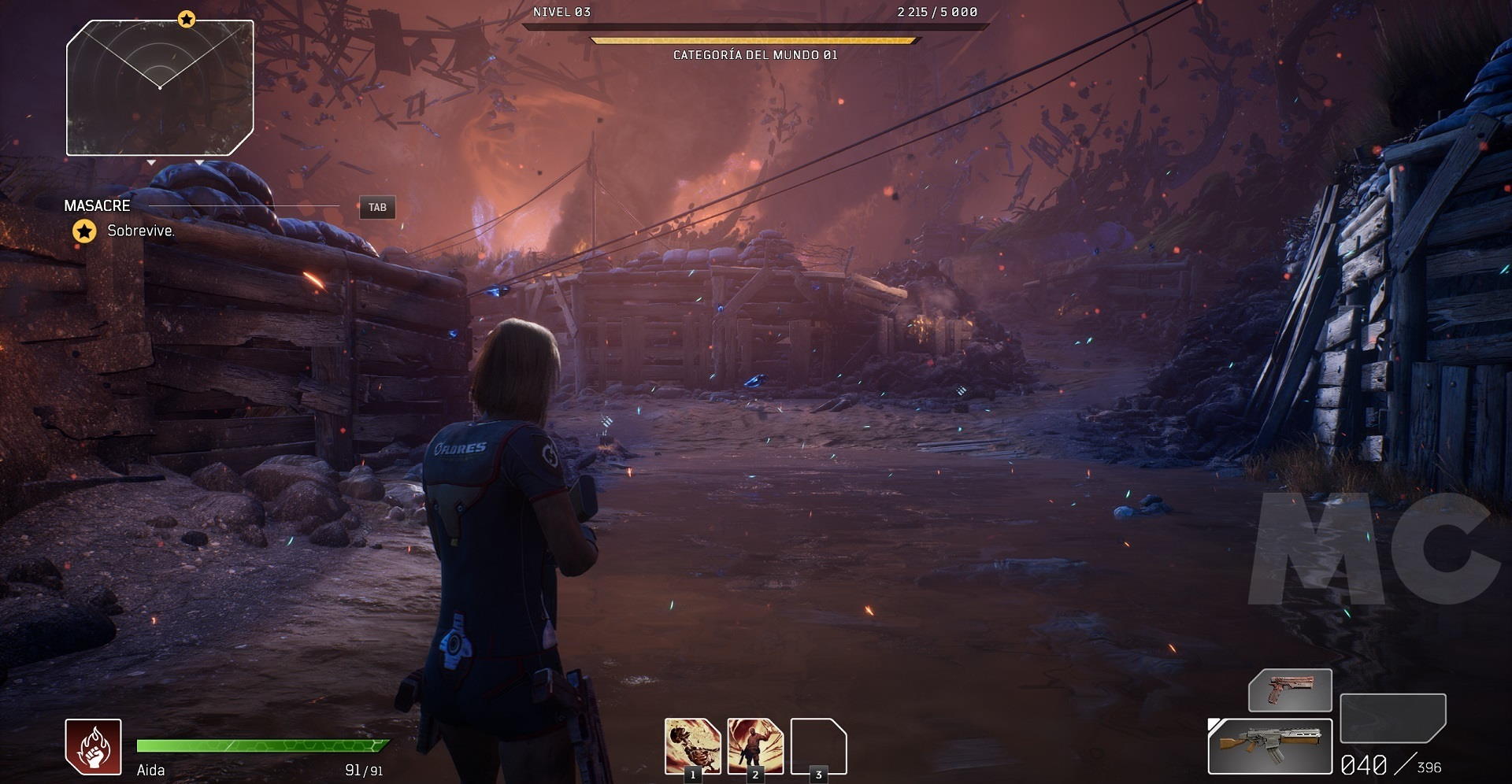 When we combine DLSS 2.0 with 1080p resolution, the base resolution we start from is very low, and the processor ends up being a big bottleneck. With DLSS 2.0 set to quality mode, 66% of the pixels are rendered, while in balanced and performance modes, 57% and 50% of the pixels are rendered, respectively. This means that, in performance mode, if we have the game set to 1080p, the DLSS 2.0 rebuilds the image starting from a 540p resolution.

The performance improvement of Outriders in 1440p and 2160p is enormous, as we can see in the attached graph, and the best thing is that there is no loss in image quality when we set the DLSS 2.0 to quality and balanced modes. Only from the performance mode do we begin to notice that this technology is no longer capable of maintaining a quality similar to what we would obtain with a native resolution. An achievement, without a doubt, that confirms what we have said on other occasions: DLSS 2.0 is one of the best things that has happened to the graphics sector on PC for many years. 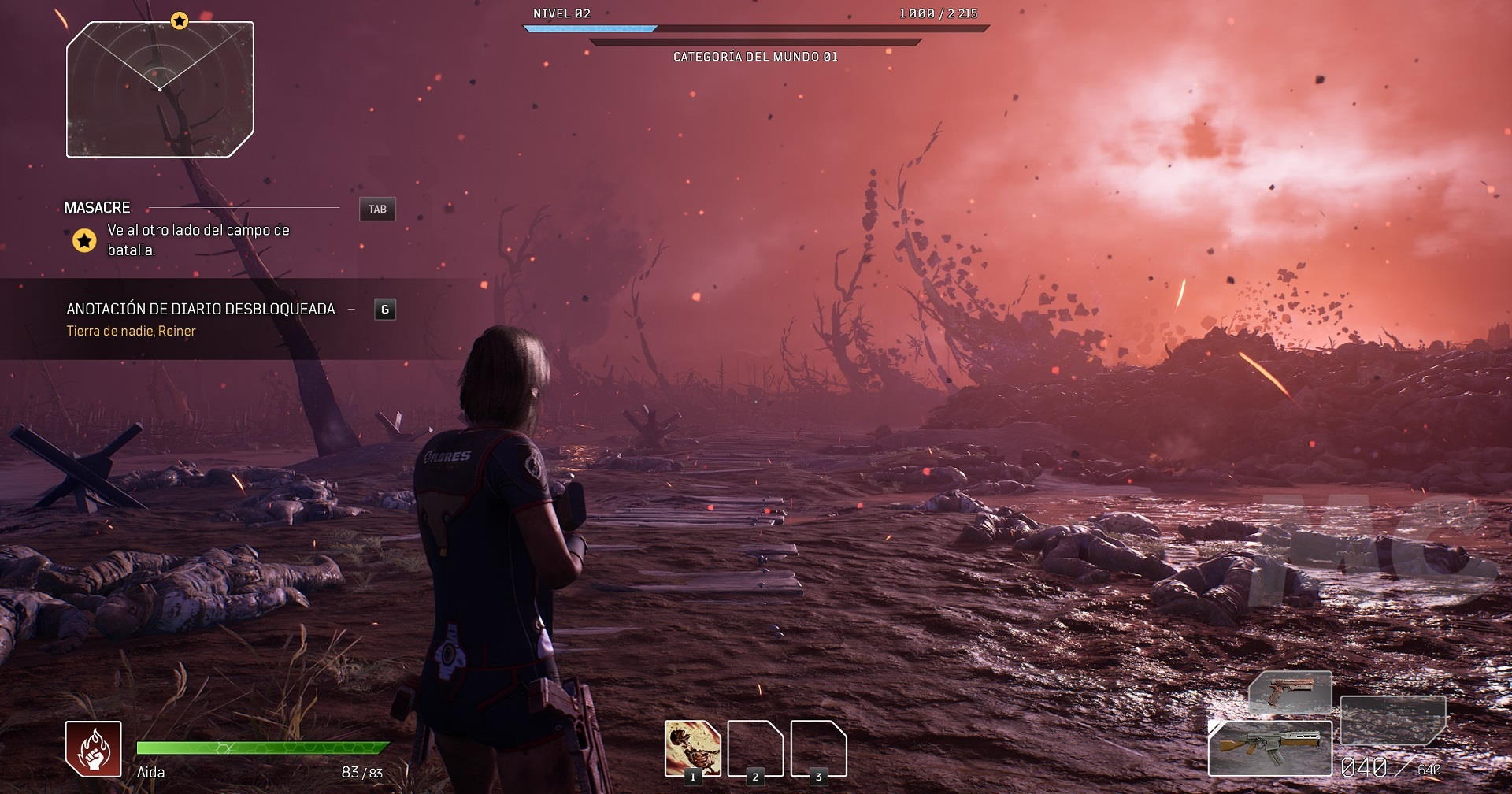 Before finishing I leave you a round of images so that you can compare what Outriders looks like with and without DLSS 2.0. Can you tell which images use DLSS 2.0 and which images don’t? I am convinced that the majority answer has been no, and it is perfectly normal since as we have said, this technology has been implemented so well that it practically maintains the same image quality that we would have using native resolution. I do not leave you with doubt, the first image of each type has DLSS 2 applied in quality mode, the second has it deactivated. 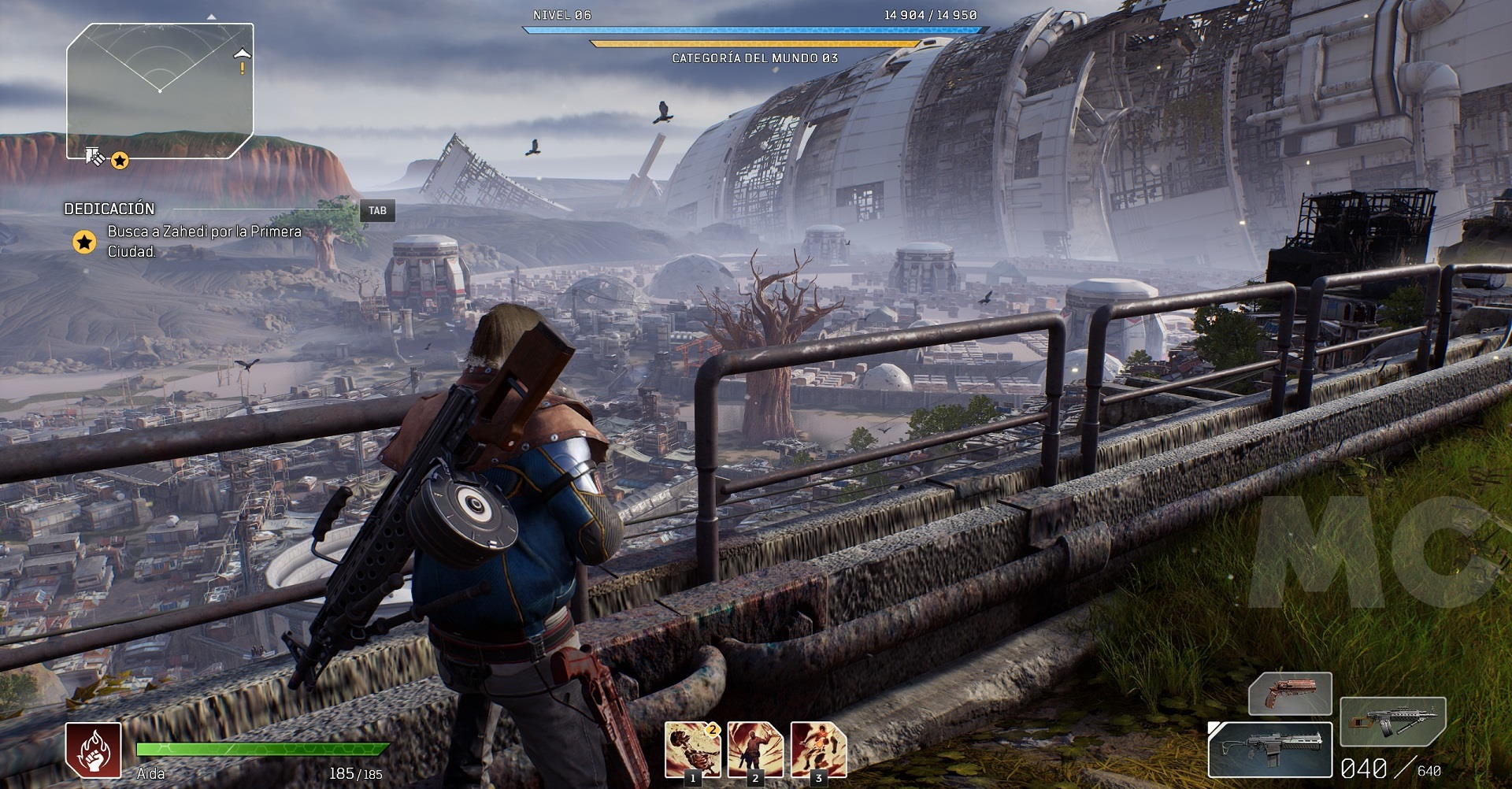 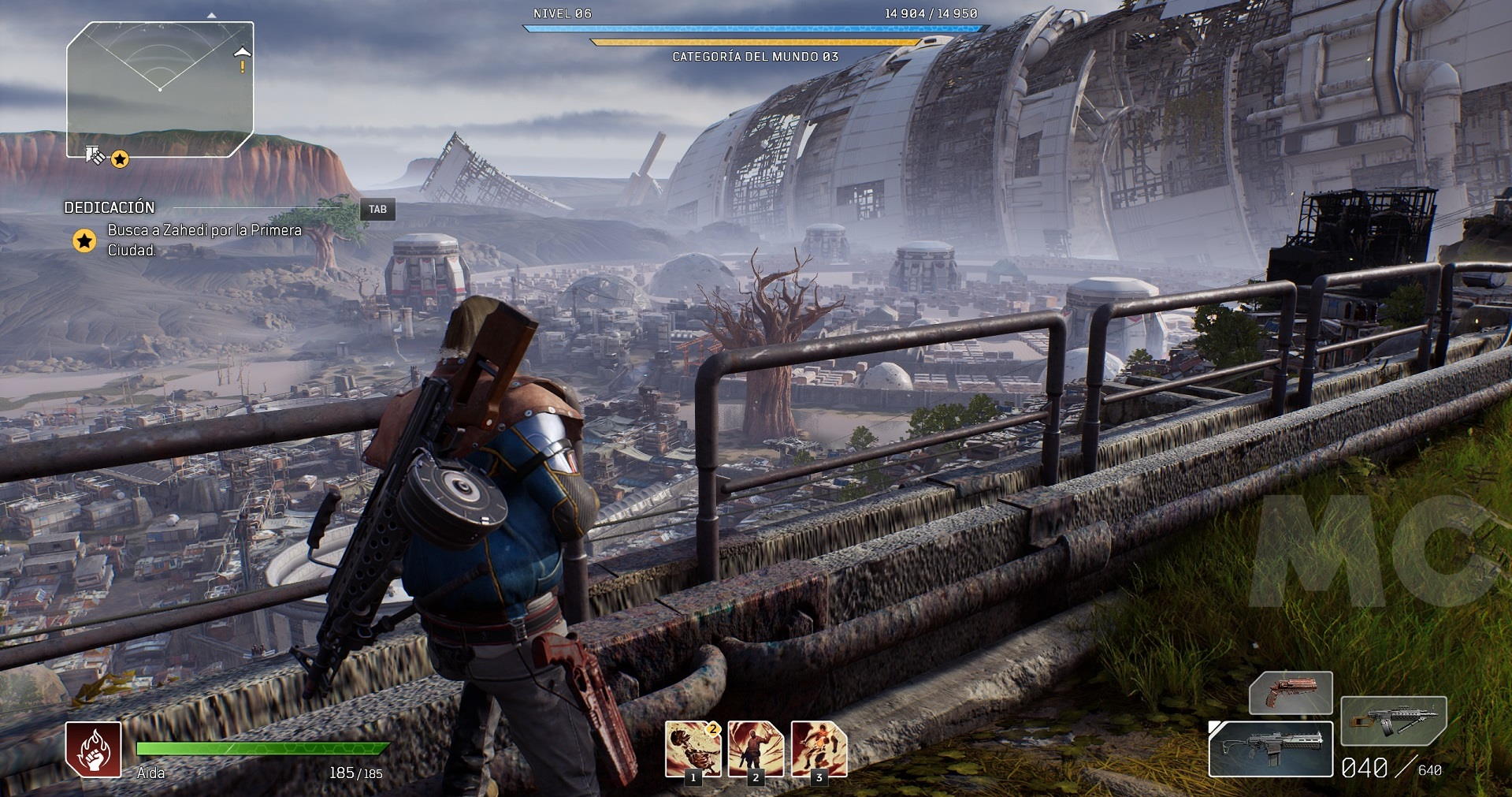 What do I need to play Outriders?

A few days ago we saw the minimum and recommended requirements of the game, and yes, the truth is that they were not badly raised. All in all, the performance of Outriders when activating DLSS 2.0 improves so much that we can play it without problems in 4K from an RTX 3060 Ti or equivalent (RTX 2080 Super, for example).

On the other hand, and based on the experience I have had during these days after several hours of play, I advise you install it on an SSD, since the game has quite a few loading screens, and with an HDD they become annoying. Those same loading screens typically last 2-4 seconds with an SSD, so yes, I’d dare say that such a drive is a ‘must have’ for enjoying Outriders.

Do not forget that in order to activate DLSS 2.0 it is necessary to have a RTX 2060 or better graphics card, since this technology uses the tensor cores that NVIDIA implemented, at the general consumption level, with the Turing architecture (Volta was the first to use these cores, but it only reached the professional market). If you have a GTX 16 series, such as a GTX 1650 or a GTX 1660, you will not be able to use the DLSS 2.0, since this series lacks tensioner cores.