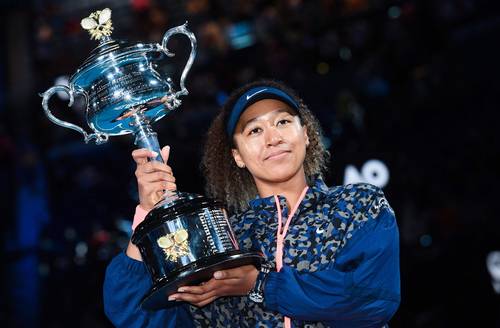 ▲ The Japanese won her fourth Grand Slam title and will rise to second place in the world rankings. Afp photo

Melbourne. Japan’s Naomi Osaka won her fourth Grand Slam title in as many finals contested, dominating 6-4 and 6-3 of Jennifer Brady of the United States in the Australian Open final.

On Monday, Osaka will move from third to second in the ranking, very close to Australian leader Ashleigh Barty, and is emerging as the leader in world tennis, in addition to standing out for her activism and her business work as the owner of a team of women’s soccer in the American league.

I’m very happy. For this moment I worked the entire preseason. It is very strange, when you get to the match ball, you start to tremble, confessed the champion, who celebrated the presence of the public, about seven thousand fans at Melbourne Park.

With a powerful serve that netted her six aces, the Japanese improved to 4-0 her record in Grand Slam finals. Osaka is the first woman to start her career in this way since Monica Seles 30 years ago.

For Osaka, this is also part of a 12-0 record in the quarterfinals and later stages of the major tournaments on the circuit.

She played really well when she had to, Brady acknowledged. He took good shots at the necessary moments.

The Japanese also has a 21-game winning streak that began last season and includes her triumphant run at last year’s US Open. In addition, he was crowned in New York in 2018 and in Melbourne in 2019.

Tonight was not going to happen, said Brady, 25, who was in his first final of a major tournament. I hope there are many more.

Osaka, a tall 23-year-old and 1.80-tall player, is originally from Japan, like her mother. His father was born in Haiti. At the age of three, he migrated with his family to the United States.

Only two other active tennis players have more Grand Slam titles than Osaka: Serena Williams, with 23, and her sister Venus, with seven.

The Asian player’s next task is to improve her performance on clay and grass, as she has never made it past the third round at Roland Garros or Wimbledon.

She is a great inspiration to all of us and what she is doing to spread the sport is incredible, said Brady, seeded 22nd in the tournament and 24th on the world list where she will rise to 15th place.

In Sunday’s men’s final, Serbian Novak Djokovic, world number one, will seek his ninth title in Australia and 18 in a Grand Slam. He will face Russian Daniil Medvedev, (fourth seeded), who plays his second final of a great and has 20 games without losing.