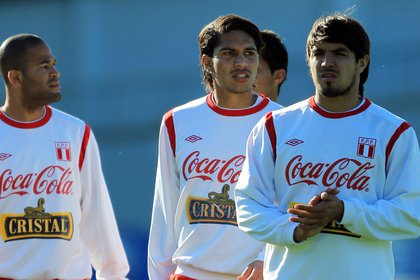 Lima, Feb 17 . .- The Brazilian international striker Paolo Guerrero received his medical discharge this Wednesday, six months after breaking his anterior cruciate ligament, and the Peruvian team is confident that he can regain physical form for the matches of World Cup qualifiers against Bolivia and Venezuela.
This was reported on Wednesday by the physical trainer of the Peruvian national team, Nestor Bonillo, who has followed the recovery of the forward almost daily under the care of the Porto Alegre city club’s medical team.
“I am very optimistic about Paolo Guerrero, more and more,” said Bonillo, asked about the program ‘The voices of football’, of the Peruvian station Radio Unión, before a possible call for the next matches of Peru in the South American qualifying qualifiers for the Qatar 2022 World Cup.
“Today they gave him the medical discharge. It means that his evolution is very good,” added the member of the coaching staff led by Argentine coach Ricardo Gareca.
The serious injury that Guerrero suffered on August 17, 2020 caused him to miss a large part of last season of the Brazilian League and also the first four days of the qualifying phase for the Qatar World Cup.
In those games Gareca had serious problems to line up a striker, as Jefferson Farfán had knee pain.
This led him to call for the first time the Italian-Peruvian Gianluca Lapadula, from Benevento, and for the next call the name of Santiago Ormeño, Mexican-Peruvian striker from Puebla, is gaining strength.
“We are following Ormeño, like all soccer players abroad. A detailed detail of his performance is made. He is within those observed like other boys,” Bonillo said.
With a view to the March 25 matches against Bolivia in La Paz and March 30 against Venezuela in Lima, Gareca has convened two days of training with a small group of players from the Peruvian league.
On that list are Eduardo Caballero (Deportivo Municipal), Erinson Ramírez (Deportivo Municipal), Carlos Cáceda (Melgar), Horacio Calcaterra (Sporting Cristal), Christopher Olivares (Sporting Cristal), Renato Solís (Sporting Cristal), Martín Távara (Sporting Cristal) ), José Carvallo (University), Jorge Murrugarra (University), Alex Valera (University) and Josué Estrada (UTC).
They will be joined as guests by several of the regular players of the Peruvian team who train at the Villa Deportiva Nacional (Videna) in Lima before the US MLS, as is the case of Alexander Callens (New York City) and Marcos López (San Jose Earthquakes).