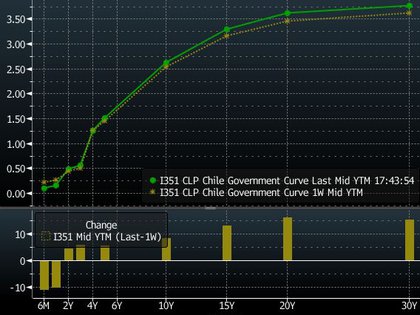 (Bloomberg) – Chile’s sovereign debt, the highest rated in Latin America, took a hit this week due to too much good news.

Optimism about the development of a vaccine, the gradual lifting of restrictions imposed to contain the coronavirus at the local level and Joe Biden’s victory in the US elections combined to generate a wave of demand for riskier assets. The safest instruments, such as Chilean sovereign debt, went in the opposite direction.

“Investors are selling assets considered more of a refuge, encouraged by the search for greater profitability in the badly punished local stocks,” said Jorge García, investment manager at Nevasa.

Pfizer reported positive results for the development of its COVID-19 vaccine and President Sebastián Piñera said he hopes to have the antidote in the first months of 2021, raising hopes of ending the pandemic. And as new cases increase in the United States and Europe, Chile has avoided a second wave, allowing the government to move forward with the lifting of restrictions. Some shopping malls were allowed to accept a higher flow of people last week, while casinos and gyms were also able to reopen in some areas of the country.

But not everything is good news for Chile. Some factors are specifically affecting the bond market.

A bill that would allow people to make a second early withdrawal of their pension savings could also add upward pressure on rates. If approved, private pension funds would sell up to US $ 4.8 billion in local fixed income instruments and rates on the longest part of the curve could rise 45 basis points, according to a report by BCI economists.

“Bank and corporate bonds in UF rated AAA and AA, and with short terms are an excellent investment alternative in the coming weeks,” said Gallardo.

The Senate could vote on the pension fund bill this week, after the Chamber of Deputies approved it last week by a large majority.

The Central Bank of Chile warned of the risks to financial markets in the scenario of a health crisis that was longer than expected and said that local corporate debt has increased 11 percentage points in one year, reaching 134% of GDP in September.

WOM has registered bonds indexed to the 10 and 30 year IPC for ~ US $ 380 million, while Global Soluciones Financieras is preparing to sell ~ US $ 114 million in bonds linked to the 10 year IPC. Enjoy also requested four new series of bonds in the context of its debt restructuring.

Lundin Makes Improved Offer to Striking Chile Copper Workers Codeco will extend one year open-pit operation in ChuquicamataBCI: . would sell USD4,800m in Chilean bonds with a second 10% Copper ‘hopefully’ it would remain above USD3 in 2021, says CochilcoBicecorp will be able to issue 1.5m UF in bonds from today IPC in Chile would maintain upward pressure in the short term: BanchileChilena Enjoy will register four bonds due to reorganization: ICRCentral de Chile criticizes recommendations to change funds .AVLA places 700,000 UF in 5-year bonds at 5.5% in Chile Debt companies Chile is 134% of GDP; grew 11% in one year: BCChCámara Baja Chile approves second . withdrawal; passes to the Senate (1) Chile firms would postpone Capex due to new constitution: FitchGlobal Financial Solutions registers 10-year bonds in Chile WOM registers two lines of bonds in Chile for 10 and 30 years Chile economists predict key rate will remain unchanged Chile anticipates vaccination against covid at the beginning from 2021Chile trade surplus USD $ 1,208m Oct .; its T. USD $ 1,272m

BONDS IN THE REGISTRATION OR ISSUE PROCESS: