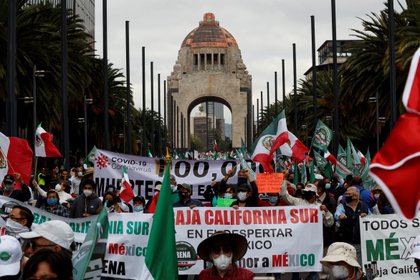 Mexico, Nov 21 . .- Hundreds of opponents of the president of Mexico, Andrés Manuel López Obrador, marched this Saturday on the central Reforma avenue, in the Mexican capital, to insist on the resignation of the president, whom they criticized and launched slogans.
The protagonists of the demonstration were once again the members of the National Anti-AMLO Front, initials of the president, self-styled Frenaaa, who left the Monument to the Revolution towards the Zócalo in Mexico City, although they changed their ending and went to the National Auditorium.
During the tour, the mobilization called “The great awakening of Mexico, this time we will be millions”, decided to make a stop at the Angel of Independence where they held a rally and criticized the management of the Mexican president and insisted that “it is tearing apart and dividing. “
“Get out López!”, “Go away López!”, “! Communist López!” and “López, I regret having voted for you!” were some of the slogans that the president’s detractors displayed on banners and banners.
The organization, openly opposed to the Mexican president, has as its main objective to demand the “resignation” of López Obrador and has tried to pressure the president with different demonstrations.
The first occurred aboard cars and sounding their horns, although the best known was the occupation of the capital’s Zócalo in a camp that began on September 23 and that they barely removed on November 18.
In that protest, the organization occupied the entire plateau of the Zócalo with some 500 tents, but local media pointed out that most were not occupied and that the protesters did not reach a hundred, something that the organizers themselves accepted.
The organization, accused of having the financial support of several businessmen, has manifested itself on numerous occasions in recent months and demands that López Obrador resign before the two years have elapsed since he began his mandate, on December 1, 2018 , and that will end on November 30, 2024, although his departure may occur in a revocation of the mandate to which he will submit in March 2022.
It was at the end of May when the first protest about vehicles occurred when hundreds of drivers advanced in a caravan and honked their car horns on the central Reforma avenue of the Mexican capital.