Everything arose on the occasion of the 50th anniversary of a sports car that was very successful in its time, not only from a commercial point of view but also due to its feats in the world of competition, especially in rallying. Such a special date could not go unnoticed; something had to be done to remember that car that gave Opel so much satisfaction: the Manta.

Then someone had the idea and the company management gave the green light to the project. Based on an old model, decided to replace the combustion engine with an electric one, with its corresponding battery, and add a few touches of modernity to the exterior and interior, but without altering the original base of the chassis or the bodywork.

In the warehouse of the Rsselsheim factory where dozens of historic cars, concept cars and competition vehicles of all categories are kept, there was a Opel Manta GT / E of the A series that its owner donated to the company at the end of the eighties. It was a unit bought in 1974 that had only traveled 55,000 kilometers and it was in pretty good shape. It seemed like the best solution to get down to business.

A project of only five months

No sooner said than done. A team of 90 people led by Peter Junghanns started working on the project and only five months later the Manta GSe ElektroMOD was ready. In reality, the intention was not more than an exercise in style, a product to be exhibited at different events and to show the creative capacity of the manufacturer to reinterpret the past. However, the impact has been such that many customers and dealers have been interested in the car, even asking about the possibility of joining a waiting list to receive one. 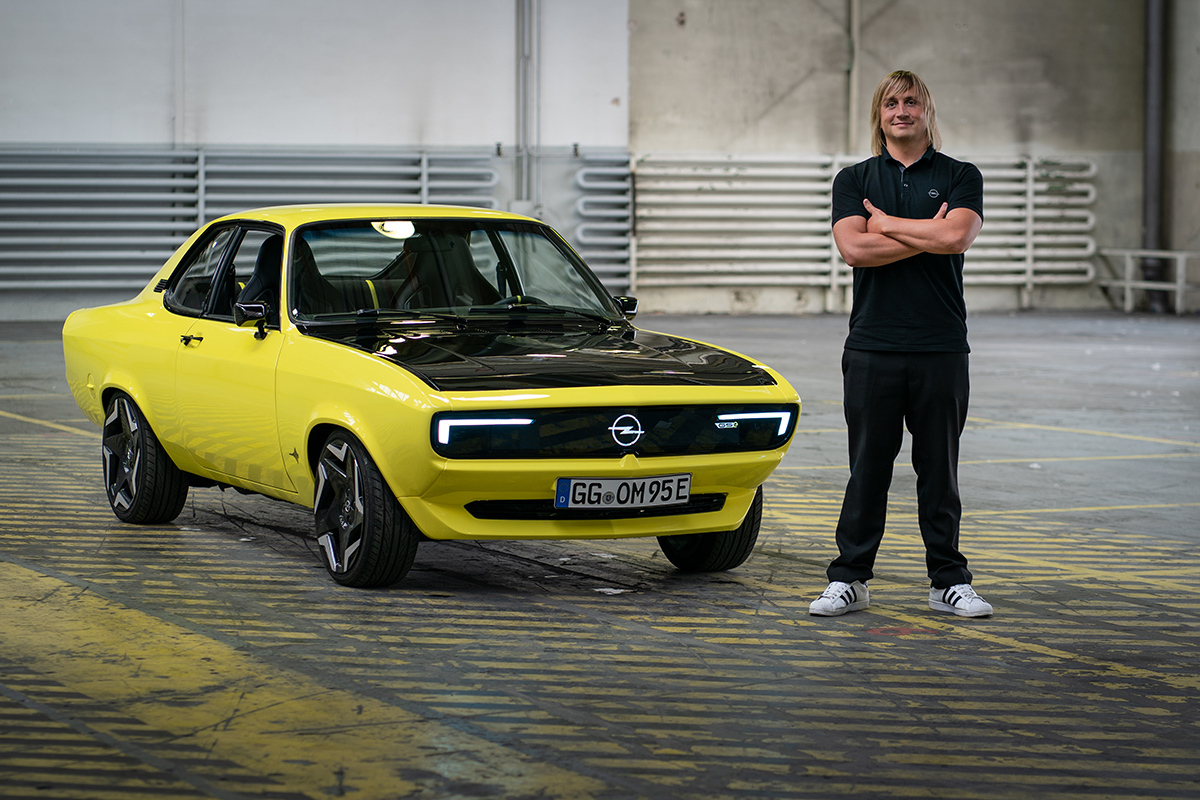 “The problem is that it is expensive to build,” says Junghanns. “A unit from that time, well preserved, can cost around 20,000 euros and the transformation will cost another 40,000 additional euros.” It is certainly an expensive whim, as it is still a fairly simple coup, but its retro appeal mixed with avant-garde details does not go unnoticed.

“Given the surprising number of requests and the expectation generated, we are studying different scenarios for the future, although this was not the initial objective”, explains the person in charge of the project. “The truth is that we wanted to do something different, as a tribute to the past and to show that Opel is now an electric brand; we did not have in mind that there would be a continuity, but …”. 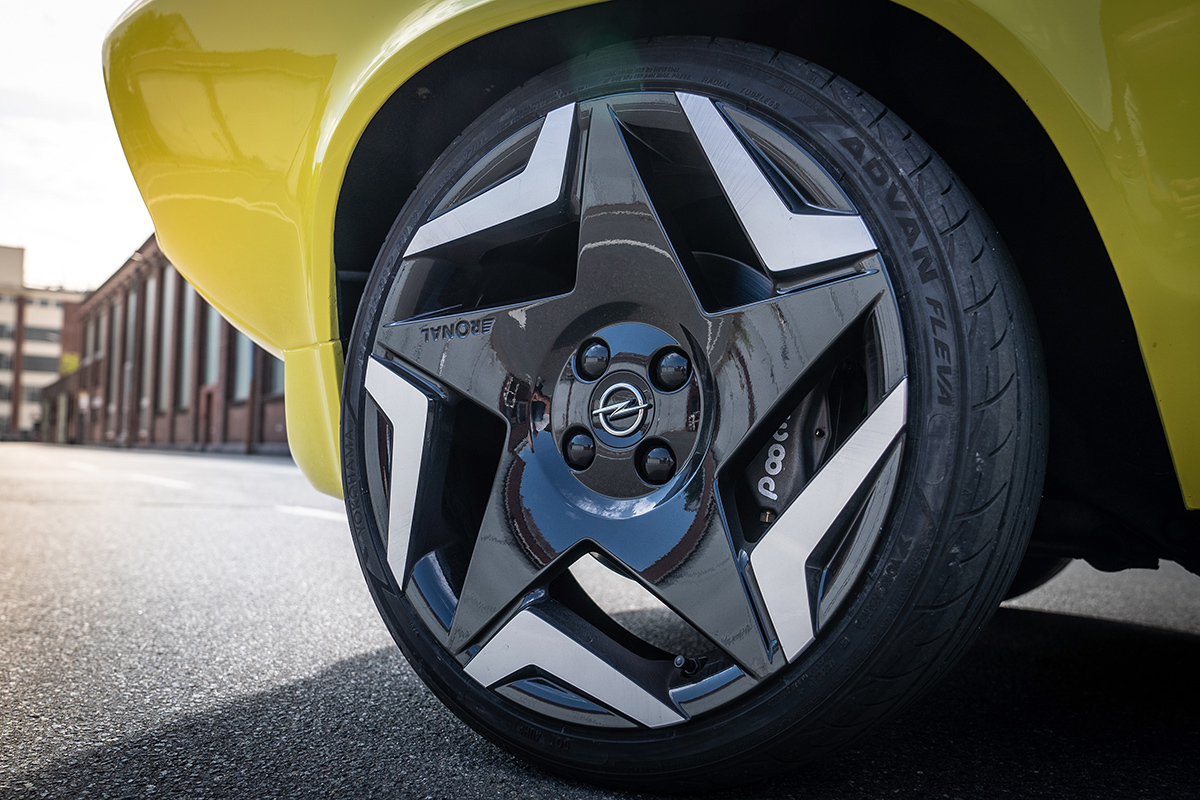 The bodywork of the new Manta GSe maintains the classic lines it had in the seventies and only a few minor tweaks give it a modern and very attractive air. Although its hue was orange, it is now painted in the traditional Opel yellow color and with the hood in black, another reminiscent of a livery used by its sports cars. The most striking changes are in the front, where the grill has been replaced by a front inspired by the Mokka, with a digital panel in which different animations appear, including the signature logo and other allusions to its origin. electrical The headlights are camouflaged behind said panel and are completely LED, framed by the daytime running lights characteristic of the latest models in the range.

The side view is distinguished from that of yesteryear by some striking 17-inch wheels -the old ones were 13- and by a discreet adhesive in the shape of a manta fish that incorporates a QR code. When reading it with the mobile phone, it directs us to a web page with information about the car. 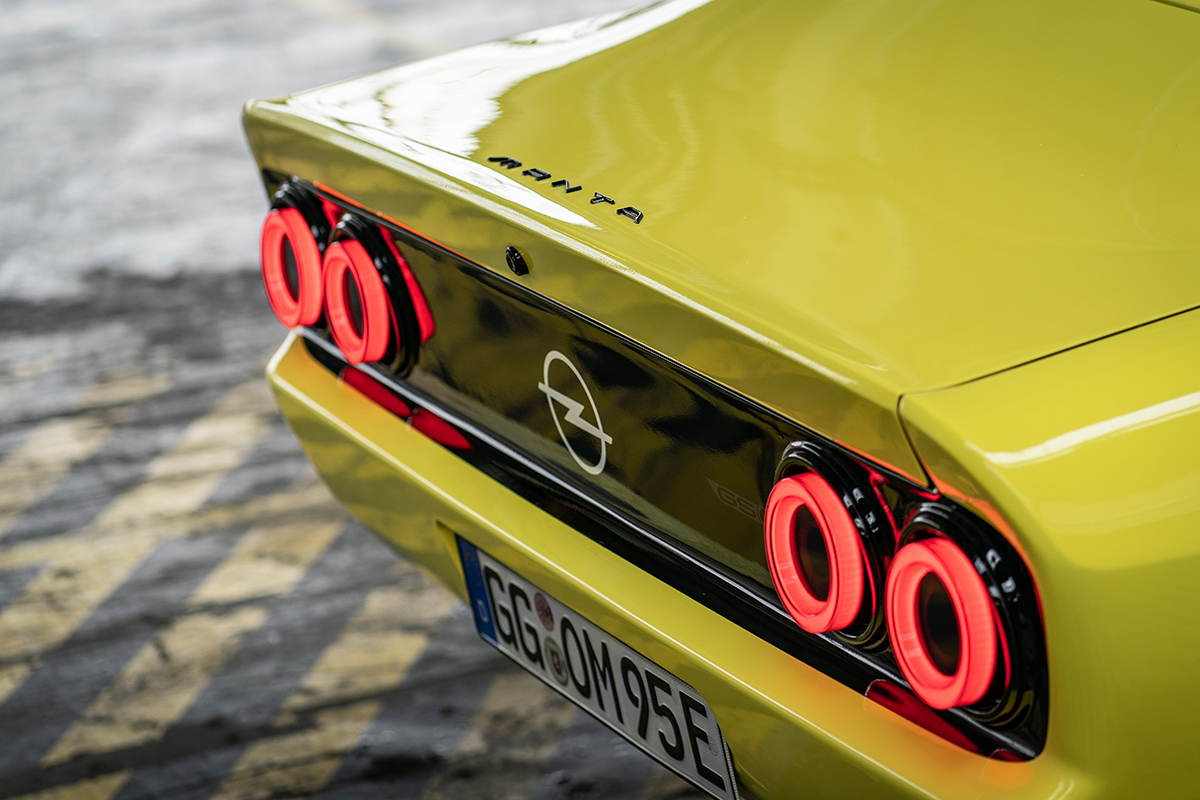 Behind the two round lamps are kept on each side, but now they are also led and an intense red that enhances that rear. To make the area between the two optical groups cleaner, the license plate has been lowered and is embedded in the bumper. The lettering with the car’s name, the window frames and other small details in high-gloss black round out a truly attractive result that makes the most curious to turn.

Inside what is most striking is the double digital display, 12 inches for the instrument panel and 10 inches for the central area, which is taken from the new Mokka. It has been successfully integrated into a dashboard that maintains its shape at the top and bottom, although it is now lined with an elegant Alcantara upholstery, just like the door panels, where even the manual windows remain. The seats, upholstered in the same material, are very sporty Recaro inherited from the Corsa OPC. The interior is completed with yellow details, maintaining that characteristic two-tone touch of the car. 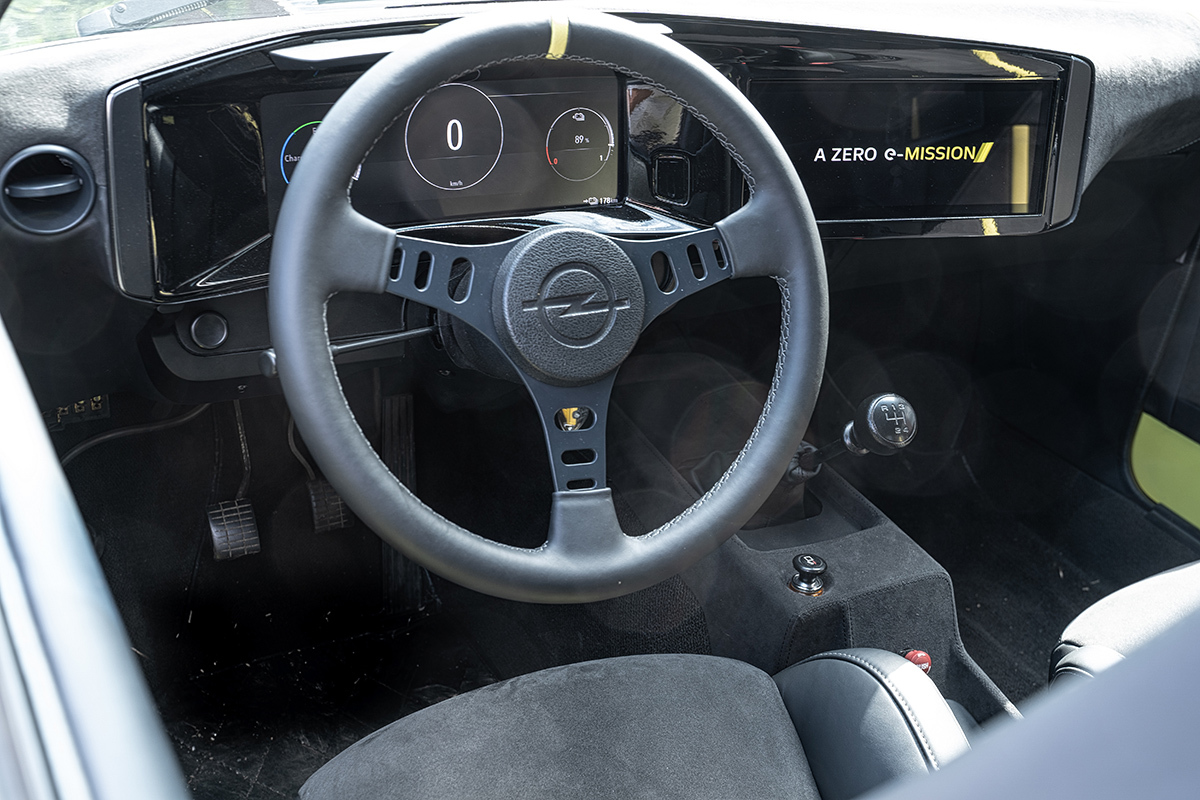 In the mechanical section, The gasoline engine has been replaced by an electric 147 horsepower engine, more powerful than any of those that had that Manta of the A series. However, making a curious nod to the past, the four-speed manual gearbox is preserved, which is coupled to the new engine and passes power to the rear axle. It is a peculiar set, because the car can actually work at any of the four speeds, thanks to the instantaneous torque of the electric motor, and because the clutch does not need to be used to start or stop; You just have to step on it when you want to go up or down a gear. The operation is peculiar and the friction of the gearbox produces a unbecoming electric noise, a sound that brings us closer to the vehicles of the past, but is not annoying at all. 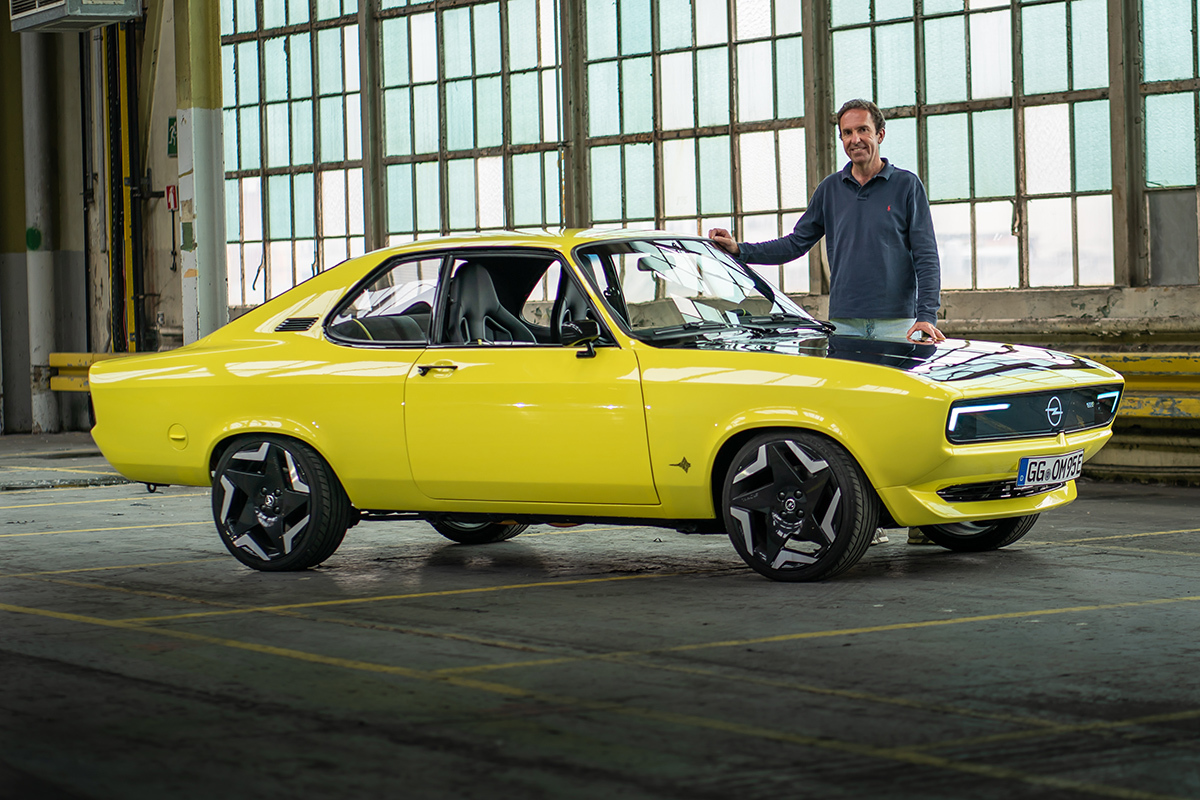 Autonomy of about 200 kilometers

Despite such a different mechanical scheme, the current Manta maintains its weight at 1,140 kilograms, a good figure for this type of battery-powered vehicle. The weight distribution is similar to that of yesteryear, with 48% of the load on the front axle and the remaining 52% on the rear. The on-board charger is type 2 and supports a power of up to 9 kW. The time to fully charge the battery is between three and four hours and the autonomy that is achieved is about 200 kilometers. The maximum speed, as with other electrics, is limited to 150 km / h so that the energy consumption does not skyrocket.

The suspension has also been conveniently tuned, with springs and shock absorbers different from those of before, the same as the brakes, which are larger at the front and disc at the rear rather than the original drum ones. 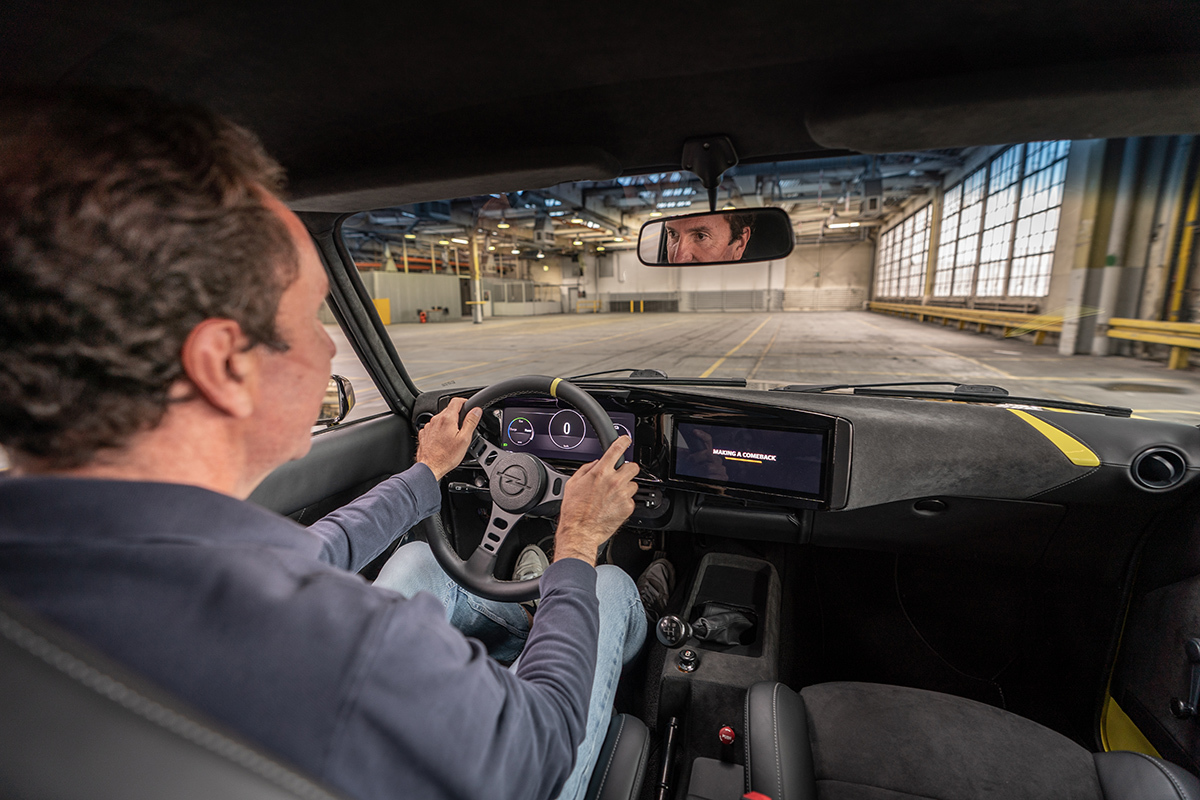 The prototype of the Opel Manta GSe ElktroMOD is perfectly finished and, in fact, we had the opportunity to drive fifty kilometers on the road with it. Its behavior is good and offers a high level of comfort, despite lacking things like power steering, which is only missing when stopped. The leather steering wheel maintains the old format, with three spokes and without any type of buttons, and other controls such as those for the heater, the indicators, the lights or the windshield wipers also retain their original appearance.