One of the three surviving copies of the Shelby GT500 Eleanor used in the filming and subsequent promotion of the movie ’60 Seconds’ has appeared on sale in Germany. This unit has been certified and is one of the few that actually made it to the stars of the film.

The Shelby GT500 Eleanor has become one of the most recognized and valuable variants in Ford Mustang history in its own right. We do not know if this fame will transcend to the next generations, as it happens with the real classics, but of course in recent years they have become tremendously valued pieces by collectors and what is more incredible, also its replicas, which in some cases have been sold for quantities of 6 figures.

For the remake of the movie ’60 seconds’ starring Nicolas Cage, 11 copies of these highly modified fake Shelby GT500s were created that were actually based on conventional copies of the ’67 Ford Mustang. The reason for this choice is none other than economic, since It is considerably cheaper to modify one of the many used copies of the Mustang that we can find in the American second-hand market to buy and repair a real Shelby GT500 of the time. 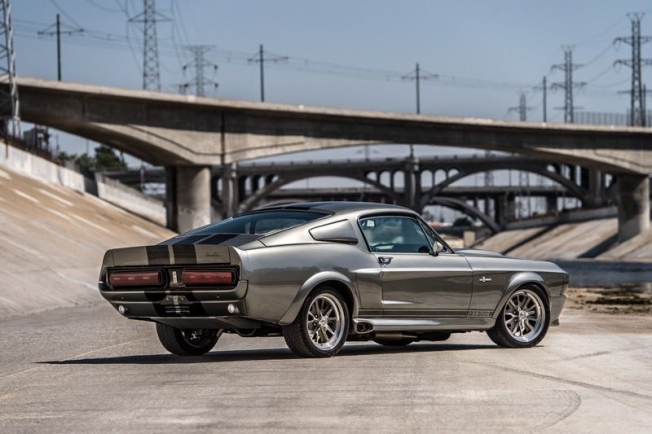 Its condition is impeccable.

These vehicles were created by Cinema Vehicle Services company in collaboration with designers Steve Stanford and Chip Foose. These models received an aesthetic clearly inspired by various Shelby versions, plus a large number of aftermarket accessoriessuch as the famous red button gear lever with ‘Go-Baby-Go’ lettering or the huge set of modern-looking wheels. Most recognizable, though, is its gray color scheme with longitudinal black stripes on the bulging front hood.

Of the 11 copies manufactured only 3 units became “Hero cars”, copies that actually appear in the film. Those three units were the only ones that managed to survive the filming and subsequent promotion of the film and of course, they are the most demanded and valuable. Although the truth is that some of its replicas have reached a very high value, in some cases exceeding $ 300,000. This does not seem like a very smart financial decision, since the euphoria for this model will disappear with the next generation of users, who will not have that movie as a cultural reference. As a sample button, How many fans can we currently find of the original Eleanor?

The unit that stars in these images is precisely one of the 3 originals used in the filming and therefore were conducted by Nicolas Cage himself and they appear in the feature film. Its current seller, a German specialist dealer, ensures that the specimen is accompanied by a certification proving its provenance. At the moment they have not wanted to reveal the price but the model has 117,184 kilometers of use and an impeccable state of conservation, very similar to the example that was auctioned for more than $ 800,000 at the end of last year or the one that recently appeared in a dealership from Dubai.

One of the original Shelby GT500 ‘Eleanor’ shows up in Dubai