The specialist Canepa has put on sale a copy of the Ford RS200 Evolution that has just undergone an extensive restoration process. Of this rare version, only 24 copies were manufactured that had a new supercharged engine that delivered more than 600 hp.

We have already talked about the Ford RS200 on occasion, since due to its radical nature and relationship with the wild Group B of the eighties it is one of the brand’s most outstanding collector vehicles. Although the truth is that it does not enjoy the media importance that models like the Ford GT40 have, since the competition version of the RS200 did not achieve the sporting success of its circuit brother, since the category for which it was developed was canceled shortly after from the launch of the model, the wild Group B.

However, it is still a very rare piece due to its low production and therefore very valuable, especially the units corresponding to the even rarer RS200 Evolution configuration. To be able to homologate the model in Group B, at least 200 copies of the corresponding street version had to be manufactured, which made these variants very scarce parts. Hence the Ford RS200 Evolution are so valued, well of this peculiar, more radical version, only 24 units were assembled, so these are very remarkable due to their meager production. To which is added its extreme characteristics, which remain remarkable even 30 years after its manufacture. 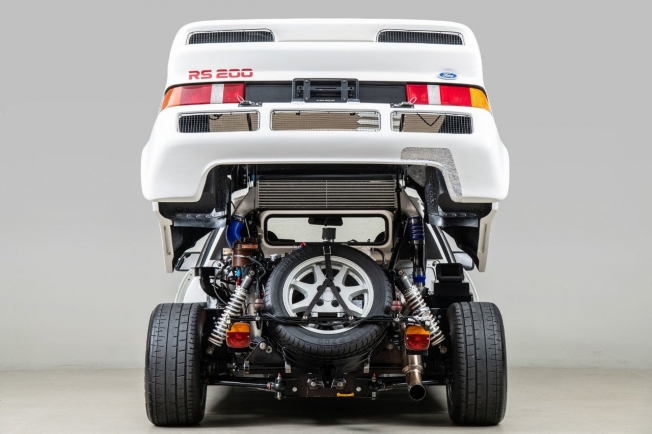 Its engine is different from the conventional RS200.

The Ford RS200 Evolutions did not have the supercharged 1.8-liter engine of the conventional RS200 variants, which delivered a power output of around 250 hp (253 hp). Instead they assembled a new block 2.1-liter Cosworth BDT-E that exceeded 600 horsepower in its standard configuration and that according to some specialists it could be easily tightened up to 800 horsepower playing with the turbo pressure. This allowed this radical variant of the model to be able to reach 96 km / h from a standstill in just 3.07 seconds, which was the acceleration record of the moment and that it was in force for no less than 12 years.

So these rare units of the Ford RS200 were capable of accelerating faster than models like the Ferrari F40, Porsche 959, Lamborghini Countach 25 Aniversario, Bugatti EB110 and even the McLaren F1.

The unit that stars in these photographs is currently for sale at the facilities of the American Canepa, one of the most renowned specialists in the world in terms of classic competition vehicles and which has a vast catalog of vintage racing cars. According to Canepa, this example of the Ford RS200 Evolution has recently undergone extensive restoration work and has an impeccable condition. Its price has not been confirmed but, curiously, they have revealed their maximum power, since the specific performance of these versions is usually described simply as greater than 600 horses. According to the California-based specialist, this example of the RS200 Evolution has 623 hp (615 hp).