Home>U.S.>One in five NYC voters implores the next Mayor to crack down on the “hell” of crime

In 2020 the Big Apple recorded the highest peaks in shootings and homicides in a year, 97% and 45%, respectively, in more than half a century. And everything indicates that the crime violence drama in 2021 it begins to escalate without pauses also in a discouraging way: the shootings until last March 7 increased by 42%.

Already in the first days of April, the death caused by the “criminal pandemic” in the streets of New York City has mourned several families, such as the Mexican food delivery man Francisco Villalva, 29-year-old, who was shot on a sports field in Harlem in a struggle to steal his bike.

In addition, some detonations last Sunday caused the death of one person and two injuries in Concourse Village in the Bronx, the same county where weeks ago a gunman was riding a motorcycle around the playground on Oliville Avenue and Rosewood Street, in broad daylight, firing multiple rounds with a gun. No one was injured.

At this hot spot of criminal violence and in the midst of the race to renew municipal authorities, a new report from the ‘Manhattan Institute (MI)’, as part of a series of recommendations for the next mayor of New York, reveals that while most New Yorkers demand measures to improve the economy, secondly a 21% of those consulted He implores Bill de Blasio’s replacement for more aggressive policies to ensure public safety.

The query shared by MI, shows that one in five voters in the Big Apple it is currently “concerned about public safety,” more than anything else in the midst of the pandemic.

More importantly, 68% of respondents “somewhat” or “strongly” supported “the use of a model of community policing, where the police actively collaborate with a particular community and focus on both general violence and serious crime.

“The next administration should adopt approaches to work closely with people, both with minority communities and the seriously mentally ill, so that the streets and the Subway can be safe again,” the MI researcher noted in the report, Rafael Mangual and the director of the police and public security initiative of that institution, Hannah Meyers. 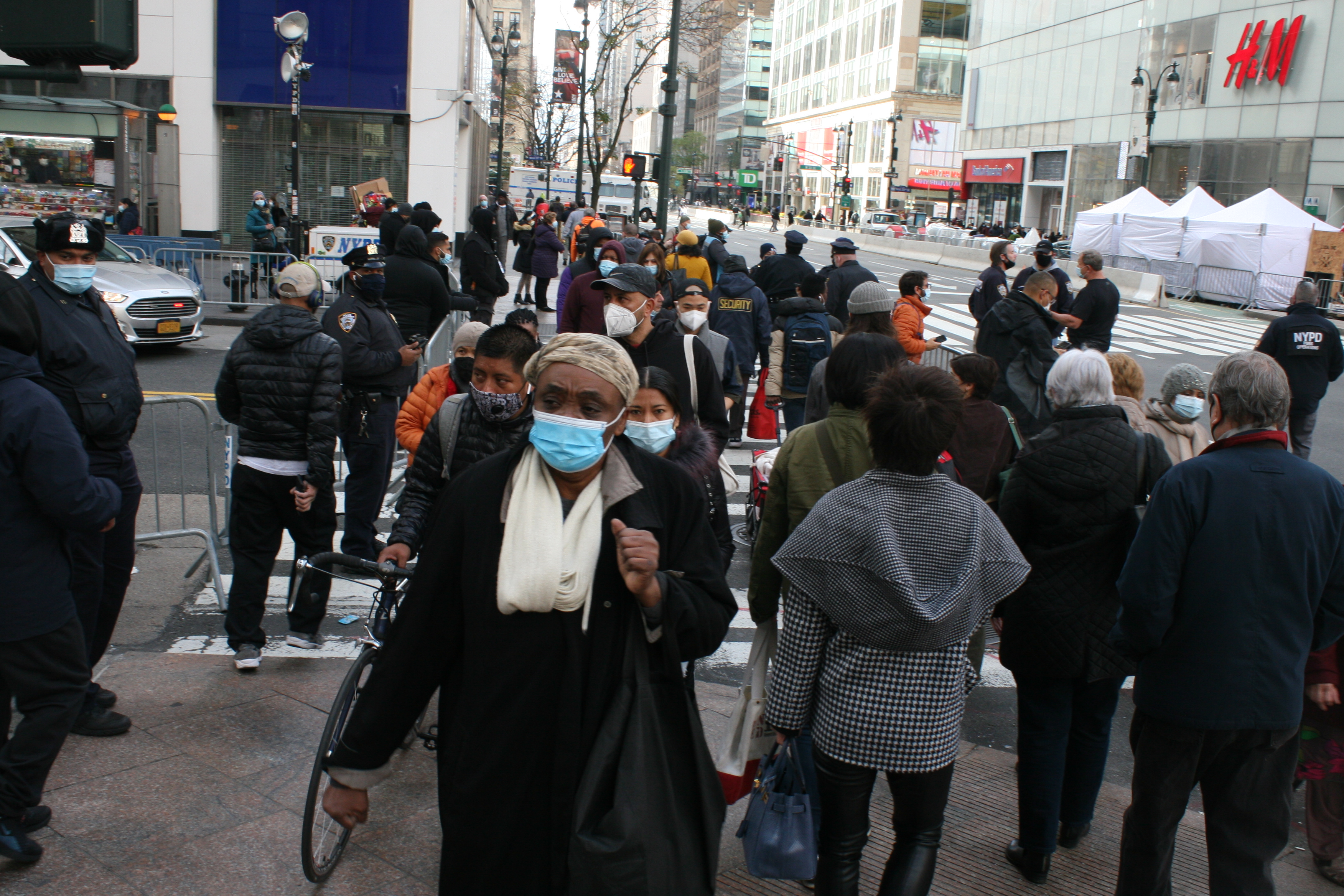 “If I could I would move”

While much of the bloodiest violence has been concentrated in a group of poor neighborhoods in the city, the growing problem of crime worries locals. most exclusive enclaves of the city. And that could be the main stimulus for many professionals to have on the horizon leave the city.

The ‘Manhattan Institute’ investigation underscores that crime control will be one of the biggest challenges facing the city’s next mayor, who will be tasked with returning to life. “Pre-pandemic normality”, since with the growth of remote work it is possible for many to relocate out of the Big Apple, without having to sacrifice their jobs, specify the study.

“The willingness of current residents to continue paying taxes to live here will largely depend on the degree to which they feel safe. Not just where they live. But where they work, where they find entertainment. Also in the trains and the buses that travel ”, specified Meyers.

69% of those consulted indicate that they would leave the city due to the “high cost of living”, but 47% would seek another destination fleeing from latent risks of violence in the different urban spaces.

The report describes that half of those who affirm that public safety is a “terrible” problem on the streets of the Big Apple, also confess that “they would prefer to move if they could.” 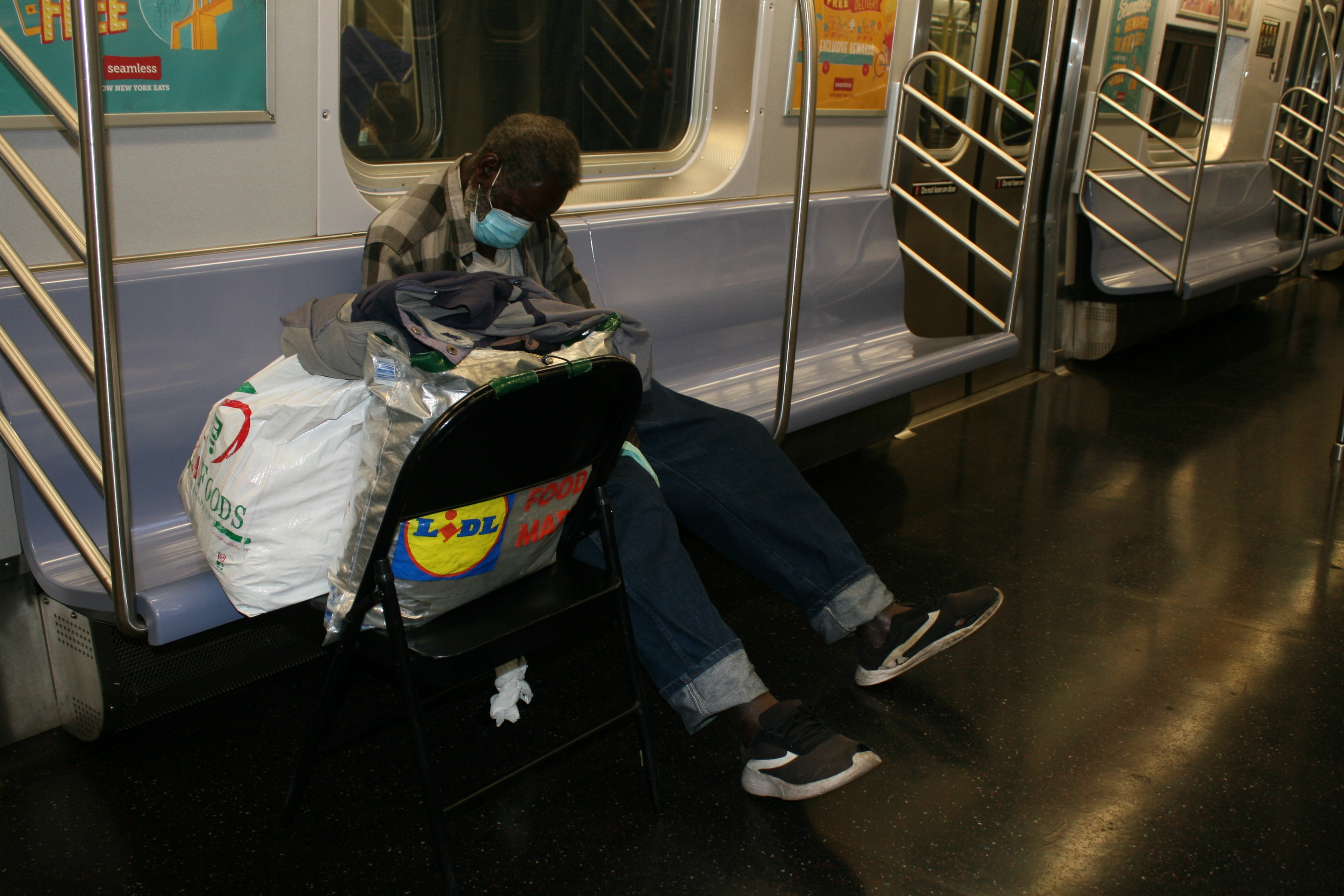 MI recommends a comprehensive plan to really address the drama of the mentally ill on the Subway. (Photo: F. Martínez)

Hell on the “Subway”

One of the vital spaces for New Yorkers that causes the most concern is the “Hell” the Subway has become. Already some statistics also reveal it.

The Panamanian José Sánchez, 50, he relates that since he resided in the city 15 years ago, due to his work routines, he must address Penn Station, in the heart of Manhattan, “Practically” every night. And he describes that in recent months he has seen “horror stories” for the first time.

“I don’t remember walking in fear through the city. I invite the authorities to see what happens at Penn Station at night. It is a center for the mentally ill that attack the passengers. New York is a disaster right now on the Subway ”, explained the immigrant.

The Sánchez’s “anguish” it is undoubtedly multiplying in a large part of the users of the transport system, especially in recent months.

Between Christmas Eve 2020 and Valentine’s Day 2021, at least six people were pushed to the subway tracks, these acts that terrorize New Yorkers are associated with the mentally ill who roam that system.

In 2020, the New York Police Department reported 26 incidents of people pushed in front of trains approaching the railroad tracks. That’s more than half of the incidents that were recorded during 1975-1991.

A 1992 study, cited by MI, found that during those 17 years, there were 49 shoving incidents on the Subway, victimizing 52 people. The study was able to obtain data on 20 of the 26 offenders who had been referred for psychiatric evaluation and treatment.

“This data makes clear that the city’s current approach to serious mental illness puts New Yorkers at risk. The next municipal president I should consider other policies to mitigate this risk, ”MI academics say.

The other side of this pandemic of violence in the Big Apple has to do with the judgment of Rafael Mangual placeholder image author of “A Safety Plan for the Next Mayor of New York City”, with the fact that the New York City Police Department (NYPD) canceled its academic training program in March 2020.

“We come from a year in which the officers faced untold numbers of protesters and looters. The Uniformada saw its superior ranks decline and eligible officers requested retirement at a much higher rate than normal, ”concludes Mangual.

From January to September 2020, a 72% more officers dropped out the department that in the same period of 2019 and the general staff of officers was reduced in total by 7%.

“The Big Apple will have to develop a plan to put more cops on the street, something that the most rigorous empirical analyzes tell us is one of the most impactful policies that any city can do to reduce crime ”, recommends the report. 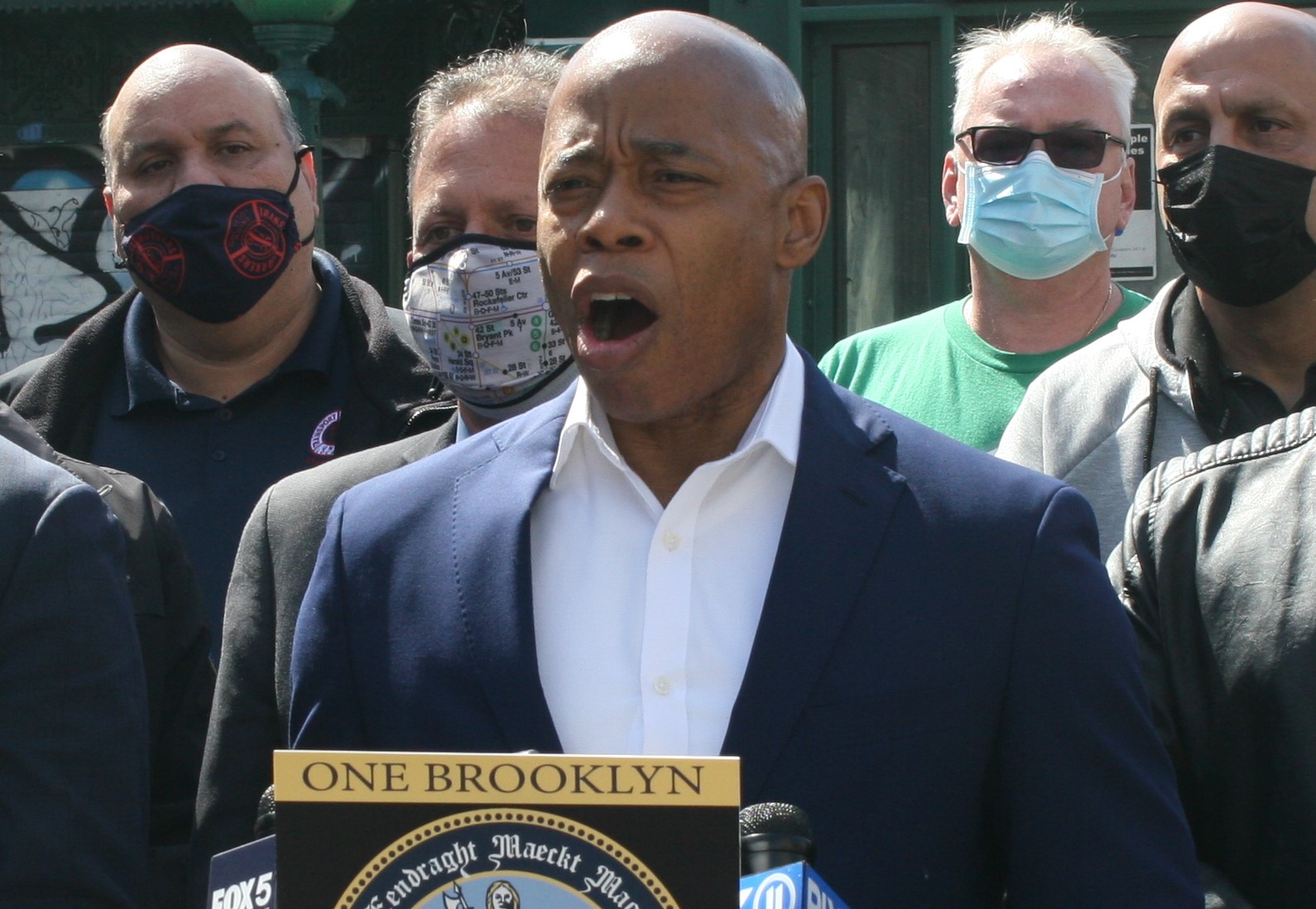 What have some candidates proposed?

Eric Adams a former NYPD officer and current Brooklyn Borough President who is in the Democratic race to replace De Blasio, has stated that to address the increase in crime in the Big Apple he needs focus on violent crime, especially where weapons are involved.

“We can and should have a police department that is fair and effective. Eric Adams has fought to eliminate prejudice and unnecessarily aggressive behavior from the Police Department, since he was an officer. And it will continue to do so, “he told The newspaper the spokesperson for the Adams campaign, José Bayona.

Among other lines of work, he proposes to reinvent the unit against crime as a unit against weapons, incorporating policemen with the temperament and abilities to take care of the communities by maintaining good relationships that help capture criminals.

The Adams formula includes strengthening gun laws so New York City residents are not at risk from weak normals in other counties.

“And we are going to move police personnel from low-crime areas to high-crime areas when there is a sudden increase in violent events,” explained Bayona.

The aspirant Andrew Yang in the programmatic line exposed in his web portal emphasizes that the “Good cops” they need to feel supported.

“Violence is increasing, as are hate crimes. That implies that we need agents to protect us. It is not enough to punish agents who act badly. For officers who are frequently in traumatic situations, the City must make sure they feel supported after responding to dangerous incidents”, Exposes Yang.

A Yang administration will seek reorganize the NYPD to rebuild trust among officers and New Yorkers, particularly with communities of color, to ensure that New York “recovers not as it was, but how it deserves to be: a safe city founded on equality and respect ”.

The pre-Democratic candidate emphasizes that the Big Apple lacks a real strategy for preventing, interrupting and responding to violence.

By appointing a deputy mayor for public and community safety, Andrew Yang will ensure that the city has a coordinated strategy at the highest level of the city government ”, establishes his campaign. 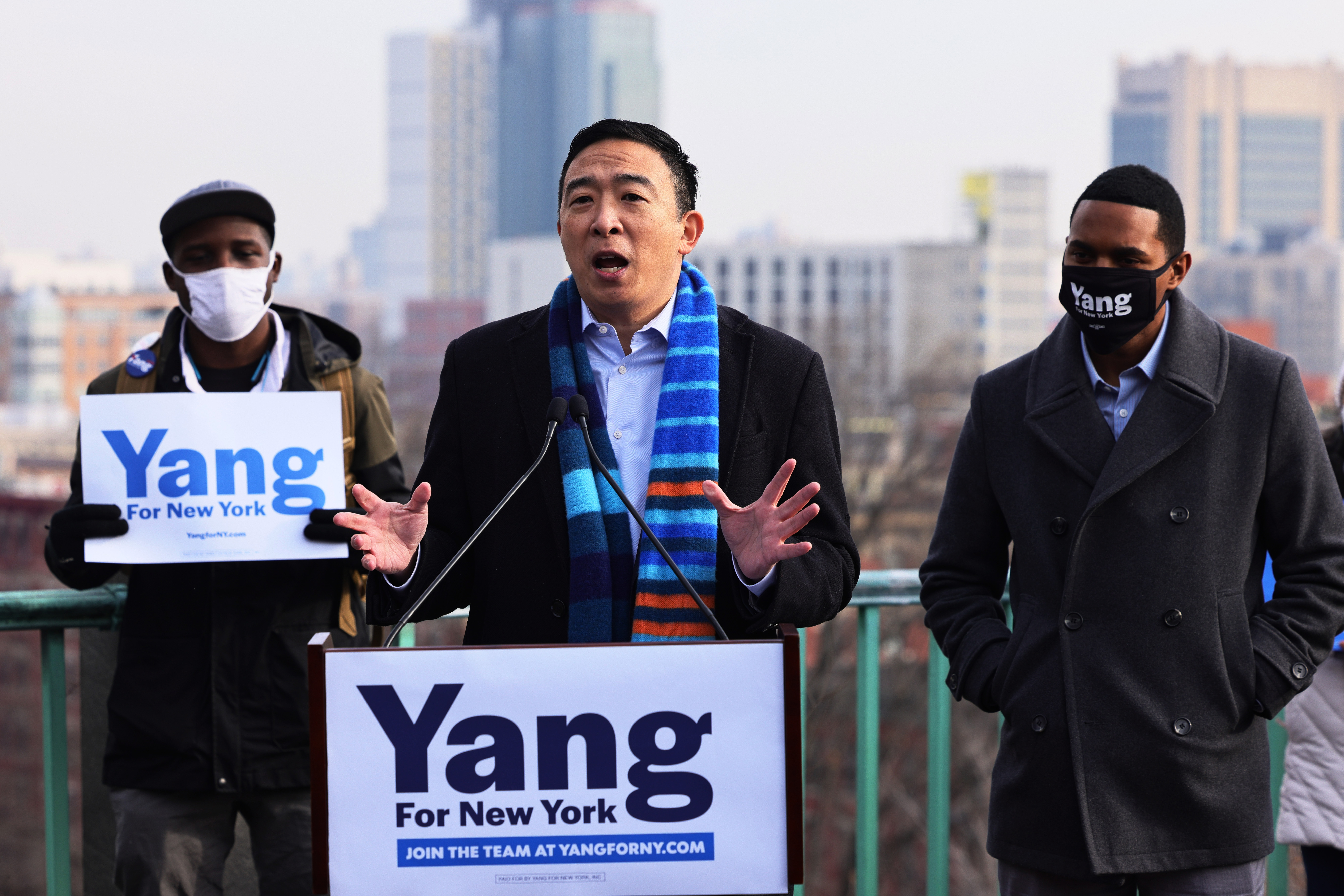 The 4 tips of the ‘Manhattan Institute’

Strengthen the ranks of the New York Police Department (NYPD) with a focus on attract highly educated people and motivated new recruits. Create a conception of community police that addresses violence and other quality of life issues. Work diligently to address the misconceptions that fuel the racial disparity, especially in minority communities.

Renew the city’s approach to serious mental illness with an emphasis on more and better supervision.