Hungary’s “second race” was impressive, after the accident that Bottas caused in the first of the two starts and that had to be neutralized. Esteban Ocon (Alpine) achieved his first F1 victory and shared the podium with Sebastian Vettel (Aston Martin) and Lewis Hamilton (Mercedes), who suffered from dizziness and fatigue. Behind, the two Spanish drivers: Carlos Sainz (Ferrari) was fourth after being overtaken by Hamilton in the last laps, and Fernando Alonso (Alpine) fifth, after starring in an impressive defense of Hamilton’s attacks in several laps. Also in the points were classified: the two pilots of Alpha Tauri, Pierre Gasly and Yuki Tsunoda, the two of Williams: Latifi and Russell, who scored for the first time this season, and closing the top ten: Max Verstappen, whose career was very complicated by seriously damaging his Bottas car in the first of the outings. For the second time in a row they “kicked” him off the track.

Valtteri Bottas received the sanction of losing 5 positions on the starting grid of the next race, Belgium -August 29- for causing the accident at Turn 1 in the first of the two exits.

At the start of the race in Hungary, Bottas took several riders ahead

After the departure accident that Valtteri Bottas initiated and that caused nothing less than five casualties – Pérez, Stroll, Leclerc, Bottas and Norris-, the pilots went to the pit lane to try to make the necessary repairs. Those who had the most work were those of Red Bull with the car of Max Verstappen, very damaged, and also those of McLaren with Ricciardo.

The order of the new starting grid It was like this: Hamilton, Ocon, Vettel, Sainz 4th, Tsunoda, Latifi, Alonso 7th, Russell, Raikkonen, Schumacher, Gasly, Ricciardo, Verstappen, Mazepin and Giovinazzi. Verstappen, in addition to being damaged on the first lap of a race for the second time in a row – it was also damaged by Hamilton in the Great Britain pass – was unlucky enough to have entered the pits when the safety car was on the track, which that made him go down to the last positions, and finally he came out 13th. Ricciardo also had his McLaren badly damaged, and at the second start he was in 12th place. The driver who had gained the most positions was Nicholas Latifi (Williams), a total of 12.

At 3:32 p.m. (CET) the 15 cars left the pit lane following the safety car on the intermediate tires, and the track was already dry. But instead of getting on the grid, all the drivers went into the pits to put dry tires (socks), while Hamilton was left alone on the grid! In the pit lane there was a real battle to see who put the dry tires first, and it was Ocon who came out first, followed by Vettel, Latifi and Tsunoda, while Sainz lost a position and took to the track 5º ahead of Alonso . 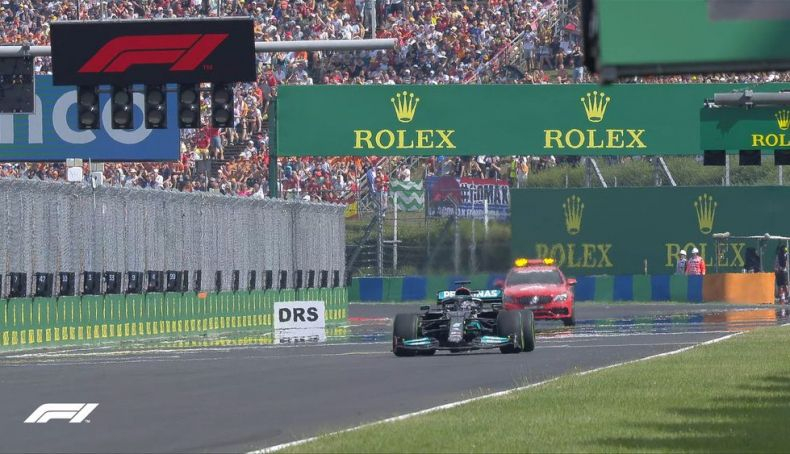 Lewis Hamilton alone on the starting grid at the restart

One lap later, Hamilton went into the pits to put up the media as well, and when he hit the track it was the last. Big mistake from the Mercedes team and Lewis Hamilton! They did not give him the correct instructions to enter the pit and he stayed on track without entering.

Esteban Ocon was the leader of the race followed by Vettel, Latifi, Tsunoda, Sainz 5th, Alonso 6th, Russell, Raikkonen… Verstappen 11th and Hamilton 14th. The difficulty of overtaking on the Hungaroring made the race a real procession, even Hamilton had a hard time doing it, and on lap 9 he managed to overtake Giovinazzi to place 13th. The Italian received a 10-second penalty for too much speed in the pit lane.

Verstappen, from 11th position, managed to overtake Schumacher, getting to touch both, although the stewards decided not to sanction them. They did it with Raikkonen who rolled eighth -10 seconds- due to dangerous exit from the box.

With 50 laps to go to the end of the race, Hamilton entered the pits for the second time and placed some hard. His intention was to go all the way with those tires. Y a twist later, Ricciardo and Verstappen walked in together. When they took to the track, Hamilton arrived, but he managed to get neither of them to overtake him. Hamilton was 10th, followed by Ricciardo and Verstappen. A good strategy the one to stop before them, they seemed to have patched up the mistake made at the beginning. Latifi, who was third, came in later, and Sainz rose to that position, followed by Alonso. 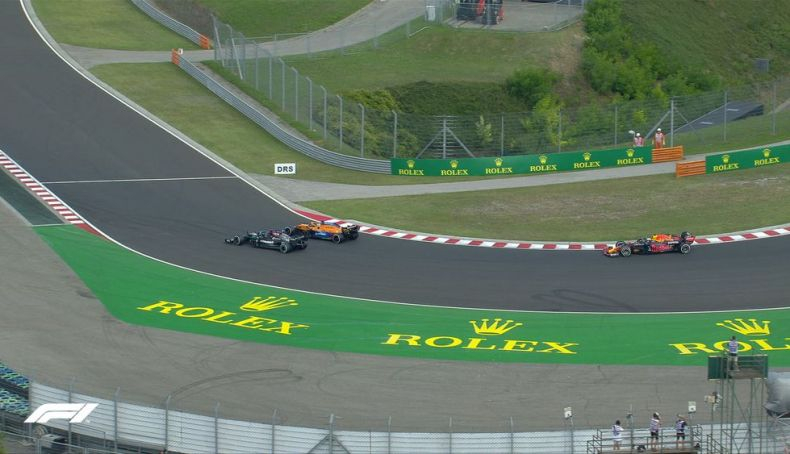 When Riccciardo and Verstappen left the pstop, they were overtaken by Hamilton

30 laps had passed and the first five had not yet entered a second time to put on some hard tires, all five were wearing socks – Ocon, Vettel, Sainz, Alonso and Gasly. Behind, Tsunoda, Hamilton and Latifi with the tough. Sainz, from third place, entered the pits, placed some hard and only lost one position to Alonso, he placed fourth in front of Hamilton with 3 seconds of advantage.

Came the mid-career (lap 35) with the first three riders still wearing the middle tires: Ocon, Vettel and Alonso. From behind everyone had the hard: Sainz 3rd, Hamilton 4th, Tsunoda, Latifi, Gasly, Russell, Ricciardo, Verstappen 11th … Then Vettel and Ocon entered, staying Alonso in the first provisional position, although he was the only one who had not placed the hard. He did it two laps later, and when he returned to the track he was fifth behind Hamilton. Ocon was still leading with tenths of advantage over Vettel, Sainz third, 5 seconds behind Aston Martin, with Hamilton 1 second behind Sainz, while Alonso was 8 seconds behind Hamilton. 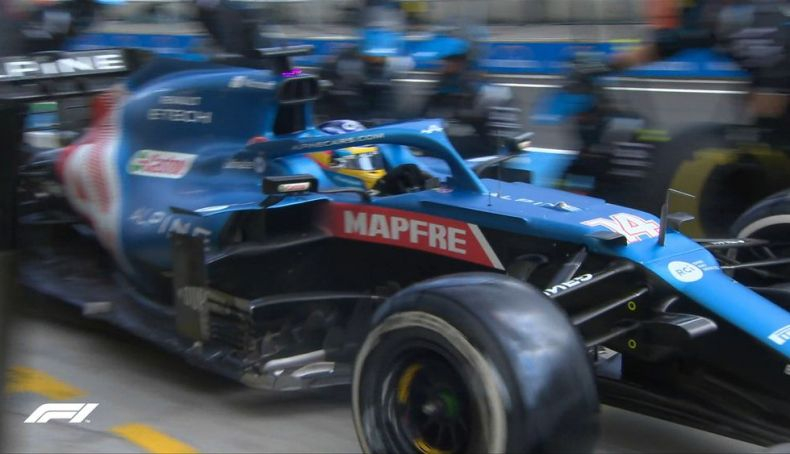 Verstappen, from 11th position, went back into the pits, put on medium tires to try to overtake a driver and thus get into the points. On lap 41 Alonso set the fastest lap in the race and was 7 seconds behind Hamilton.

Hamilton came back into the pits (v.47), he put on medium tires and when he left he was behind Alonso at 22 seconds, and in fifth position. Vettel, from the second, began to attack Ocon, he wanted victory. Alonso approached Sainz, he was 2 seconds away. A fierce fight for the podium in the last 20 laps.

The two Spaniards fought for the podiumAlonso (4th) already had Sainz (3rd) less than 1 second away, but Hamilton was dangerously close to Alonso from fifth position. On lap 56, Alonso’s defense over Hamilton was impressive during several curves, the Alpine did not pass through the Mercedes. Hamilton continued attacking the Spanish, he could not with him, and is that in addition to fighting for his position, Alonso defended the victory of his teammate Esteban Ocon, who followed first. Sainz, who was still third, pressed the accelerator fully, and the fight between his two pursuers helped him to separate from Alonso. 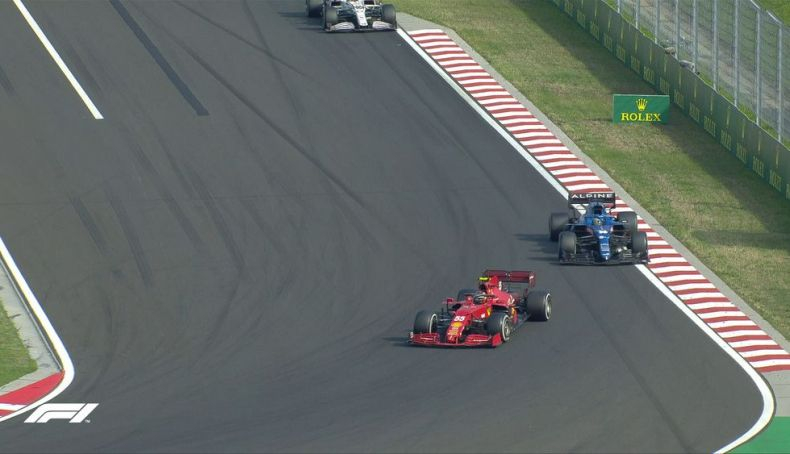 Alonso very close to Sainz, he wanted the podium

With 6 laps remaining, Ocon was still leading the race with Vettel 1 second, Sainz was third 6 seconds behind Vettel with Alonso very close, just over a second, while Hamilton was DRS behind the Alpine driver. Hamilton kept trying to overtake Alonso, he couldn’t beat him, until on lap 65, with only 5 to go, he succeeded. He then had Sainz in his sights, just 1 second away, until two turns later, Hamilton overtook Sainz and was already on the podium. 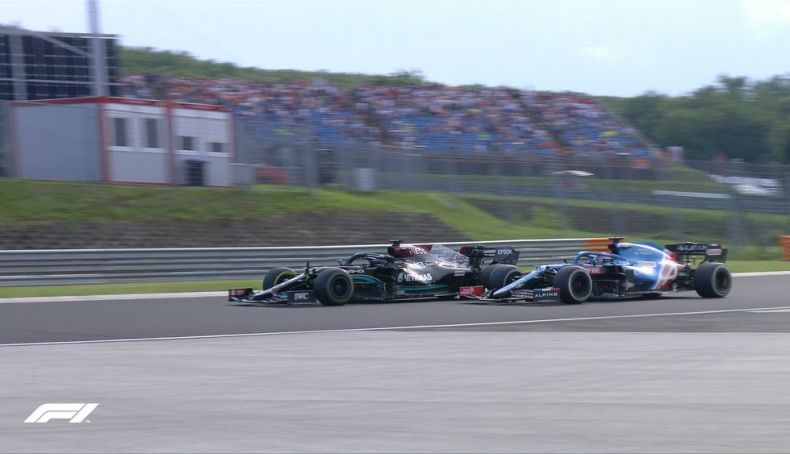 The last laps remained and it was a fight between Spaniards for fourth position: Sainz was fourth with Alonso less than 1 second. Ocon, Vettel and Hamilton were already on the podium.