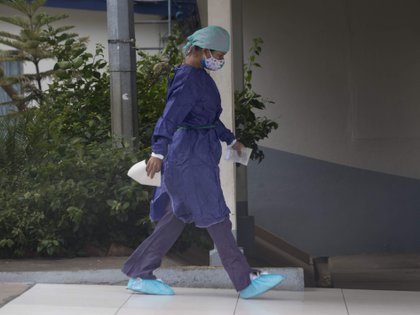 Managua, Nov 28 . .- The independent COVID-19 Citizen Observatory of Nicaragua reported this Saturday that, according to its records, 2,805 people have died in the country with symptoms of covid-19 or pneumonia, including nine in the last week.
The entity, a network of doctors and volunteers from across the Central American country, also reported 11,357 suspected cases of the disease as of November 25, a figure higher than the records provided by the local Ministry of Health.
Until last Tuesday, the Health authorities reported 5,784 confirmed cases and 160 deaths.
The government chaired by Sandinista Daniel Ortega has not specified the number of tests it has carried out and has limited itself to reporting the number of confirmed cases, deaths and recovered.
Likewise, the Observatory today warned that 822 health workers have been reported with associated or presumptive symptoms of covid-19, including 109 who have died.
The entity warned that in Nicaragua the exposure of people in agglomerations continues and that the health authorities have provided “inadequate attention” to the emergency caused by hurricanes Eta and Iota, which recently hit the country.
“It was reported that in the coastal neighborhoods of Bilwi (northern Caribbean) and indigenous communities, which were severely affected by the hurricanes, masks are not used, there is overcrowding and there is no access to water for washing hands,” he warned.
The Observatory advocated guaranteeing masks and urgent access to water, and that the Government, in the evacuation and shelter protocols, take into consideration the prevention of the pandemic.
The Executive has been criticized from various sectors for promoting massive events and agglomerations against the current of the recommendations of the World Health Organization (WHO) and the Pan American Health Organization (PAHO), and for not having suspended face-to-face classes in the middle of the pandemic and barely establish restrictions.
President Daniel Ortega has declared himself against the “Stay at Home” campaign because, in his opinion, it would destroy the local economy, which has contracted for the last two years and is largely informal.