NVIDIA has given us a major surprise by presenting the first GPUs specialized in crypto mining, although the American company has given them a very particular name: CMP, acronym for “Cryptocurrency Mining Processor”.

I know that several assemblers already launched graphics cards specialized in crypto mining during the first Bitcoin bubble, and that these had a very particular configuration, since most lacked image outputs, which made the price a bit cheaper, but made their resale very difficult. in the second hand market. NVIDIA’s approach is, however, totally different.

What the company Jen-Hsun Huang runs has done has been launch specialized graphics cores which, from now on, we will refer to as CMP, since it is the official name that NVIDIA has given them. In total, the green giant has confirmed four different CMP solutions:

These crypto mining solutions are fully specialized, according to NVIDIA, and have been optimized to offer a good cooling, facilitating air flow, they offer performance that facilitates investment recovery and they will be available to all assemblers, as well as OEMs, which means we are likely to see Pre-assembled PCs for crypto mining.

All the CMPs we have listed can be installed in multiple configurations (several CMPs working at the same time), and can be easily controlled with a single CPU, which reduces the investment required.

From the performance rates that I have seen in the official NVIDIA chart, I think that CMPs have been manufactured (it is pure intuition on my part, so take it as such) with GPUs that did not reach the appropriate level to shape a card graphics of general consumption at the height of the RTX 3060, RTX 3070, RTX 3080 and RTX 3090, that is to say, that NVIDIA has taken advantage of defective chips to advance this new range of products. Frankly, it seems like a success to me, especially considering the madness that cryptocurrency mining has unleashed and its impact on the prices of general consumer graphics cards. 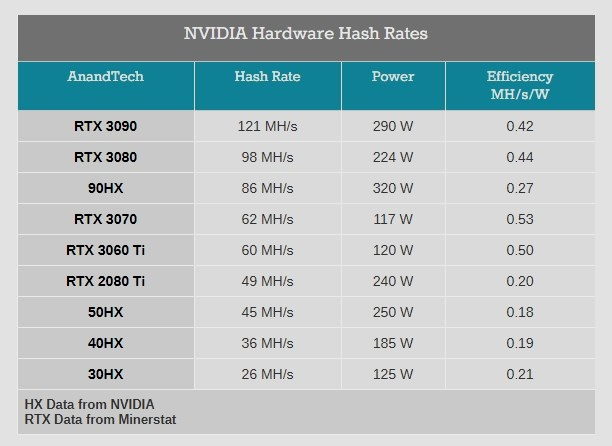 And it seems to me another success, in fact it would be fantastic if this measure were extended to the rest of the RTX of the 30 series, since would greatly contribute to normalize the situationAlthough it would only affect the new units that reach the market, since I do not believe that those who already have several units, and who use them for mining, will voluntarily install software that “cripples” their performance in this task.

It was commented that the RTX 3060 was especially good at mining, and that it offered a very high value for its price (329 euros), which made it an object of desire for the world of cryptocurrency. With this measure from NVIDIA, the situation changes completely, and for the better, since it seems that gaming lovers will finally be able to buy a graphics card at its normal price, as long as resellers do not prime themselves with the RTX 3060.

NVIDIA has not given the sale prices, and it hasn’t shown a reference design for these new CMPs either, so we can only wait. If you need more information, I invite you to take a look at the official website of the company.