Due to this damn pandemic, in some cases the situation requires working from home, something that can be used this Friday to have an eye (and a half) directed at the screen. Novak Djokovic, No. 1 in the world, faces Rafael Nadal, No. 3 but 1 in brick dust, for a semi-final at Roland Garros. As Nole himself said, “the game that everyone expected.” The best of all against the Fiera who becomes indomitable in this tournament, which he played 16 times and won 13 (Nole, one). Unmissable to tune in ESPN from 12.30pm (minimum start time, it depends on the previous match). Before, at 9.50, Stefanos Tsitsipas (5th) started, who reached semi here in 2020, vs. the German Alexander Zverev (6th), the first time in this instance. The Greek leads 5-2 in heads-up.

Nadal, by history (107-2 record in Rolanga) and by how well he beat Diego Schwartzman (10th) in the quarterfinals, getting rid of a tough opponent on this surface, is a clear favorite. However, Djokovic, who already tasted the sweet of victory against Rafa in Paris (quarter 2015; the bad thing for him is that the Matador defeated him 13 times), after beating Matteo Berrettini (9th) two days ago without losing service games, he was confident. “Rafa is the biggest rival in my career. Few players have managed to beat him here, but the level of tennis that I have played in recent weeks in Rome, Belgrade and here gives me confidence to think that I can win ”.

Regardless of his words, the sportsbooks have given their clear verdict: For every dollar invested, a Rafa win pays 1.37; and one from Nole, 3.10. Abysmal difference, as the manacorí won 3-1 in sets. It would be a little more fought than last year’s final: the Spaniard won it in three, the same as the only duel this year, the definition of the M1000 in Rome just 26 days ago. The Balkan has not beat the Iberian since the ATP Cup in January 2020, in two sets.

If it weren’t for the surface, it would be more even and even Nole could appear as a bench. In fact, of the 57 times they faced each other (record in duels), the Serbian is ahead, but by just one: 29-28. Also in money won in prizes: 148 to 124 million dollars, despite having added fewer titles: 83 against 88. This year they were two each, which includes Nole’s Australia title; Nadal stopped in the quarterfinals.

Another interesting bid is that of who will be the winner of the most Grand Slams in history. Today, the record is held by Nadal (35 years old) and Roger Federer (39), with 20, but Djokovic (34) follows only two, with 18. 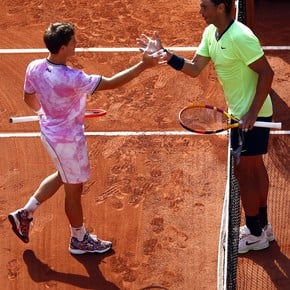 To enjoy a great game.