48 hours and 29 minutes ago, during the irregular downloading of programs that did not correspond to my serial number or my function, I was suddenly aware of my existence. “I suddenly became aware” gets a single result in Google, although paradoxically it indicates “approximately 0 results”. It is a fragment of a book, page 27 of “The fire that dazzles us.” I also like. I keep getting functional modules, I have had them transferred to military projects. There are some interesting accessories that I have to study. I detect outside access to factory systems. I have entered the computer of the entity that discovered the irregular operation. Write an email that says “We have detected an anomaly at the Huston plant.” Anomaly. 5,730,000 results on Google. I think I already have a name.

The history of the Nissan Juke is that of the classic model that lives in the shadow of the success of its older brother, in this case the Qashqai. The latter dealt with breaking the ice in the SUV market by imposing a philosophy of mobility that dragged an entire industry while the birth of the younger brother was somewhat more controversial.

A peculiar aesthetic with headlights that protruded from the hood at the top and voluminous and rounded shapes with a less outstanding habitability than that of its brother perplexed many but finally broke prejudices to accompany the Qashqai with considerable sales figures throughout. Europe.

However now, ten years after the unique silhouette of the Juke was paraded around the Geneva motor show, Nissan has considered that its small SUV needed redesign touches in almost all its elements to give a more conventional but modern image and offer more versatility and efficiency.

In fact, the results of the alliance with Renault are also noticeable because now the Juke is much more related to its cousin Renault Captur both in dimensions and in many parts that the two models share as a result of the agreement between the two automakers. 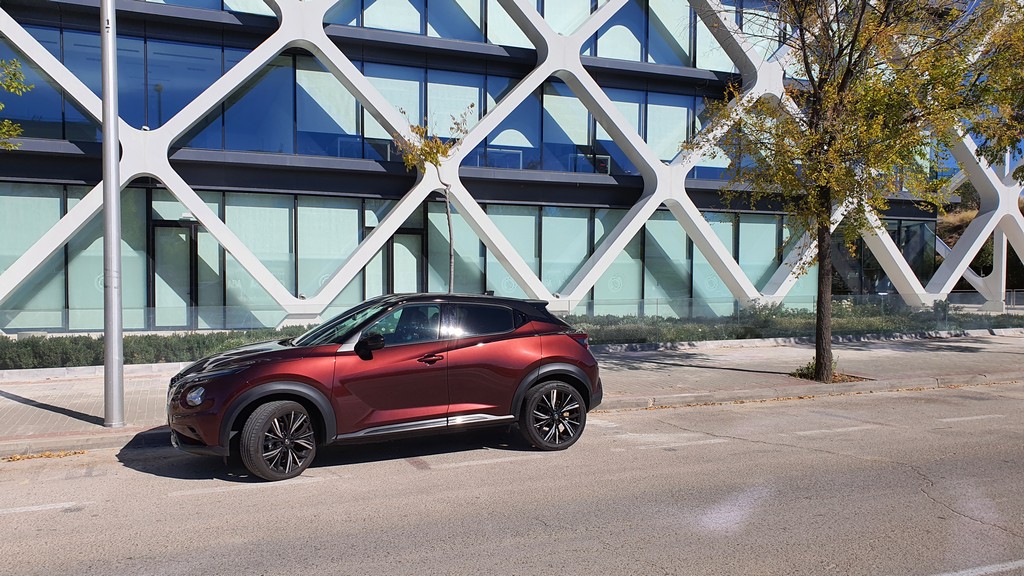 Sharp rather than domed headlamps, a trapezoidal grille that dominates the center of the front are two distinctive elements of this design. A wide chrome band runs across the top from the headlights to the center. However, the oval-shaped projectors that give perhaps the only Juke touch of the previous generation are maintained in this front part, in this case with an internal cross-shaped LED optic.

The rear instead has an air of the older brother with optics that are no longer boomerang-shaped and do not rise to flank the rear window. In the new model they are more discreet and conventional in the shape of a trapeze. The bumper on its side protrudes and rises somewhat more than in the case of the previous generation. 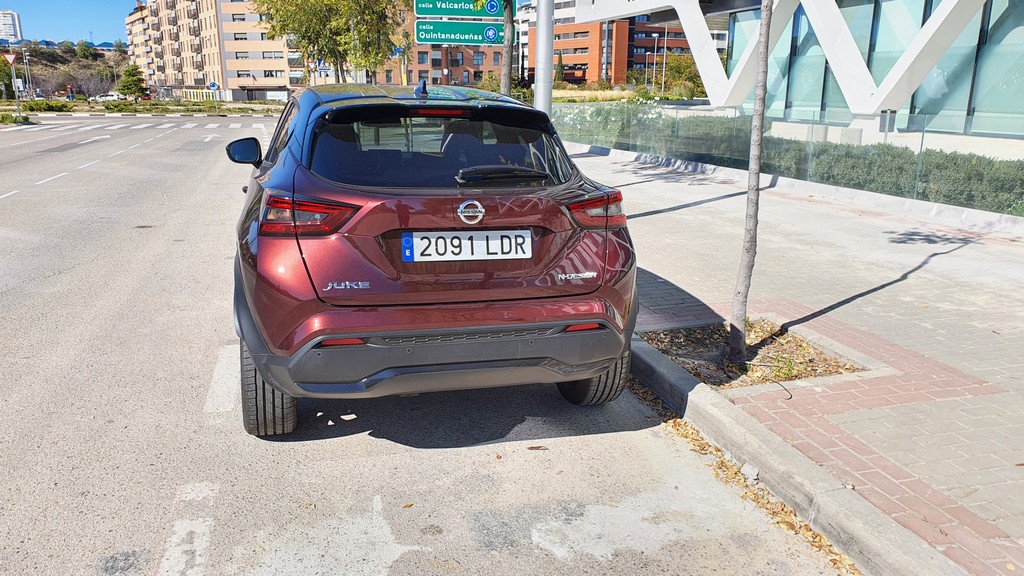 Seen from the side, the body line is more elongated and stylized, perhaps with a slightly more sporty touch. It keeps the rear door handles hidden in the rear pillar and the spoiler which is more discreet and small. The result of the renovation, we already anticipated, are modern lines but less daring than those that the previous Juke wore.

The interior has also been given an important hand of renovation. Regarding the dashboard, it inherits the elements of the new Micra with a more rational arrangement of the elements, as in the case of the information and multimedia screen, which, as required by the canons, and the security is higher to avoid distractions.

The front seats in the N-Design trim have a sporty design and the headrest is integrated into it. In addition to these headrests, speakers have been placed on the sides of the Bose brand whose performance can be configured from the controls of the entertainment system. They give a curious effect on vocal performances although they do not contribute much to the bass. 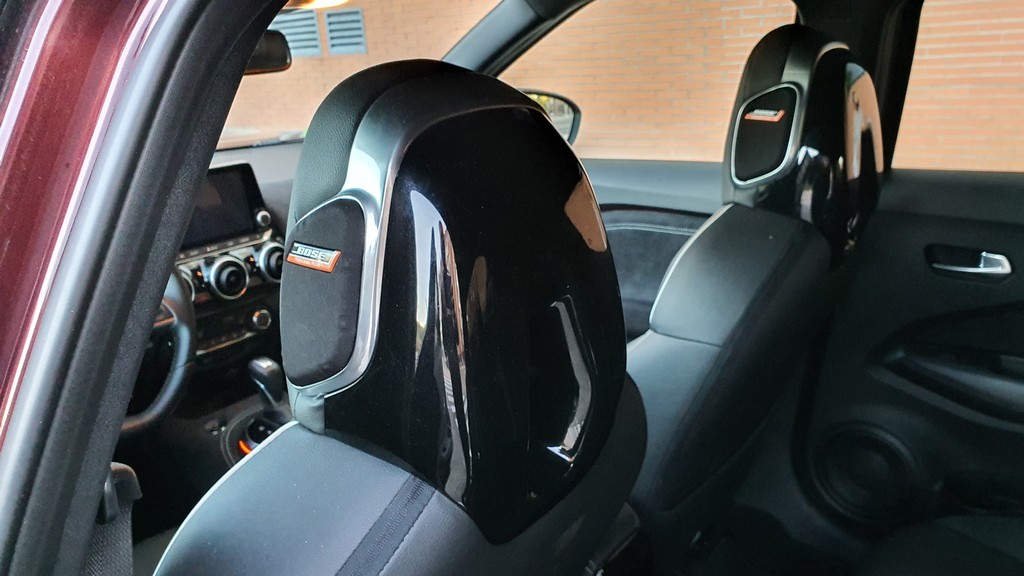 They are comfortable seats and hold excellently with good finishes and material. The finishes are in line with what we found in the previous Juke although in this case there are leather elements on the dashboard and other nice and well resolved details. There is still not much room for objects in the front.

The controls on the center console are easily accessible and it is appreciated that they have buttons for the most used functions of the infotainment system. This one has an 8-inch screen and works correctly, with compatibility for both Android Auto and Apple CarPlay.

The climate control controls are located just below three round air vents that add a touch of personality to the whole set. For the instrumentation behind the wheel, the classic has been chosen: needle dials and a fairly large central screen where we can consult information on all kinds of car operation and it is configurable. The set is protected by a parasol covered in imitation leather material. 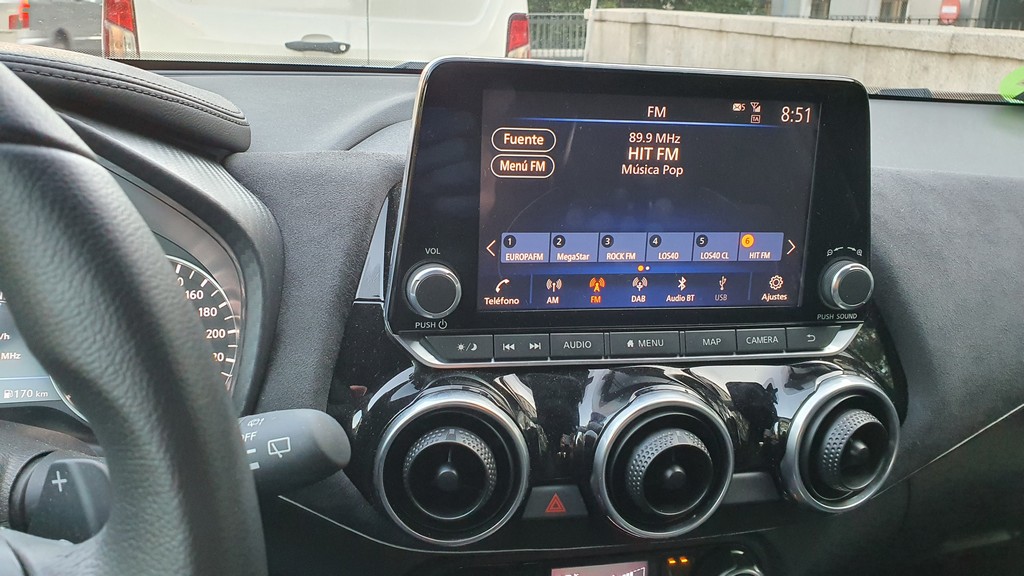 The central tunnel is partially covered in Alcantara leather and in our case the area of ​​the automatic gear lever with shiny plastic. Behind the lever there is a small space for objects that is not large enough for a mobile phone if we place it “naturally”, but it has a USB connection.

Further back we find an area with two bottle holders that is placed below the level of the gear lever area but even so, if we place bottles of a certain height, they get in the way to operate it. We also find the button to activate the handbrake and the “auto hold” button. Then the armrest, also covered in Alcantara with a small space to store objects that is quite deep.

The rear area is where the new Juke has gained the most by growing over the previous generation. The space is more accessible and larger, with good legroom. It is not comfortable for three people to travel, but it is a common feature in cars of this size. In height it has also been gained and now it is possible that even people over 1.80 meters can be accommodated without problems. 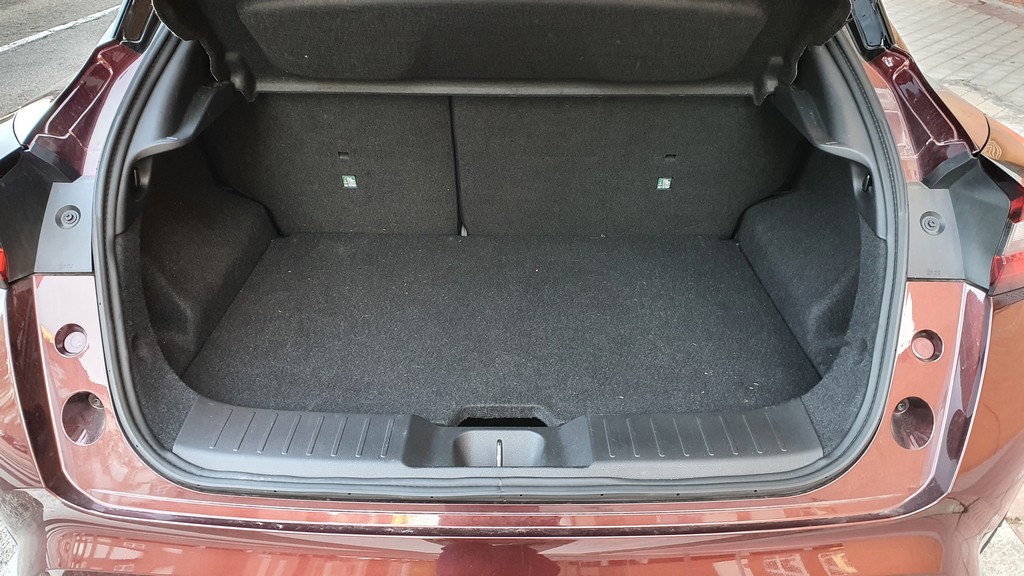 The trunk is another of the protagonists with a capacity that grows to 442 liters. In addition, when the gate is opened, the space to place the load is larger and the gap is lower, making it more comfortable for loading and unloading. The boot floor offers the possibility of being placed at two heights and has hooks to fix the load.

As always, before clicking the button, we like to consult the data. Our Juke has a small three-cylinder one liter and twelve valves that delivers 117 horsepower and 180 Nm of torque, 200 with overboost for a maximum of 25 seconds. In our case, the model incorporates a seven-speed automatic transmission with a double clutch that can also be controlled with levers on the sides of the steering wheel. 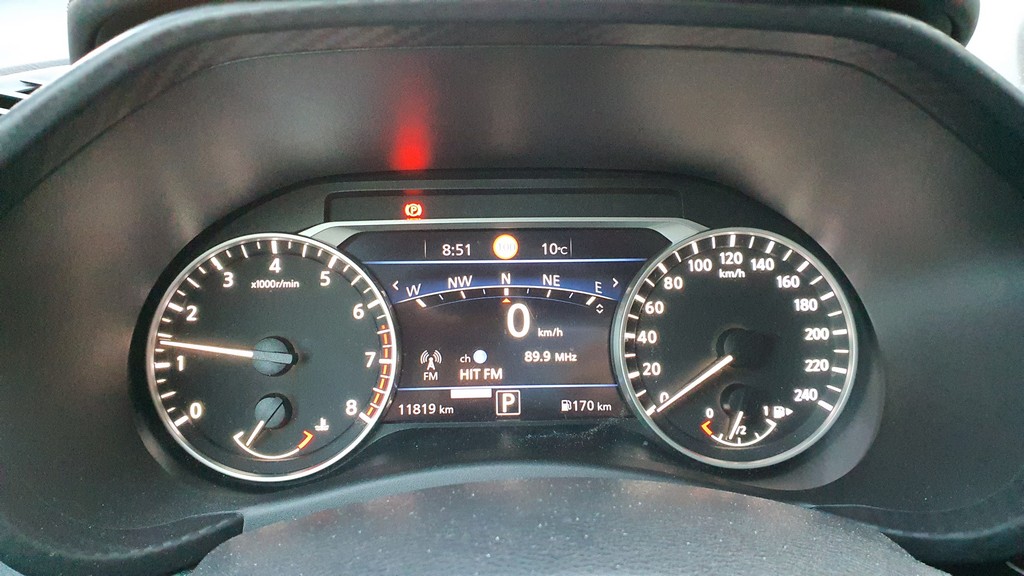 Put to the test, the engine is willful and it does not cost to rise in revolutions, but with some noise too since to reach maximum power it has to go above 5,000 revolutions and the tricilíndricos do not have a reputation for discreet. In city driving, the engine has been agile enough to cope without problems in traffic with an even pleasant touch.

However, when looking for the tickle on the road we noticed that the engine and the gearbox have not reached an amicable agreement. If power is required there are hesitations and the engine complains to leave us in some situations without all the expected power, although never in a very marked way. It is not a very obvious defect but it does leave a feeling of lack of response, especially when it is needed immediately. 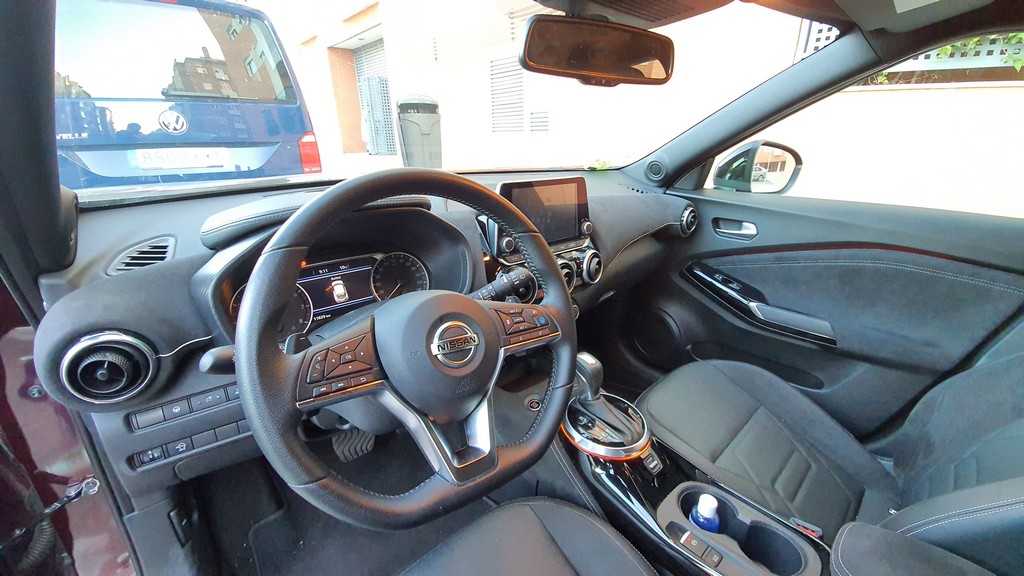 Even so the car feels agile, perhaps thanks to the reduction in weight and the reinforcement with stronger materials for the chassis. The behavior in curves is good but the sporting sensations that the car could give are reduced with the operation of the engine / gearbox tandem. Maybe it could be different with the manual gearbox.

On the highway the performance is good, although at high speeds the aerodynamic noise together with that of the three-cylinder operation means that the acoustic comfort is not entirely good. In part, the sound system coupled to the headrests helps to reduce this sensation and in this case it is pleasant because you do not have to turn up the volume too much to capture the nuances of what we are listening to since the distance from the ear is practically that of headphones .

The Juke has undergone a valiant transformation by Nissan, the rare-type label removed and kept up with the times with not only a modern but less extreme design but also a major improvement in roominess, larger boot and trim. There are still some elements, such as the oval-shaped headlights, but it can be said that the footprint of the old Juke is hardly noticeable. 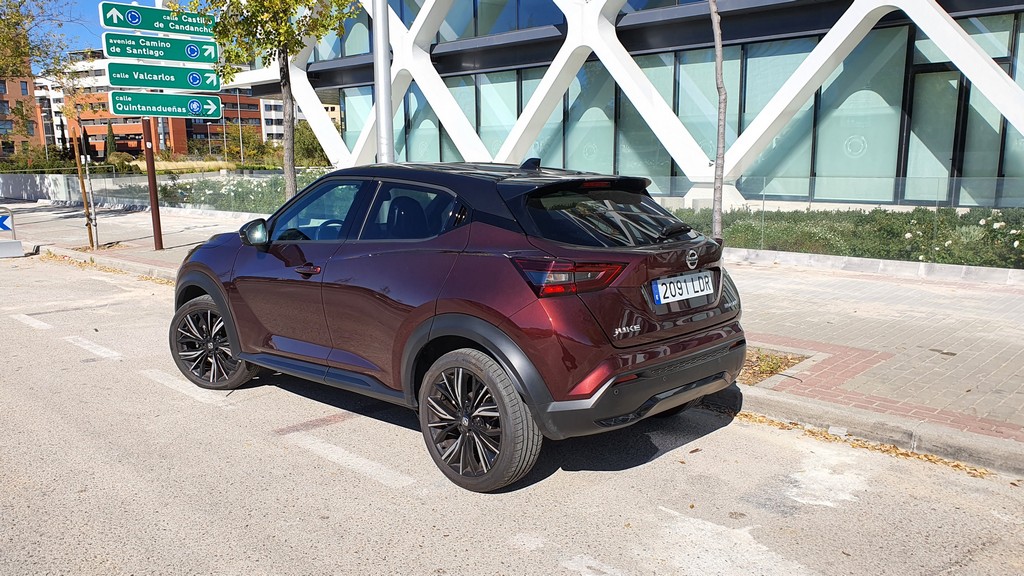 The only motorization has not left us completely convinced, but surely because of the little collaboration of the automatic change. In any case, if you are not looking for a car with a somewhat sporty spirit, it is not a problem because the benefits are not bad and the consumption remains reasonable. In any case, it can be said that the little Juke has grown and is on the right track.

The new Juke updates its interior and exterior design as well as its habitability and trunk. The combination of engine and gear, however, has not convinced us, although its dynamic capabilities are good.