Nicole Neumann’s outrage at the bullying her daughter suffered

Nicole Neumann It is not about keeping things quiet. The model has her character and when it comes to defending one of her daughters, she goes out onto the field with all the artillery, as happened this Friday. He was spending a quiet afternoon, and he had fallen into the fashion of answering questions from his followers. That’s what she was doing, when she stopped all exchange to tell about a situation that outraged her.

“Do you know what happened to my ten year old daughter?”the panellist asked in an introductory way. With a slow but firm tone, Nicole recounted in great detail the unpleasant event that Allegra lived, one of the daughters she had with former soccer player Fabián Cubero. First, he located his followers in time and space: to take advantage of the outdoors, and once the merciless sun fell a bit this Friday, Nicole authorized her daughter to go skateboarding through the streets of the country where she lives .

“I let them ride only if they have the helmet on,” the model warned, and gave more details: “They are pretty, pink helmets with little drawings, which they already had of bicycles and rollers.” Proud of her helmet and skateboard, Allegra went outside to hang out for a while while her mother watched her from the door. After a while, the little girl came back with the comment that made Nicole explode. “Mommy, two gentlemen made fun because I was wearing a helmet”. 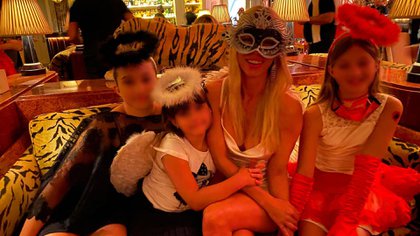 Nicole and her daughters in Miami, when the model celebrated her 40 in style

“I can’t really believe what is in people’s heads; like two grown men, surely parents because here most of them are families, they make fun of a ten-year-old child ”; Nicole began her release, without losing her composure but hardening her speech: “What are you making fun of? What are we trying to prevent if he had a blow, which is very common in boys, from breaking his head against the asphalt, or against the curb? “Nicole wondered with an increasingly angry face.

“I don’t quite understand what is wrong or funny for them to be making fun of a creature for being cautious and taking care of themselves”he asked himself without waiting for an answer. And far from calming down, he redoubled the bet: “If you live nearby, come ring the bell that I will explain a little bit. I don’t know what care they have with their own children, I try to take all the precautions “, she concluded indignantly.

A few days ago, Nicole was reunited with her daughters Indiana, Allegra and Sienna after they were on vacation in Mexico with their father and his partner, Mica Viciconte. The trip was surrounded by controversy, since the model seemed to find out once that her daughters were in Aztec land. This was stated by the journalist Karina Iavícoli in Us in the morning, information that Nicole did not want to deny or ratify.

Nicole Neumann and a question: Did your ex take your daughters on vacation without notifying you?

Oblivious to these issues, Cubero chose to continue enjoying the beach and recreational activities with his girlfriend and three daughters and did not refer to the versions that circulated in Buenos Aires. The one who did express himself was Viciconte, although he did so figuratively. The former Combate published a romantic photo of the couple in the Caribbean night, in one of the patios of the luxurious all-inclusive hotel where they stayed.

Surrounded by palm trees, water fountains and lights. There, Mica and Fabián posed for the camera, smiling and hugging. “Here we are”, Mica wrote in reference to the happiness with which they spent their vacations. And he added a strong message. “Without disturbing anyone”, he emphasized, and although he did not refer to the reason why he made this clarification, many linked it to the versions that indicate that the former soccer player took his daughters on vacation abroad without notifying Nicole Neumann.

This was just one of the many chapters of disagreements that Nicole and Cubero had after their separation in 2017. This was precisely one of the topics that Nicole was asked in the virtual exchange: “Why is it so hard for you to get along with your ex? ”, they questioned her. In reflective mode, the model did not shy away from the topic and replied: “The question is not well addressed, I do not know either … that is two”. Surely in outrage at what happened with Allegra, find at least one match.

Wanda Nara’s father said that he does not know his granddaughters, Francesca and Isabella Icardi, and that he has no relationship with Mauro

Nicole Neumann lived a paranormal experience: “We chased a UFO for two blocks”

The tender video of Juan Pablo Varsky’s baby with his dog: “He takes care of her and gives her kisses”