Home>Tech>“Nicolas Cage has taken advantage of the fame of his memes.” Paco Alcázar and Torïo García, authors of ‘The first 100 films of Nicolas Cage’

Nicolas Cage is an enigma. But an enigma that can be explained. Seen from the outside, it is a kind of indomitable whirlwind that brings together horrible and extraordinary films in his career (sometimes at the same time), cult classics and video store trash, mainstream hits and auteur cinema. An apparent black hole of folly, but there is a prism that helps explain everything: the internet.

This is what Paco Alcázar and Torïo García have done, authors of the illustrations and texts respectively of ‘The first 100 films of Nicolas Cage’, which has just been released Caramba! Is about a review of the entire career of the protagonist of ‘Mandy’, in chronological order and profusely illustrated for the inimitable and extremely troubled style of Alcázar. But this book is more than just a string of IMDB trivia or sparkling comments. This volume tries to understand the phenomenon, and in large part it does so through the culture of the meme.

We have spoken with them to explain it to us and they tell us the origins of the project: Paco Alcázar says that the book “comes from a strip of mine in ‘Cinemanía’ that was dedicated to Nicolas Cage. Documenting me for jokes I saw that there were loads of his movies in recent years that I had not seen and that they looked crazy“So he got hooked on seeing all the actor’s films. And” as a result of a commission in which I had a great time drawing him from Superman, I said to myself ‘I’m going to talk about all the films with a small comment on each one’ “

In the documentation process, Torïo García, a specialist in Nicolas Cage who has been publishing the ‘Niccagepedia’ for years, a fanzine dedicated exclusively to him, joined the project. According to Alcázar, “we decided to go big, a la Nicolas Cage, and collect as much information as possible. Two and a half years with nonsense. “And according to García:” It has been like making sense of the last ten years and putting everything in order. “ 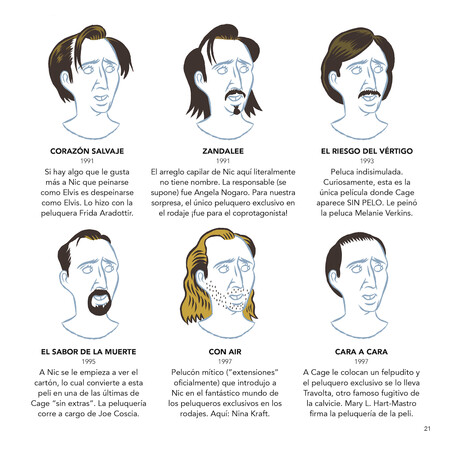 The secret of your success

We asked the authors about the evolution that the actor’s career has followed, and Alcázar is clear that “he is not a normal actor. There is something delusional, a personal and eccentric vision of acting, of his own career, that unites everything. . He has been a figure in the indie cinema of the 80s, an actor in family comedies of the 90s, an action film superstar, he has worked with the best directors of his generation, he has descended into the hells of the B series, and has preserved his essence “

And the viewer’s perception is key in these cases. As García says, “a Sometimes the fan is a lot of fans: you can genuinely like it, you can also be shocked by a bad movie, but you know that you will always find Nicolas Cage giving everything “. Or as Paco Alcázar sums up, with him you experience” admiration and irony at the same time, which is what makes him unique. “That is, first-rate material for the meme effect.

García is clear that “The internet has played an important role in the explosion of fanaticism for Cage of the last ten or twelve years. The explosion of memes coincides in time with their fiscal problems: that is why you have him simultaneously working on projects of dubious quality, while the internet recovers unknown films from the beginning of his filmography. “And of course, there is a key moment, a point.

Torïo García affirms that this touchstone is very clear: “The beginning of the phenomenon is in ‘Nicolas Cage losing his shit’, which collects all the craziest snippets from his early films and puts them all together with the music of ‘Requiem for a dream.’ “The Internet does the rest:” That’s the starting gun, and you have a career in a time of decline that adds to a rising popularity ‘by the laughs. ‘”

But what does Cage think of all this? Alcázar says that “he was not amused, I think it is understandable, but at the same time he has given a new approach to his career, films that had gone unnoticed have come to light, and they have given him new popularity.” This mix of joke cult actor and genuine talent has been tapped into by Cage who, Garcia claims, “He has managed to redirect the fame that comes to him through memes and take advantage of it in his films. There are movies in which he clearly says ‘I know this sequence is going to be taken out of context, and I’m going to take advantage of it.’

That is why there are some recent films of the actor that are true sources of memes: Alcázar says that “of the last ones, ‘Willy’s Wonderland’ is a meme factory at almost pornographic levels. Or ‘Arsenal’. I think that from time to time he says ‘Come on, I’m going to do this for memes.’ But in the end, the cartoonist comments, a unique phenomenon remains “from a kind of linguistic perspective: a kind of sentimental vocabulary has been created based on decontextualizing emotions from his films, and all kinds of messages can be given. “

And it is that Nic is unique. Paco Alcázar points to the fact that “a single actor is capable of giving all this range of reactions, this had been done with memes from different sources, but that a single actor provides it is unique. That a single race has seen its meaning changed in this way seems very interesting to me“An authentic phenomenon that we can now know in depth and that these two authors explore in all its polyhedral hyperintensity in their book.