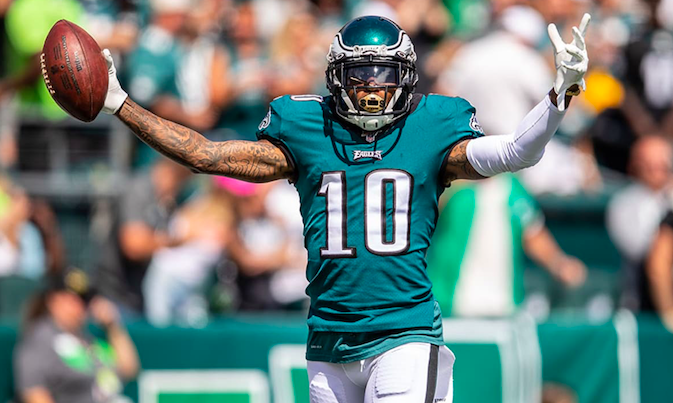 The English writer and playwright Douglas Adams wrote a few years ago: “Nothing travels faster than light with the possible exception of bad news which obeys its own laws.” And that would be the case of what the Eagles of Philadelphia at least from the perspective of the fan who yesterday read and found out through television that the team would not continue with Carson Wentz and today that the wide receiver will not continue in the organization DeSean Jackson.

Before the media found out the news and the frenzy began around one more casualty in the team of Philadelphia, the now former player, it is better to put it as the wide receiver took advantage of the number of followers he has on social networks (1 million 300 thousand followers on his Instagram account) so that through this channel he would first announce the news that he would no longer wear the green colors of the Pennsylvania team.

The 34-year-old player posted the following on his social networks:

From #Eagles WR DeSean Jackson on Instagram. No sources required here, as he’s announced he’ll be released. Was due $ 9 million in non-guaranteed salary this upcoming season. As he says here, he still wants to play at the age of 34. pic.twitter.com/tpubvYnjT1

Why is that decision made? You have to put a bit of context and then try to ponder if it was a success or another mistake that the team has made in recent days. Philadelphia.

DeSean Jackson He was in his second stage as a player for the eagles and the following season would become the last of the relationship that had originally been agreed. If he remained on the team, he would have to be paid around 9 million dollars. This decision to free him to find a new team means Philadelphia saved $ 4.8 million.

So putting it into perspective, was it a success or a mistake? It was the least risky decision after looking at the statistics of the player’s performance in his second stage with the team. He only played eight games in two seasons; that is to say, of the 32 games that he could have played, he was only in a quarter due to injuries but it was untenable to continue with the same trend in Philadelphia.

The player assured through his Instagram story that the most vertical player within the NFL you are looking for equipment … we will have to wait for the organization to decide to give you a hand and above all to know if you can be healthy for at least half the duration of your hypothetical new contract.