Porsche continues testing the new 911 GT3. The German sports car, hunted practically naked as these latest spy photos show, has been hunted again with a more than special company, a prototype of the Cayman GT4 RS. Two purebred sports cars that will be presented in 2021.

Once again, the 992 generation of the new Porsche 911 gt3 it has been hunted practically in the open. Some spy photos are what you can see the most radical model almost naked, not to say as is. And it is that its state of development indicates that the presentation can occur in the little less than a month and a half that remains to end 2020, although it indicates that it will arrive at the beginning of 2021.

The spy photos they also show the more radical younger brother, the Cayman GT4 RS, hunted during a technical stop at one of the exits of a German Autobahn, a more than peculiar company for one of the most special versions of the 911 range. The camouflage hardly covers some details on the front and rear, including the ‘GT3’ emblems from the back into even the headrests of the seats. 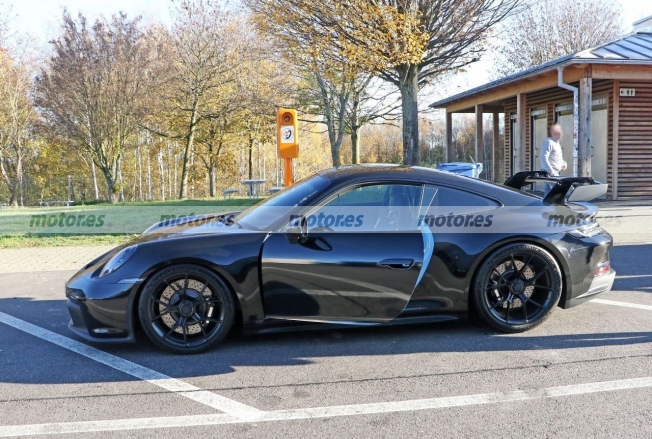 The inner door arch of the Porsche 911 GT3 reveals the body color under the vinyl, Gulf Blue

Among them, they also see part of the tubes of the roll cage structure that the rear seats have become. Our photographers also took advantage of a short conversation with the engineers on board the Porsche prototypes to take a look inside the 911 GT3, appreciating body color in “Gulf Blue” on the door sills, under the black vinyl.

A sporty and elegant color for a model that presents such an aggressive and radical aesthetic, highlighting the powerful front end inspired by that of the Porsche 911 RSR GTE from Le Mans, the large perforated brakes, the rear exhausts arranged in the center or the fixed spoiler on two large masts that focus all eyes on any other element.

Under the rear hood, the 2021 Porsche 911 GT3 will feature the six-cylinder boxer with 4.0 liters and without supercharging. A block that will yield a maximum power of 510 hp, a dozen more than the previous model, associated with the change six-speed manual and also PDK dual-clutch automatic. 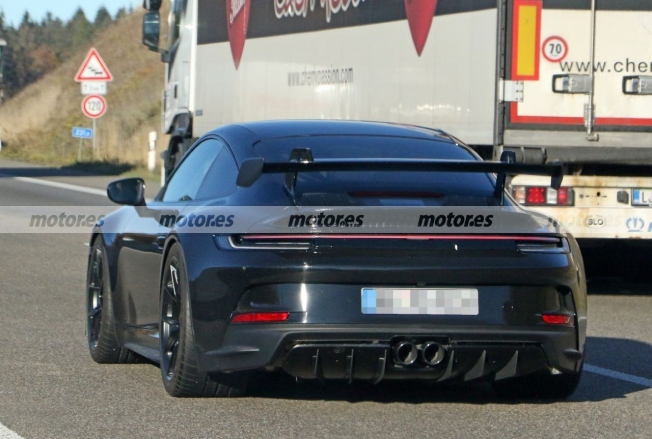 The imposing rear of the new Porsche 911 GT3 2021, naked only hiding the emblems