One of the things that Netflix stands out for is not leaving us many weekends in a row without a horror film. After the end of ‘The Street of Terror’, fans of the genre will be able to calm their hunger (for blood) with the German ‘Blood Red Sky’.

Nadja (Peri Baumeister) and her son Elias (Carl Koch) are on a night flight from Germany to New York when a group of terrorists, led by Berg (Dominic Purcell from ‘Prison Break’), take control of the plane. But the thing does not stop there, Nadja keeps a dark secret, she is a vampire.

He faces a difficult choice, that of revealing his secret to save his son How long will he hold out hiding his true identity, with which he could destroy the assailants in an instant?

Spoilers for ‘Blood Red Sky’ below

‘Blood Red Sky’ begins at RAF Lossiemouth, Scotland, as a group of soldiers rush to prepare for a plane to land. Something has clearly gone wrong as a sniper team is in place and a passenger on board is on a terrorist watch list. As the plane enters, Colonel Alan Drummond (Graham McTavish) talks to the injured person landing on the plane, but warns him not to get up from his seat, as Drummond believes he is the terrorist.

A boy, who we soon realize is Elías, comes out of the cargo hold of the plane and the soldiers take him away to see if they can find out what happened. We then returned to Elias arriving at the airport and found out that he is traveling to New York City with his mother Nadja so that he can receive radiation therapy.

Elias talks to scientist Farid (Kais Setti) who is heading to New York for a convention, and it appears that Nadja is living with leukemia while treating herself with cytarabine. However, Nadja is infected with something that is far more deadly to those around her than to herself.

Shortly after takeoff, the plane is seized by terrorists, including Berg, Eightball (Alexander Scheer), and Bastian (Kai Ivo Baulitz). Nadja tries to protect Elias, but only ends up getting shot in the chest multiple times by Eightball, the most unhinged of the group. Although she is not dead, oh no.

In flashbacks during the movie, we learn that Nadja was traveling with her partner Nikolai when their car broke down on the road. Nikolai was killed by a vampire when he tried to get help at a nearby cabin and when Nadja investigated, he was bitten by the vampire who later died from the sun.

When he returned to the cabin, he met the vampire’s father who was working on a cure, only to realize that being a vampire cannot be cured. He tried to kill Nadja, but she killed him and took all his research. This has allowed him to control impulses over the years, which means that he has not drunk human blood, until now. 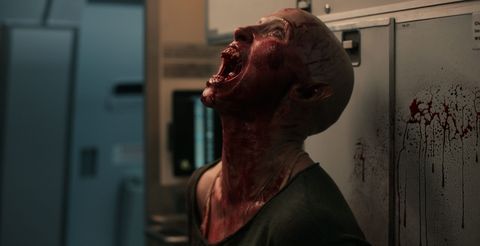 It is not very clear what the terrorists are planning, although they are trying to make it appear that the Muslim passengers on board, including Farid, took over the plane. They divert the plane and are about to head to an unspecified destination when Nadja returns, having killed a member of the group.

She plans to let the terrorists jump out and then make the plane return to its original destination. However, Eightball discovers her plan and forces her out of the cabin threatening to kill a child, which only causes Nadja to fatally bite Berg and she kills him before he turns around.

While the other terrorists do not believe him, Eightball is certain that Nadja is a vampire and he defends himself with an ultraviolet light. After stunning her, Eightball takes some of her blood, but before he can kill her, Elias saves her. He threatens to shoot the terrorist and ends up shooting at a window, depressurizing the plane.

The resulting chaos allows Nadja to escape as the terrorists lower the plane to prevent everyone on board from suffocating. Nadja locates Eightball in the cargo hold where he has been locked up to inject himself with Nadja’s blood. When he starts to change, Nadja sets the place on fire, seemingly killing him.

Well, it would have if the fire hadn’t been extinguished. When Nadja manages to lure and lock the remaining terrorists (except Bastian) in the cargo hold, Eightball breaks free. While in the cabin the passengers begin to attack Nadja despite her efforts to save them.

Unable to reach New York City now, the plane is diverted to a nearby airport when carnage breaks out on board because a dying stockbroker lets vampires out in hopes they will bite him. All the passengers begin to be attacked and change, leaving only Nadja, Elias, Bastian and Farid safe in the cabin.

Nadja knows they can’t land as the vampires will just wait until dark and go crazy in Scotland, so Farid has a plan to blow up the plane with the remaining fuel after they get out safely when they land.

Elias goes against his mother’s wishes to head to the cargo hold to get the detonator that the terrorists brought on board (it was only to blow up a door, not the plane). She obtains the detonator, but is soon cornered by vampires. Nadja feeds on Bastian to regain her strength and heads to save Elias. 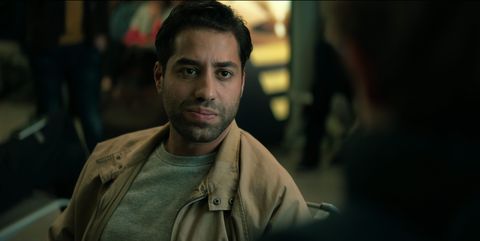 She fights Eightball until Elias opens the cargo compartment door and Nadja pushes Eightball out. He tries to hold on and Farid has to tip the plane towards the sun to burn it down, killing him once and for all. Elías tries to calm his mother, but she rejects him and we pass Elías with the soldiers.

They mistakenly assume that Farid is a terrorist, as it turns out that the real terrorists had lured him on board with a bogus convention. Elías tries to make sense of them, but they sedate him and decide to wait until the sun goes down. Bad idea. Soldiers break into the plane at dusk and capture Farid, pulling him off the ship. However, surprise surprise, the rest are quickly outnumbered by vampires. Fortunately for everyone else, Elias had pulled the detonator on his teddy bear (yes, really) and escaped from the RAF base just in time to blow up the plane, killing the other vampires and Nadja.

Colonel Drummond quickly realizes his mistake and frees Farid, who reunites with Elias, fulfilling a promise Farid made to Nadja to keep her son safe. We are still not clear at the end of ‘Blood Red Sky’ what the terrorists intended to do after hijacking the plane. A passenger assumes that they wanted to crash it to shorten the stock market, but this is not confirmed. What we do know is that regardless of what they had planned, they probably immediately regretted it.

Blood Red Sky is available to watch on Netflix.