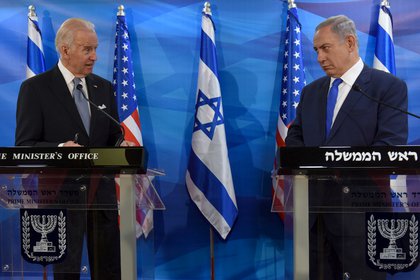 Israeli Prime Minister Benjamin Netanyahu held a “warm” telephone conversation with the President-elect of the United States, Joe Biden, on Tuesday. As indicated in a statement by the president’s office, both agreed “to meet soon to continue promoting the firm alliance between both countries.” In turn, he assured that the president-elect “reiterated his deep commitment to the state of Israel and its security.”

Netanyahu, for his part, “said that the special bond between Israel and the United States is a fundamental component of the country’s politics and security.”

The president had already congratulated Biden and Kamala Harris on their victory in the elections. He did so on November 8, when he assured that both have known each other “for almost 40 years” and assured that their relationship is “cordial.” “I know you are a great friend to Israel. I hope to be able, with you two, to further deepen the special alliance between the United States and Israel, “he said at the time on his Twitter account.

On Twitter, he also left a message for the Republican: “Thank you for the friendship you have shown to the state of Israel and to me personally, for recognizing Jerusalem and the Golan, for standing up to Iran, for the historic peace accords and for bringing the US-Israeli alliance at unprecedented levels. “

In this way, Netanyahu joined the list of world leaders who, in addition to recognizing the victory of the Democrat in the elections, have contacted him to begin taking the first steps of what will be the bilateral relationship between their countries during the future administration, which will begin on January 20. Among them are the French Emmanuel Macron, the British Boris Johnson, the German Angela Merkel and the Canadian Justin Trudeau.

The position contrasts with that of President Donald Trump, who continues to assure that the elections were fraudulent and that he is really the winner. Most of the Republican party has avoided recognizing Biden’s victory, indicating the need to wait for the completion of the lawsuits filed by the current president’s campaign.

A similar stance has been adopted by a number of heads of state, including the Mexican Andrés Manuel López Obrador (AMLO), the Brazilian Jair Bolsonaro and the Russian Vladimir Putin.

Netanyahu had been one of Trump’s closest leaders, largely as a consequence of his policy toward Israel. It was an open secret that, like most Israelis, he expected the real estate mogul to win the presidential elections. According to two recent polls, 63% of Israelis preferred Trump over Biden (17-18%), whose supporters were even fewer than the undecided (20%).

Despite the numbers, Biden has presented himself as an ally of Israel throughout his nearly five decades in public service. He visited the country for the first time in 1973 and in 2015 defended that the United States must keep its “sacred promise to protect the home of origin of the Jews.”

The change in the US Presidency may have implications for Israeli politics. Analysts estimated that, if Trump were reelected, there would be a high probability that Netnayahu would call new elections while, if Biden won, it was more likely that he would keep the unit executive with Beny Gantz, who should replace him in the presidency of the Government at the end of the next year.