Nestlé does not give in to the pandemic in its efforts to boost youth employability, through the V Meeting of Young People of the Pacific Alliance to be held in Chile on November 24 and 25.

This country will host the regional meeting in its fifth edition, now in virtual format due to the conditions facing the world, but with the necessary impact on youth unemployment and the alternation model as a concrete solution to combat it.

This year the theme is “Young people, employability and the impact of the pandemic”, to give visibility to the effects of the health emergency in the generation and search for employment of young people, presenting the alternation model as a solution to combat youth unemployment globally.

Since 2015, through Youth InitiativeNestlé’s global program focused on contributing to the effective entry into the world of work for new generations, the impact has reached more than 571 thousand young people in Mexico with vocational guidance and training for decent employment, but this year there is special emphasis given the current context .

The V Encuentro will reflect on ILO figures that indicate that at least one in six young people in the world is unemployed due to the health crisis. In addition, it is important to point out that in Mexico, the unemployed population in the country reaches 2.8 million people and the youth unemployment rate after the pandemic is 26.7 percent; while 49 percent of the unemployed are between 25 and 44 years old, according to the latest National Survey of Occupation and Employment, by INEGI.

Added to this, the most recent joint report by ECLAC and ILO warns that the effect of the health crisis is greater among young people due to the reduction of vacancies for the first jobs, less renewal of temporary contracts and trial periods.

Against this background, in this, the fifth edition of the event, young people between 18 and 29 years of age, from the member countries of the Pacific Alliance: Chile, Colombia, Mexico and Peru.

Specifically, it will be held over two days, with social, political, opinion and business leaders sharing their perspectives and forecasts on the situation; the good practices of the four countries to combat youth unemployment and how the pandemic has forced them to migrate from the traditional educational model to a hybrid one, demanding new ways of planning and addressing the digital divide, among others.

The meeting will be headed by Laurent Freixe, CEO of Nestlé for the Americas Zone, by Fausto Costa, Executive President of Nestlé Mexico and the Executive Presidents of Nestlé of the Chilean, Colombian and Peruvian markets. The attendance of representatives of the Ministries of Education, Labor, Economy and Foreign Relations of the four countries mentioned is also expected.

Young people from 18 to 29 years old can participate by free registration at the link www.jovenes2020.com to enter conferences, work tables and discussion panels with experts, government representatives and entrepreneurs who will share experiences, difficulties and processes to achieve success. 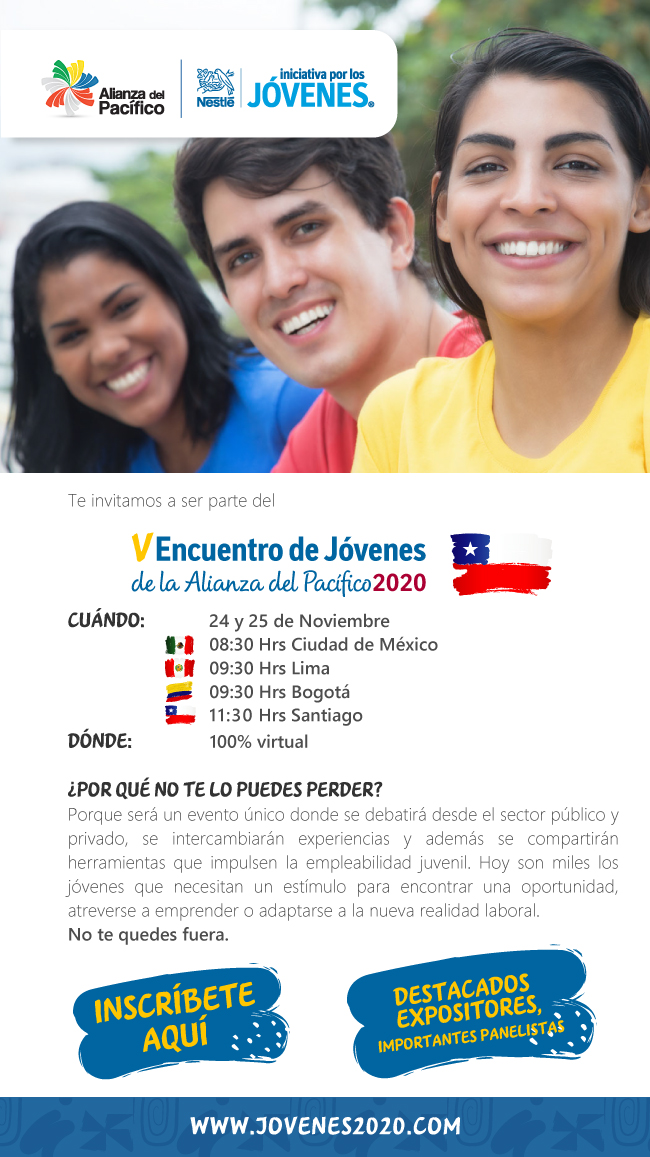