Annapurna is a distributor that is usually synonymous with quality and interesting games and this time it has teamed up with Ben Esposito (Donut County and the unlicensed experiment Sonic Dreams) to bring Neon White, a game that I would dare say there are quite a few people who have caught their attention. And it is that right off the bat they plant a trailer for us in the latest Nintendo Direct of a game that nobody knows anything about, starring killers with anime aesthetics, who go super fast and attack other enemies with letters. But what is this?

«Heaven needs someone to do its dirty work and that is why it has chosen the four deadliest assassins in hell, promising them that if they do this last job they will have a place in heaven. To do their job they will have to use the Souls Cards, which transform into different weapons and compete with each other to see who gets the long-awaited jackpot.

Neon Whites is a first-person action platformer inspired by turn-of-the-millennium animes and characters from cult action games. In the words of Esposito himself, designer and creator of the title: «Our goal is that if you saw this game at the beginning of the century on a demo disc, you would think it was the most brutal game on the entire disc. It is a wild and past game of thread. It’s a cheesy game with anime aesthetics made for geeks, by geeks.

Neon White’s combat system is based on cards that represent a series of weapons with limited uses, which we can discard ahead of time to make a special movement ability. As we eliminate enemies, new cards appear on the stage or in chests scattered around the world. All this while our assassins move at full speed using cards or discarding them to move faster. 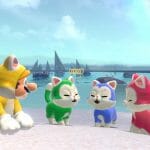 At the moment that is all the information we have about Neon White and what is expected by the end of this year for Nintendo Switch and Steam.