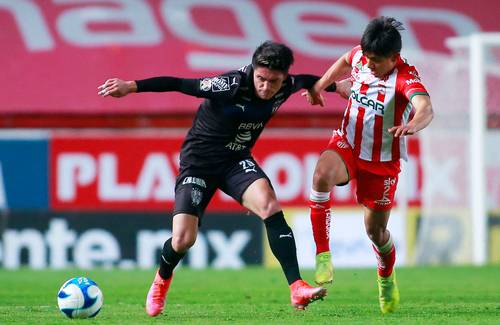 ▲ Jonathan González (left), from Monterrey, and Idekel Domínguez, from Necaxa, during the duel yesterday at the Victoria stadium. Afp photo

With a goal by Martín Barragán in the last minutes, Necaxa managed to rescue the 1-1 draw against Monterrey, which missed the opportunity to get the victory and place themselves in the first places of the classification, yesterday in a duel corresponding to the Day seven of the 2021 Guardianes tournament, played at the Victoria Stadium, in Aguascalientes.

Argentine Maximiliano Meza had overtaken Rayados at minute 35; However, Barragán took advantage of a rebound in the area to even the cards, at 80.

With this result, the Monterrey team stacked two games without victory and remained in the sixth rung of the general table, with 11 points, although they still have a pending duel.

In turn, the hydro-warm squad extended their streak of matches without winning to five and placed 13th with six units.

The team led by Javier Vasco Aguirre dominated most of the match. He was close to opening the scoring at minute 15 through the youthful Alfonso Alvarado, who took the place of the injured Rogelio Funes Mori; however, his shot was deflected over the goal line by Mario de Luna.

A few moments later, at the 24th, Jesús Gallardo also tried to pierce the Necaxa arch, but his shot went sideways.

The reward for Rayados’ impetus came at minute 35, when Avilés Hurtado seized the ball on the left side and from there sent a cross into the area, where Maximiliano Meza connected a low shot to beat the local goalkeeper, Luis Malagón.

In the second half, the goalkeeper of the Aguascalientes team could not continue on the court due to muscular problems and his place was taken by substitute goalkeeper Édgar Hernández.

The change in goal did not daunt the pupils of coach José Guadalupe Cruz, because at minute 48 they had the opportunity to score with a shot from Martín Barragán in the area, but Monterrey goalkeeper Hugo González managed to deflect the ball to keep intact his bow.

Later, there were two controversial plays for the Monterrey squad. The first was at minute 55, in a free kick taken by Miguel Layún; the local goalkeeper let the ball sting and although the play was reviewed in the VAR, the referee Luis Enrique Santander allowed the game to continue because, presumably, he did not have strong evidence to score the goal.

The second happened at minute 70, when Alfonso González was knocked down in the area and the whistler did not score any sanction.

At minute 80, when Rayados was already savoring the victory, Barragán appeared to get the 1-1 level, after capitalizing on a rebound in the center of the area and taking a shot that left goalkeeper Hugo González without a chance.

At the Benito Juárez Olympic Stadium, the Braves beat Mazatlán FC 1-0 with a goal from Da-río Lezcano.

Thanks to this triumph, the Ciudad Juárez team reached eight units and was momentarily ranked tenth in the general classification, while the Sinaloan squad was left with seven points in 12th place.

The score of the team led by Luis Fernando Flaco Tena came at minute 52, when Lezcano received a service from the right sector in the center of the area and finished off with a header to fit the ball into the back of the net and decree the final 1-0.