(CNN) – Forget those brutal cavemen grunts. Neanderthals, our closest ancestors, could have produced the same sounds that humans do today, according to a study that models the hearing ability of Stone Age hominins that became extinct about 40,000 years ago.

Determining whether Neanderthals and other human ancestors were capable of sophisticated spoken language has been a long-standing topic of debate in human evolution.

New research published Monday suggests that Neanderthals had a vocal communication system that could have been similar to human speech.

‘Neanderthals could have made all sounds in that frequency range, like us. There does not appear to be any difference in their ability to produce speech sounds. So they definitely could have said ‘hello’ or ‘ok’ if those expressions had any meaning to them, “said Rolf Quam, associate professor and director of the evolutionary studies program at Binghamton University in New York, in an email. .

Studying the evolution of language is notoriously complicated, the researchers said, since the soft tissue that makes up brains and vocal tracts is not preserved in the fossil record.

Fortunately, the bones that make up the auditory system have been preserved.

With the help of CT scans, the team created 3-D models to reconstruct how Neanderthals listened using information from the fossilized auditory structures of various Homo sapiens, Neanderthals, and earlier fossils of a group of hominids believed to be the ancestors. of Neanderthals.

They used this information to reverse engineer them to determine how they would have communicated. 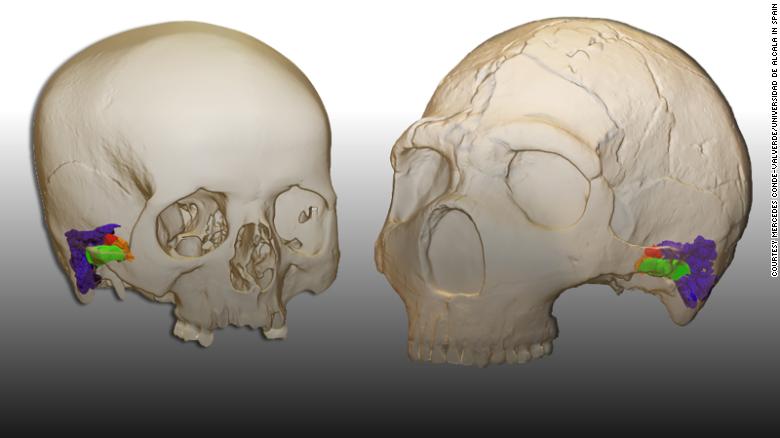 A virtual reconstruction of the ear in a modern human (left) and a Neanderthal skull. Whether Neanderthals and other human ancestors were capable of sophisticated spoken language has been a long-standing topic of debate in human evolution.

Quam said the research was “the first comprehensive study of Neanderthal hearing abilities” and considered more than 30 variables, including the ear canal, the eardrum, the bones of the ear and the air-filled spaces in the ear.

They were able to measure how the energy in sound travels from the surrounding environment through the ear canal, to the eardrum, through the tiny bones of the middle ear to the inner ear, a process called transmission of sound power.

This information helped the team calculate the occupied bandwidth, which is the frequency range in which at least 90% of the sound energy arrives.

This is the “frequency range in which we hear best,” Quam explained. “We still hear sounds outside of this range, but this range is a kind of ‘sweet spot’ where our ears are most attuned to sounds.”

They found that the bandwidth of Neanderthals was greater than that of the older hominin population. It was very similar to living humans and would have encompassed most of the sounds made in human language.

The research, published in the journal Nature Ecology & Evolution, suggested that Neanderthal speech would have involved increased use of consonants, a vocal signal that separates human speech and language from communication patterns in other primates, which are capable of emitting vocal sounds.

Many researchers now assume that Neanderthals led complex lives and would have developed the ability to speak, said Chris Stringer, research leader in human origins and professor at London’s Natural History Museum.

Recent archaeological finds suggest that they wore jewelry, produced art, and had their own rituals, suggesting that they were capable of symbolic thinking and the cognitive equivalents of early modern humans.

“Whether they had languages ​​as complex as ours is not something that can be determined from this research, as language is a product of the brain, not the auditory and vocal systems,” said Stringer, who was not involved in the study.

Alexander Stoessel, an evolutionary biologist at the Friedrich Schiller University of Jena in Germany who studies acoustic communication, said he largely agreed with the research findings. But Stoessel, who was not involved in the study, noted that his models had made assumptions about “soft tissue parameters” in the ear, something that can strongly influence sound transmission.

Neanderthals and early Homo sapiens lived in some of the same places and were likely found over a period of thousands of years before we emerged as the sole surviving hominin. Sometimes they had children, the evidence is in our DNA. Could they have chatted with each other?

«It is difficult to communicate with people from my neighboring countries. I doubt they spoke the same language, but I think they were able to communicate in one way or another, ”Stoessel said.

“They were having sex with each other, so one type of communication was likely.”