His team George Bartzokas Undoubtedly she is not in a good condition competitively and psychologically and this was seen in another game and in fact her problem “grew” against a very good opponent on Anantolou Efes, which really for three ten minutes did the ικά basics in defense and took the valuable victory with the emphatic 76-53.

The “free fall” found in Olympic scoring in Euroleague is fully proven by the five consecutive defeats that count, but what worries me most and most of all is that the Piraeus even now almost at the end of February in the final straight of the regular season of the Euroleague they have not found the necessary chemistry, they do not have stability in their performance on the floor and at the same time they are out of shape, which is due to the constant absences due to injuries.

All of the above were certified in Thursday’s game with his team Ergin Ataman, after the “red and whites” entered the game in an exceptional way scoring 26 points in the first period (26-11), but showing all their pathogenesis in the remaining three ten minutes they managed to score 27 points in 30 minutes!

In total 53 points –Which are a negative performance not only for this year but also historically– in the City against the Efes of Larkin – Mitsic Obviously, the victory would be a small miracle, but the impressive thing is the image of Bartzokas’ team from the first ten minutes to the other three.

Everything perfect in the beginning… 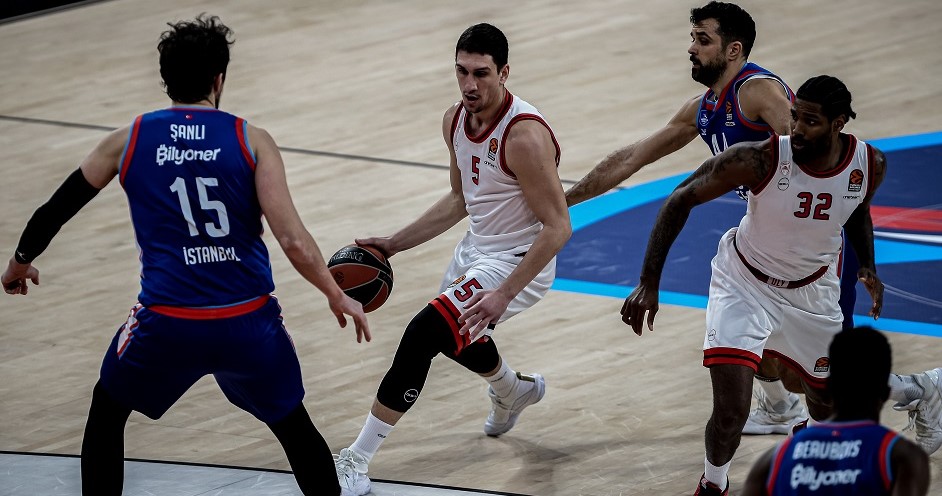 The start of the match in Polis for Olympiakos was really impressive and reminded of the start in the big double of Barcelona, ​​but in Turkey the Piraeus had no continuity and consistency in their image.

The +15 to 26-11 “Built” mainly by the defense, since the pressure on the opposing guards even when Shane Larkin stepped on the floor was proverbial by Slouka, Larentzaki and McKissick as a result, the “red and whites” find rhythm in the attack and have excellent percentages (7/11 two points, 4/6 three points) and all that with 8 assists of which 4 by Larentzakis (career record at the end with 7) and just 2 mistakes statistical “key” to… collapse afterwards!

In fact, it is impressive that the 26 “red” points in the beginning with Efes came without shots and were “clean” in basketball either from set attacks or in the transition.