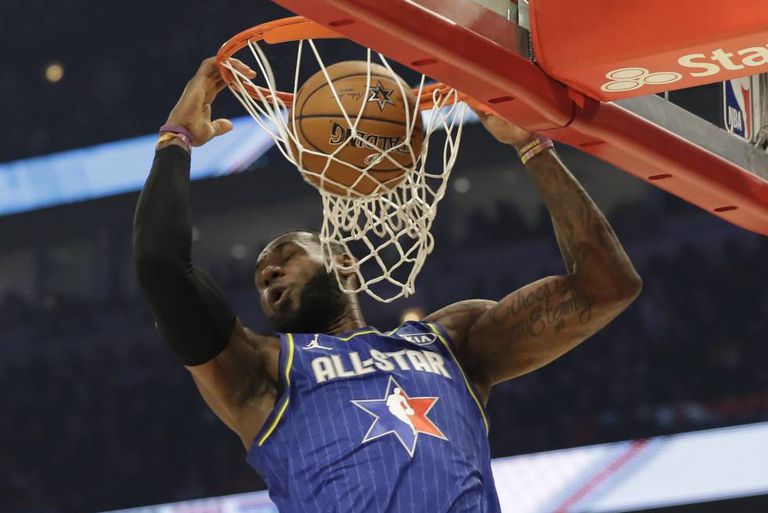 A LeBron James dunk at the 2020 All Star Nam Huh

The NBA All Star will be held for the first time on the same day instead of the usual weekend due to the covid pandemic. It will be played on March 7 at the State Farm Arena in Atlanta, the pavilion where the Hawks play. The skills and triples contests will be played from 00:30, Spanish peninsular time, in the early morning of Sunday 7 to Monday 8 March. The 70th edition of the All-Star Match will begin at 02:00 CET, and the slam dunk contest will take place during halftime.

LeBron James will be the captain of the Western Conference team and Kevin Durant, the Eastern Conference team. Both were the most voted by fans, with almost six million votes for the Lakers figure, and 5.5 million for the Nets. They will choose the teams among the 22 players who have been designated to play the match taking into account the vote of the fans, the press and the players themselves.

NBA All-Star 2021 to feature the Game and Skills competitions on one night for the first time on March 7. The NBA and NBPA are committing more than $ 2.5M toward HBCUs and provide support and awareness around equity and access to COVID-19 relief and vaccines.

In the Western Conference, the chosen quintet is the one formed by LeBron James, Kawhi Leonard, Nikola Jokic, Stephen Curry and Luka Doncic. The Slovenian was the second most voted base in the West by fans, with 3.3 million votes, but he was third behind Curry and also Lillard in both journalists ‘and players’ votes. The popular vote was the one that determined that Doncic, 21 years old and in his third season in the NBA, can form for the second time in the All Star starting quintet. This season he averages 291, points, 9.4 assists and 8.6 rebounds.

The five chosen as starters representing the Eastern Conference are Durant, Antetokounmpo, Embiid, Beal, the leading scorer this season with an average of 32.8 points, and Kyrie Irving.

The remaining 14 spots to be on the All Star will be chosen by the 30 NBA coaches. The top-rated players after those who made it into the starting five were Harden, LaVine, Tatum, Butler and Adebayo in the Eastern Conference and Lillard, Mitchell, Anthony Davis, Paul George and Zion Williamson in the Western Conference.

LeBron James’ team will be led by Quin Snyder, head coach of Utah Jazz, leading the West. Durant’s team will likely be Doc Rivers, if the Sixers win one of their next two games or the Bucks and Nets lose one of their games this week.

The game will be played under the same rules as last year in Chicago. Each of the first three quarters will last the usual 12 minutes. But in the fourth quarter a points target will be set and the first team to reach the set figure will win the match.

Several NBA stars, with LeBron James, at the helm demonstrated in recent days against the celebration of the All Star this season due to the pandemic and the heavy schedule they face. Adam Silver, NBA Commissioner, explained: “It is a global event for us, and we are doing our best to manage the situation, so affected by the pandemic. Of course, I’m listening to those who don’t think it’s a good idea. There were those who thought that we should not play without fans, they thought that we should not play in the bubble, they thought that we should not play because of the social justice issues that plague this country. No decision during this pandemic is made without uncertainty and without risk. This is another one of them but my job is to take into account all interests and, ultimately, it seems right to go ahead with the celebration of the All Star ”.

On the occasion of the appointment, the NBA and the Players Association have reached an agreement to donate 2.5 million dollars HBCU, institutions of higher learning established during the segregation stage, and also to support awareness about equity and access to the attention and the vaccines of the Covid-19.